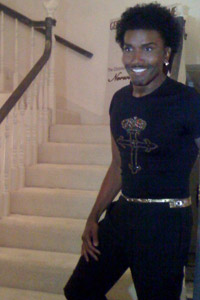 Last week I had the honor of visiting Youngwood Court. The, um, distinctive home on 3rd Street in Hancock Park encrusted in white iron and overflowing with dozens of tiny replicas of Michelangelo’s David. The occasion was the release of the book Getting Back To My Me, the autobiography of R&B singer Norwood Young, self-described “Recording artist, humanitarian and Hollywood socialite.” He is also the creator of this castle, which is as fascinating and mysterious as its owner. From the black Rolls Royce in the driveway to the backyard barbecue, every surface was ablaze in jewels and awash in glitter, mirror, and animal print. Was that was a real leopard hide hanging in the dining room? Dominating the entry of the once-modest single-story 1950s house is a massive winding staircase a la Sunset Boulevard.  Helpers ran out to touch up it’s white carpet before Norwood himself descended, regally clad in a bedazzled crown and cross T-shirt with matching velvet slippers. A podcaster quickly ducked behind a three-dimensional floor-to-ceiling sequined glove with the breaking news as we made our way to the backyard, where three different interview spots had been set up around the pool, itself festooned with a painting of Mr. Young and a herd of baby sea turtles. The highlight of the evening was an a capella concert. He’s a good singer –he won Star Search for crying out loud. You may know his 2007 album Just In Norwood. It features the tracks Jesus is Love and Sexual Amnesia. Several hours into the party came the reading from the new book and it was time to cut out. My constitution is just too delicate to hear about A Woman Named Superhead.