Home Things to Do The Best Things to Watch, Read, and Do in July 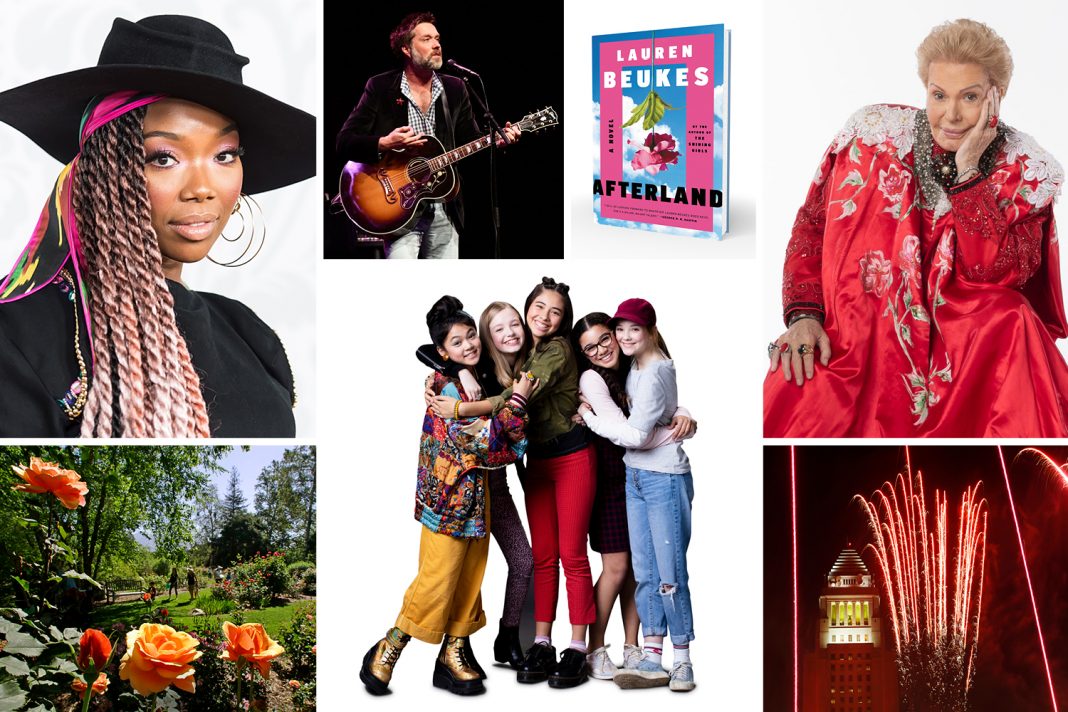 It’s another month in the bunker, L.A. Despite our collective eagerness to rejoin society, we’re still very much in the midst of a pandemic, and staying in (or going outdoors but avoiding crowds) whenever possible is still the best policy. The good news? There are plenty of ways to stay entertained.

For those who couldn’t get their hands on a ticket to Hamilton, the blockbuster musical debuts July 3 on Disney+. On July 8, CBS’s new competition show, Tough as Nails, puts people who work physically demanding jobs to the test. In the streaming world, Mucho Mucho Amor, the critically acclaimed doc about the life of extravagant Puerto Rican astrologer Walter Mercado, hits Netflix on July 8. The next day, The House of Ho, a Crazy Rich Asians-inspired docuseries about a wealthy Taiwanese family in Houston, premieres on HBO Max. Plus, NBCUniversal’s streamer, Peacock, launches July 15 with faves like Saturday Night Live, 30 Rock, and (eventually) The Office as well as original shows like a Saved by the Bell reboot and a series that looks at L.A.’s own Angelyne.

On July 10, English pop outfit Glass Animals serve up dreamy, nostalgia-tinged escapism on their third album, Dreamland, while Rufus Wainwright offers up Unfollow the Rules, featuring songs that he says “bubbled up” during his opera years. All The Time, the third album from Canadian avant-pop songstress Jessy Lanza, drops July 24 with effervescent beats, while beloved R&B icon Brandy—who was raised in Carson and famously went to prom with Kobe Bryant—returns with B7 (July 31) after an eight-year hiatus.

Charlie Kaufman’s debut novel, Antkind—filled with the same surreal humor as the Oscar-winning screenwriter’s movies—tells the story of a film critic’s quest to re-create a lost stop-motion masterpiece in order to save humanity (July 7). In You Again by Debra Jo Immergut, a 46-year-old woman begins stalking the spitting image of herself at 22 (July 7). Utopia Avenue, from best-selling Cloud Atlas author David Mitchell, chronicles a British band’s rise to fame and struggles with stardom (July 14). In Lauren Beukes’s post-pandemic thriller Afterland, a mother tries to protect her 12-year-old son—one of the last human males on Earth (July 28).

It’s more important than ever to get some fresh air, and there are plenty of parks and trails around the city that offer less-crowded alternatives to Lululemon-swarmed faves like Runyon Canyon. Head to Debs Park near the Arroyo Secco in Pasadena for sweeping views and a serene lake with ducks and turtles. Or, for a more leisurely outdoor experience, pack a picnic and park yourself in the pastoral meadows of the Kenneth Hahn State Recreation Area in Baldwin Hills. Descanso Gardens in La Cañada Flintridge, famous for its lush floral arrays, is open for visitors in a limited fashion, as is the Los Angeles County Arboretum in Arcadia.

Camp canceled? Conga Kids—a local nonprofit dance program—has been producing free interactive videos with dance and music lessons, arts activities, and more. Check out the California Science Center’s website to take advantage of Stuck at Home Science, a series of experiments for families using household supplies. Once it’s TV time, bond with your kid over Netflix’s nostalgic series reboot of the beloved The Baby-Sitters Club (July 3), in which Alicia Silverstone plays the mother of one of the tweener girls.

RELATED: Los Angeles County Now Has More COVID-19 Cases than Any Other County in the U.S.

What’s On in L.A. This Weekend: Concerts, Car Shows and More

What’s On in L.A. This Weekend: Festival of Philippine Arts and Culture, Fiesta Hermosa and More