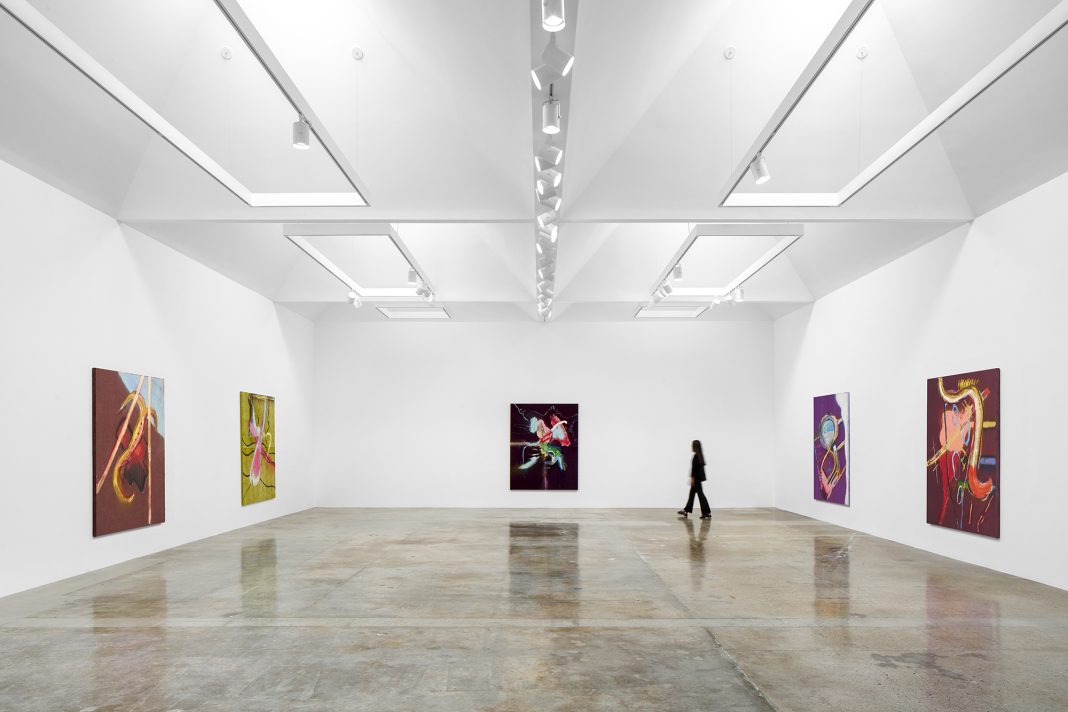 Share
Email
Facebook
Twitter
Pinterest
ReddIt
When Julian Schnabel first began making his now-iconic “Plate Paintings” in the late 1970’s, he found that the incongruity between the plates’ reflectivity and the depth of field afforded by the bondo affixing the dinnerware to the wooden panels “provided a space for conflict, and I could draw on top of it to find a place of stasis,” said Schnabel. “Velvet is like that because it’s so saturated with color. It was somebody else’s color, so I was commandeering it, but if you put modeling paste on top of it, and spray paint on top of that, it becomes a smooth surface.”

Those surfaces first appeared in 1980 in a series of black velvet paintings depicting friends and fellow artists (Andy Warhol, Joe Glasco, Stavros Niarchos) and various narrative constructs (Understanding Self-Hate; Private School in California) that some critics reduced to kitsch while others found them to be a breakthrough. For Schnabel, who seems to thrive on pushing the boundaries of painterly mores, materiality, and form—he paints with oil, gesso, crayon, Rhoplex, and dirt on tarps, flags, rugs, cowhide, Chinese scrolls, vintage maps, hopsack, inkjet prints of surfers and or an old drop cloth bleached in a way that resembled the waterways of Venice—velvet was just another challenge. Over the past four decades he’s exploited the surface tension, chromatic juxtapositions, and pictorial possibilities in numerous velvet series depicting everything from the operatic aura of Maria Callas to the ducks he spotted (and toasted a decade later with a group of young Spanish painters) while rowing a boat drunk, and eventually falling into, the lake of Madrid’s Parque del Buen Retiro in 1978.

“There are things I did in these paintings that I didn’t do in the first ones. I was less interested in the images,” says Schnabel, now 70, dressed in a white, half-zipped canvas jumpsuit, tattered and paint-splattered Vans, a well worn felt hat and his trademark blue lens sunglasses, as he walks me around his latest solo effort, “For Esmé — with Love and Squalor” which featuring a baker’s dozen of vibrant, ethereal velvet paintings to inaugurate Pace LA this past weekend with a star-studded opening that felt like a throwback to packed New York openings when Schnabel first started making velvet works. The show also announces Pace’s second foray into Los Angeles—Pace Wildenstein had a brief run in the late 90’s—this time as a partnership with the principles of Kayne Griffin Gallery at their mid-city space on South La Brea opposite David Kordansky Gallery. 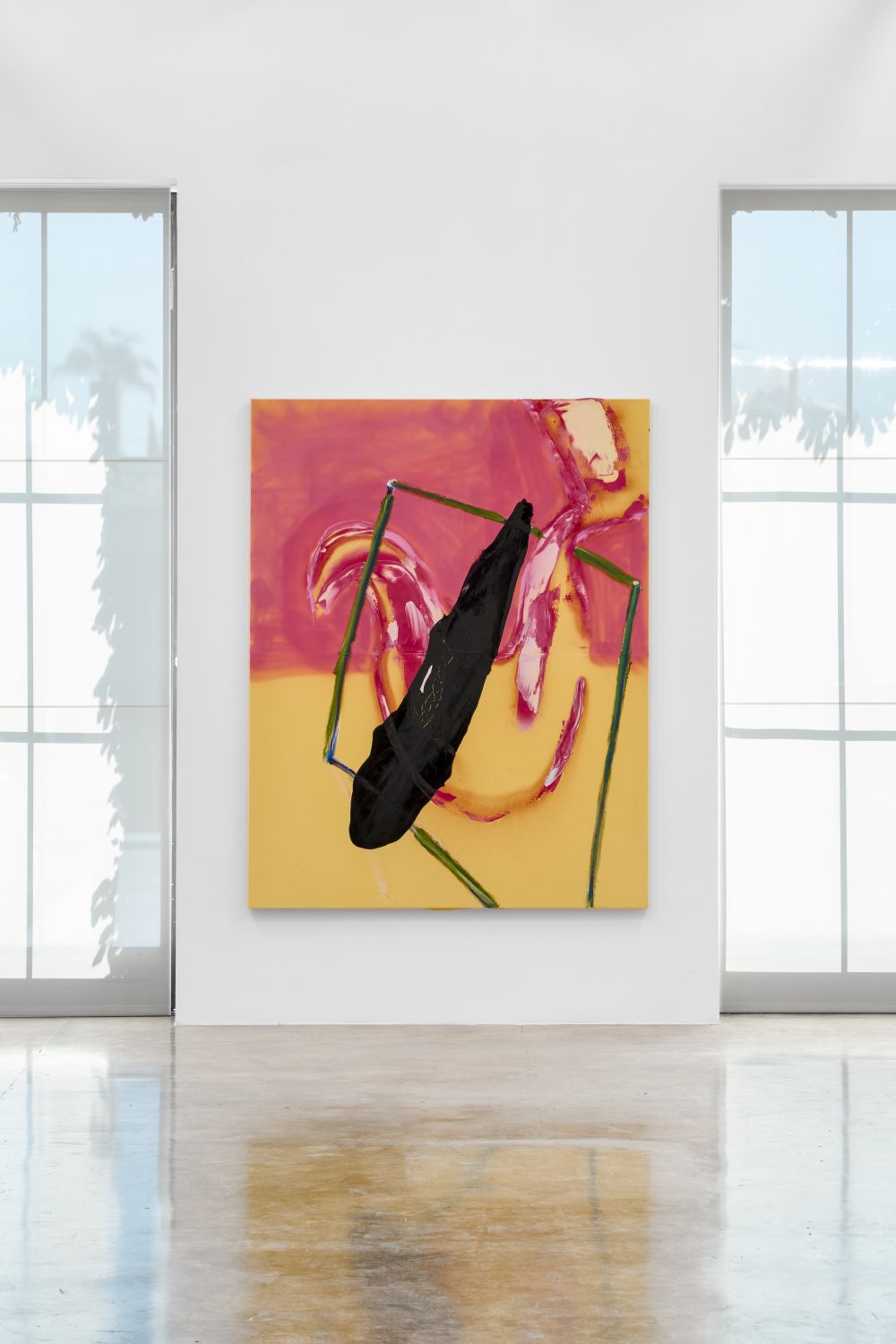 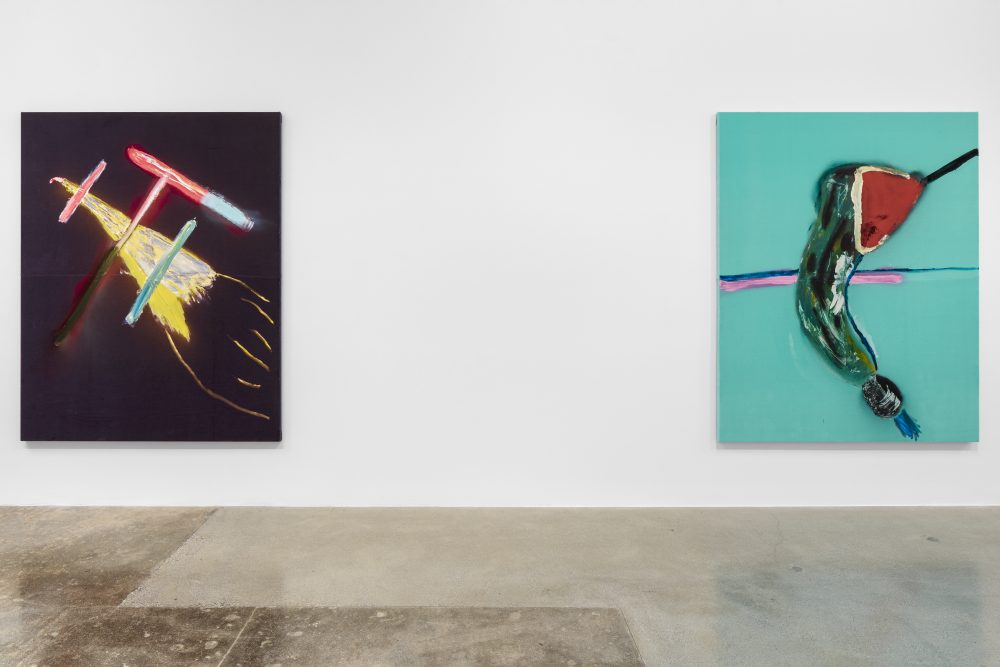 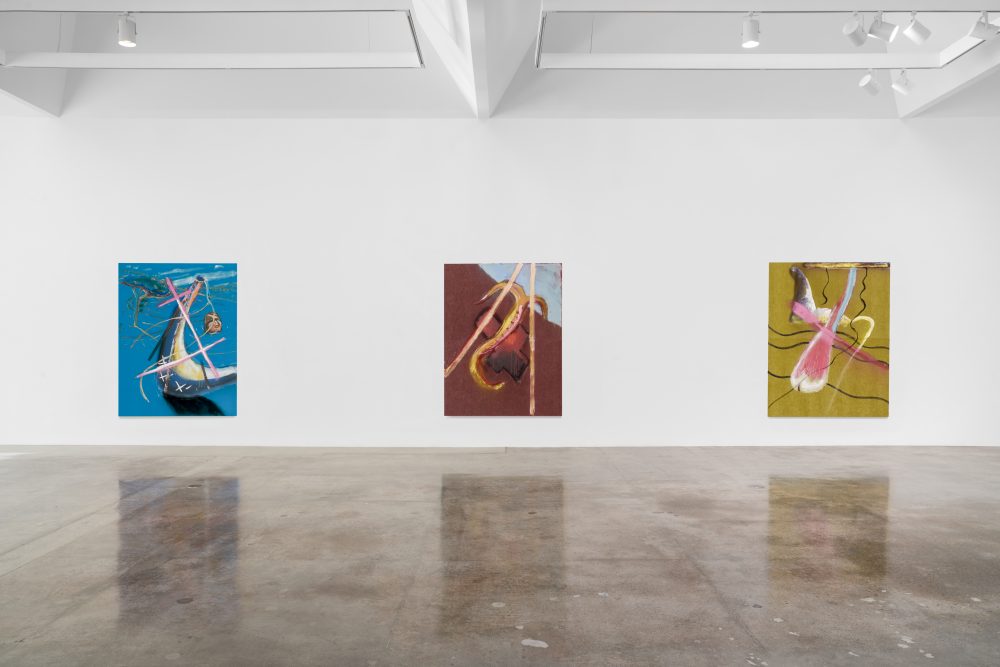 “There is the art world before Julian Schnabel and there is the art world after Julian Schnabel,” Pace CEO Marc Glimcher told a crowd under the cover of the gallery’s bougainvillea-shaded, James Turrell-designed patio during a preview before the opening. For Bill Griffin, who started the gallery with Maggie Kayne (and James Corcoran) in 2011, the decision to have Schnabel inaugurate the venture was a full circle moment. When he first moved to LA in the early 90s and was living out of a Venice garage next to Ed Ruscha’s studio, it was Schnabel’s Every Silver Lining Has a Cloud album that Griffin was listening to on repeat. Schnabel joked that Griffin must have been part of a very select audience, but he seemed proud to recall the album which featured piano and vocals from Parliament Funkadelic’s Bernie Worrell and Gary Oldman, and string and brass arrangements from the Pulitzer-winning saxophonist Henry Threadgill.

“I’ve never made paintings to have a show. I’m not a guy who ever did his homework,” Schnabel told me on our walkthrough, but around the time he decided to make some new velvet paintings at the beginning of the year his wife was designing a space for some friends so he accompanied her to Zuber, the august French upholstery and wallpaper manufacturer that dates back to the 18th century. At the atelier he got turned on by the plush velvet swatches at the company’s showroom. “I tried to order some velvet from Zuber and the woman said it takes two months,” he explains. “So I just went to one of those places in the design district where you can get it immediately.”

The exhibition’s title, as with all of Schnabel’s titles, came toward the end of the painting process. The titular Salinger story tells the tale of an American soldier, who is trying to be a short story writer, training with a British intelligence unit destined for a D-Day deployment. At a tearoom in Devon, England he encounters a precocious teenager, Esmé, whose voice he noticed while she was singing with a youth choir in the local church. They get to talking in the tearoom and she asks if he’ll write a story for her that’s full of love and squalor. It’s a heady ask from a young girl, but the soldier promises he will do his best and she promises to start a correspondence with him. Skip ahead to several weeks after V-E Day, in Bavaria, we meet Staff Sergeant X, a shellshocked veteran struggling with PTSD, who finds the letter from Esmé was written to him. Maybe she’s alive, maybe not. Once the fog of war clears will this soldier ever find her, or peace? For Schnabel, who named his five-month old Esmé, it’s a story that is filled with possibility and that hope is channeled into 13 new velvet paintings, all created in 2022, and a 40 years-in-the-making, bricolage bronze and steel sculpture in the courtyard.

“They’re quite simple,” says Schnabel of the new paintings. “Some are more complicated than others, but this addition and subtraction, this way of scraping paint off and adding more makes it very rough. You get these echoes of lines. I made some spray paintings years ago where I was painting from behind the canvas and it came out the front very tubular. I keep trying to make painting interesting and fun for myself. What I like about it is that there’s no answer. The thing about making movies, everyone wants to know what it means. But if they ask, ‘Why did you paint that mark?’ I don’t know, I felt like it.”

Schnabel was also channeling hope—or at least optimism—in the very act of painting. “I painted these with my left arm,” he admits. “Is that optimism? Yeah, my body is falling apart on me. I’ve been surfing since I was fifteen and I had a shoulder operation on my right arm after four months of stem cell injections, which didn’t really work. My arm still hurts. I can’t do some of the things I did when I was younger.”

As a southpaw he did manage to make a titular homage to the 1951 Albert Lewin film Pandora and the Flying Dutchman and another to Mickey Rourke, Wild Cathedral Evening or Second Painting for Mickey Rourke, which is a follow-up to a 1982 painting he made for the actor while Rourke was starring in Francis Ford Coppola’s Rumble Fish. Both are toothy ventures in mark-making with oil, spray paint and modeling paste atop syrupy purple velvet. Another painting on a marbled yellow velvet is interrupted by a crude green line that led Schnabel to dedicate it to the minimalist sculptor Fred Sandbeck. All the paintings are made from two yardages of velvet stitched together, and on two pieces of nappy robin’s egg-hued fabric he painted a hummingbird-like figure that might also represent a few appendages. “Is it my arm? Is it Marlon Brando’s boxing glove? Is it a street because there’s a blue line there?” asks Schnabel, seemingly searching for the answer as we spoke. “The title of the painting is Waiting for Bread. Did I do that because I had a shoulder operation four weeks ago?” The arguable hero painting of the show,  The Chimes of Freedom Flashing, was made during a period when Schnabel was coming back to the Bob Dylan protest song, Chimes of Freedom, and the dance of heaving and feathery marks seems to evoke the central tension in the show: hope amidst darkness.  That painting is also an oblique reference to the artist’s first adult painting Jack the Bellboy/A Season in Hell. “You have your points of reference and you let them take you somewhere where you haven’t gone yet.”

The same might be true of the show’s piece de resistance, ESMÉ, a 20 foot tall bronze and steel franken-sculpture which Schnabel asked Pace to remove the gravel from the courtyard and site the work on red lava stones. The work is a fragemented mix of parts from previous sculptures and discarded molds he recycled in the early 80’s.

“I started that piece 40 years ago. In 1982, I made a sculpture of Balzac and Balzac turned into Helen of Troy, and then Helen of Troy turned into Gradiva and Gradiva turned into Golem and part of Gradiva became Ahab, and Ahab became Esmé,” explains Schnabel of the white totemic form surrounded by greenery (and backgrounded, as one can only do in La La Land, by a billboard of that same sculpture) that has the profile of a war plane with a broken ladder hanging off the side. It’s Icarus and and the Tower of Babel and a crucifix all rolled into one heaving, if elevating, architecture.

“I had written INRI on there because I thought it looked like a memory of the crucifixion but I also thought it looked like the trees with the heads and body parts on them in The Disasters of War etchings by Goya. You can’t have your head like an ostrich in the ground right now. To write E-S-M-E is very formally different from INRI and it’s a very different connotation. To think of bringing a five month old into this world and this maniac [Putin] is threatening people with nuclear bombs. You can’t get away from what’s happening to these people [in Ukraine]. They bombed a railway station the other day while people were trying to leave? Why? What the fuck?” asks Schnabel, taking his glasses off as he takes a deep breath.  “I’m not a politician, but if you’re bringing somebody into this world how do you give them the tools to navigate through that? Esmé likes these paintings. It’s about hope.”