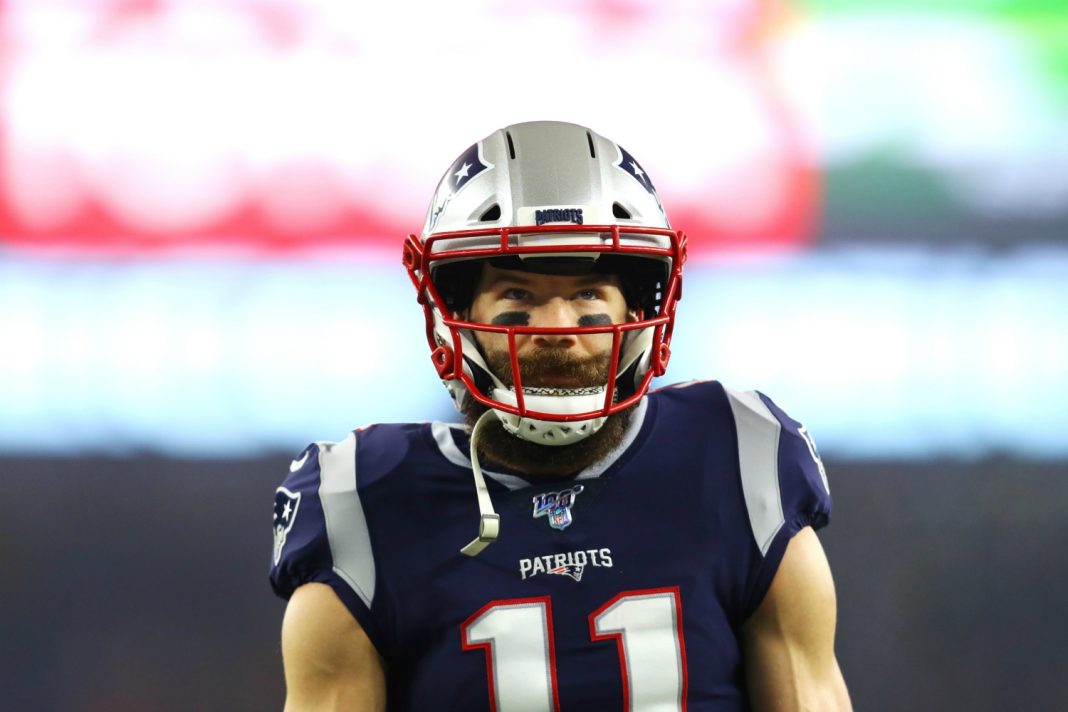 Star NFL receiver Julian Edelman is spending some of the offseason in Los Angeles studying for his bar mitzvah. Edelman, a three-time Super Bowl champ, attended a charity event at the Waldorf Astoria Beverly Hills on March 3, where we chatted about a few things, including his faith—and what he thinks of his longtime New England Patriots teammate Tom Brady’s football future.

In his 2017 memoir, Relentless, Edelman revealed that his paternal great-grandfather was Jewish and that he speaks weekly to a “Rabbi Yossi in Los Angeles.” Edelman has also traveled to Israel and expressed support for the victims of the Pittsburgh synagogue shooting.

“My dad is Jewish,” Edelman, 33, explained before a banquet thrown by the Ruderman Family Foundation honoring filmmakers Peter and Bobby Farrelly. Edelman was enjoying a beverage with his business partner Assaf Swissa and a friend from Massachusetts named Amanda. “I’m going to have a Bar Mitzvah here soon,” Edelman says. “I speak with a Rabbi every Friday. He’s from out here.”

Edelman said he has attended synagogue during football season. “I go to her temple in Boston,” he said, nodding at Amanda. “I only go once a year.”

Edelman’s relationship with religion has been evolving. Before the Super Bowl in February 2012, he told reporters, “I’m not completely Jewish, if you know what I mean. I know people want me to be. My father is Jewish. My mother isn’t. I’ve been asked this before. I guess you could say I’m kind of Jewish but not really.”

He did not specify a date for his bar mitzvah, an event that would cement him into the faith. The ceremony traditionally celebrates a 13-year-old’s passage into religious adulthood, but men sometimes undergo the ceremony at later ages. (A friend of mine who converted to marry a woman who is part of a very religious Jewish family went even further, undergoing a circumcision in his late 20s. Edelman and I did not discuss this possibility.)

Training camp starts in the summer, so the bar mitzvah, if soon, would have to be in the next few months.

It was reported in August 2019 that Edelman and Swissa were developing a scripted show Edelman described as “a football rom-com.” At that time, Edelman revealed that he wouldn’t star in it, but would certainly have a role. He even made an appointment with famed acting coach Shannon Sturges, who has worked with Jennifer Lopez and Will Smith.

Could the Bar Mitzvah be some kind of publicity stunt, something heartfelt that was nevertheless being treated as a promotional opportunity? Asked for more details, Swissa said they were working on “something big” involving the bar mitzvah and preferred not to reveal more at this time.

Edelman’s time in L.A. has also included an arrest on suspicion of misdemeanor vandalism after jumping on the hood of someone’s car in Beverly Hills on January 11, authorities said. He has a reported court date of April 13.

For now, the details of his Bar Mitzvah will have to be as unknown as Brady’s football future. There has been speculation that Brady will end up leading the Los Angeles Chargers as they move this coming season into the new stadium they are sharing with the Rams.

“No clue,” Edelman said of Brady’s next move. “He keeps everyone in the dark.”