Home Celebrity Judd Apatow and Pete Holmes Talk to Us About Their HBO Series,... 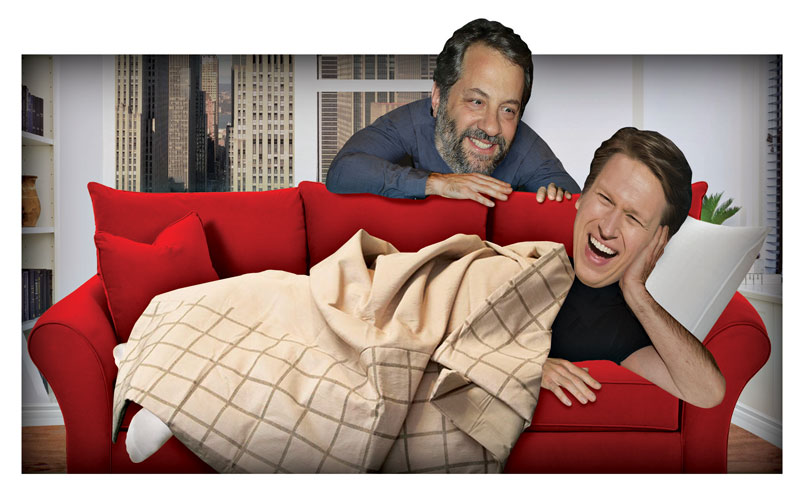 Sometimes good comedy requires a little divine intervention. Or so producer Judd Apatow (Anchorman, Trainwreck) and comedian Pete Holmes say. In the case of their HBO series, Crashing (out February 19), the miracle that led to its creation was rather modest. Apatow agreed to appear on Holmes’s podcast, You Made It Weird, in 2012, though he knew nothing of Holmes or the show. Nevertheless a heavenly collaboration was born. The Apatow-produced Crashing stars Holmes as a younger version of himself: an up-and-coming comic who couch-surfs with friends in New York after he catches his wife in flagrante. Despite the show’s East Coast backdrop, Apatow and Holmes are L.A. through and through. Here they banter about stand-up and why honesty is the best policy.

On Setting : Crashing in New York vs. L.A.

Holmes: “There’s something perfect about starting comedy in New York because New York and comedy both don’t need you. They’ll be fine.”

Apatow: “People are so strong there. Sometimes I think about the scene I started in, at the Improv in Los Angeles in the late ’80s and early ’90s. There was a lot of very original comedy happening, but I don’t remember us crushing like people do now.”

Holmes: “New York comics do stand-up every night, multiple times, so you can grow exponentially.”

On Portraying Stand-Up on Television

Apatow: “What I like about the show is that Pete’s character is religious. He’s trying to keep his soul while entering somewhat of a dark world. It’s fun to see someone trying to be a good person surrounded by people on the edge.”

Holmes: “A lot of shows about comedy pick up when it’s already up and running. We wanted to show another side of it, which is a guy on the outside peering over the fence at the warm, cozy place where he wants to be.”

On Truth Winning Out Over Laughs

Apatow: “When I worked with Garry Shandling, it was always about getting to the truth. How funny do we want this to be? How close to reality is it? People’s hopes and dreams and obstacles are always fascinating, so it’s more about the fact that a lot of people don’t bother to dig deep—or they don’t want to.”

Holmes: “There are great jokes, and then there’s that real heart area. The other day we were watching an episode of Crashing, and there’s a very heavy moment. There was a take that had a joke in it, but it was one of those things where you’re like, ‘Why on earth would Pete make a joke at that moment?’ And we said, ‘He wouldn’t.’ That’s Garry’s Larry Sanders thing; that’s the Judd thing of ‘maybe it’s better to let this play.’ We’re trying to be very funny, but once we get you trusting the show, we don’t want to betray that for a cheap laugh.”

Apatow: “If you have somebody like Pete who’s willing to tell you every horrible thing he’s ever done or thought, there’s a lot of comedy there because we all relate to that struggle.”