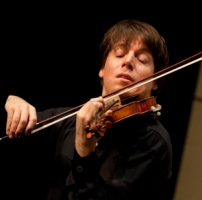 It’s not every day that one gets to hear a Stradivarius played by a world-renowned violinist. The instrument? The 1713 “Huberman” Strad, which was purchased 11 years ago for almost $4 million. The virtuoso? Joshua Bell.

On Tuesday night at the Hollywood Bowl, he spellbound the audience with a repertoire of romantic and contemporary pieces including Mendelssohn’s Violin Concerto in E minor, Op. 64, and the West Coast premiere of solo classical bassist and composer Edgar Meyer’s Double Concerto for Violin, Double Bass, and Orchestra. Bell will have the chance to do it again tonight at 8 p.m.

Bell himself commissioned the Meyer piece, an impressive, three-movement concerto that showcased both artists’ skills, while the Los Angeles Philharmonic conducted by Ludovic Morlot accompanied them. All three movements featured contrasting melodies that somehow worked together masterfully. Hats off to Meyer, whom Bell met at the age of 14, for performing his notable composition with grace and passion. The tour de force performance left the audience yearning to break the rules and applaud between movements. Instead, several people simply whispered, “wow” and “amazing.”

As for the Mendelssohn, everyone who saw the show is forever indebted to Bell and the LA Phil (conducted by Ludovic Morlot) for last night’s performance. The beloved Concerto has been performed innumerable times by violinists around the world. On Tuesday, I felt as though I were listening to it for the first time. Bell passionately and flawlessly executed the entire solo as well as his original cadenzas. His technique was perfect, and every note on the Stradivarius resonated with precision, elegance, and majesty.

It may seem redundant to praise a multiple Grammy Award-winner like Bell, but hearing him perform live was a revelation. He is a master of the violin and worthy of every standing ovation he has received.