Home TV Jon Hamm Can Beat You in a Staring Contest and Other Lessons... 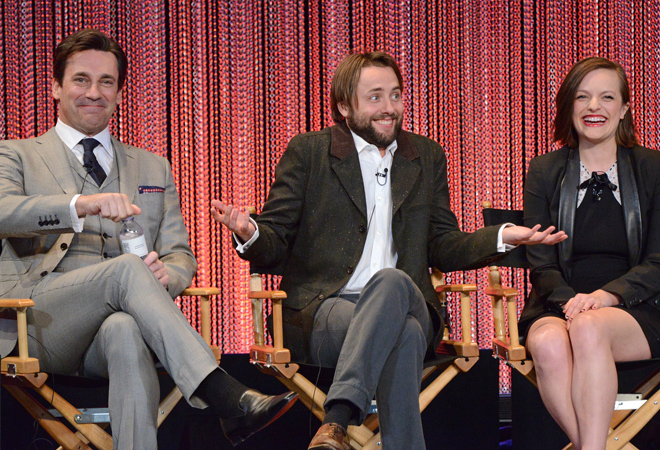 The end is nigh. That much was clear from a PaleyFest panel on March 21 anticipating the seventh and final season of Mad Men, during which Christina Hendricks (AKA the sassy Joan Harris) declared, “I’ve already started grieving.”

“All of a sudden it’s over, and you walk around the house and put the Celtics on,” said Robert Morse, who plays Sterling Cooper’s eccentric senior partner Bertram Cooper.

The cast, though nostalgic, looked relaxed and chic in their modern finery: Hamm in a slim three-piece suit, Hendricks in flowing emerald chiffon, Moss in sherbet stilettos, and Shipka in an elegant, beaded floral sheath dress.

The evening’s zaniest moment came when a fan, writing in via the festival’s app, asked about the series’ use of silence. “Jon, you want to grab that?” Schneider quipped. Hamm’s mock stony reticence devolved into a minute-long staring contest that ended when a strained looking Hamm finally blinked.

Some highlights from the evening:

Matthew Weiner, in a surprise cameo intro:
“Is it hard to end a show? Yes. It’s really, really hard.”

Hendricks: “Peggy helps change Joan’s strategy. She sees how hard she works, and the results are climbing the ladder and success and acknowledgement. I think that’s affected how Joan’s proceeded in the last couple seasons. Now [Peggy’s] become a teacher in many ways.”

On how the series will end:
Hamm: “I think some of us know where our characters are going to be. I don’t think any of us have any idea what the scope or look or tone of the whole will be.”

On whether the cast ever dreams about the show:
Morse: “I dream of Joanie.”

On becoming the next Mrs. Draper:
Paré: “She came in and said, ‘I don’t know how to do this—but I need to measure your ring finger.’ And I was like, ‘Yes!!!’”

On wrapping the series pilot with Weiner:
Moss: “We were standing on the roof and looking at the skyline. The sun had just set. We looked at each other and said, ‘That was really wonderful. I really hope we get to come back and do it again.’”