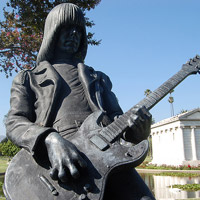 It’s time you dug into the depths of your closet to retrieve those battered Chuck Taylors, torn band T-shirts, and leather jackets permanently infused with the stench of cigarettes and sweat. Why? The 8th Annual Johnny Ramone Tribute at Hollywood Forever Cemetry.

Though the cremated remains of the legendary Ramones guitar player are shelved comfortably in the home of his wife, Linda, fans have long speculated that they’re stored in the base of his 8-foot tall bronze cenotaph (Section 8, Lot 2067; Dee Dee Ramone is also buried at Hollywood Forever not far from Johnny.) On Sunday, thousands of Ramones fans will head to Hollywood’s most famous graveyard-turned-movie theater to celebrate the pioneering New York group, who many consider to be the most important punk band in the world. As the sun sets over William Clark’s Mausoleum Lake, guests will watch King Creole starring Elvis (who Johnny adored) and hang out with special guests Tommy Ramone, Steve Jones, Henry Rollins, Rose McGowan, and Priscilla Presley.

In honor of Johnny, his supercharged 1950s rock songs, and his obsession with Top 10 lists, here’s our list of the Top 5 Bands Influenced by Johnny’s Down Stroke 8th Note Guitar Style.

1. The Descendants – Formed in Manhattan Beach in 1978, this band pioneered modern-day skate punk, pop punk, and melodic hardcore. Via Six Degrees of Separation (or Kevin Bacon) the Ramones influenced NOFX, Blink 182, Green Day, The Offspring, and The Ataris — to name just a few. The the list goes on and on.

2. Misfits – Before their music morphed into its own genre of “horror punk,” their early shows at CBGB in New York (circa 1977) were heavily influence by the Ramones. Marky Ramone was recruited to play drums on the Misfits 25th anniversary tour.

3. Black Flag — Hailing from Hermosa Beach, their sound combined the raw simplicity of the Ramones with frequent tonal shifts and atonal guitar solos, launching the career of Henry Rollins, who will be on hand for this year’s tribute.

4. Dead Kennedys — In a career not short on controversy, the band and their frontman Jello Biafra had a significant influence on the UK and European punk scenes. They were also known for their straightforward “here’s what we think” lyrics.

5. Bad Religion – Lead singer Greg Graffin referred to their early influences as “pop-sounding rock tunes that were not necessarily commercial.” Hmm… sounds pretty Ramones-ish. The band even covered “We’re a Happy Family” for the “Gaba Gaba Hey: A Tribute to the Ramones” album.