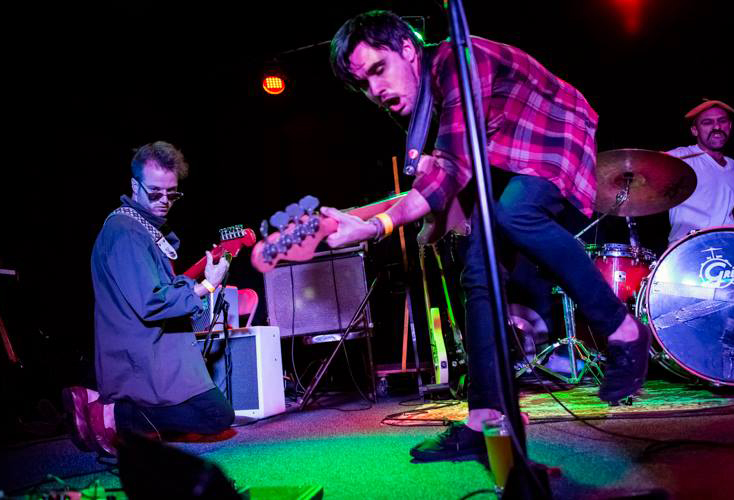 The end of summer is approaching, but it’s not the end of free (or deeply discounted) concert nights at local clubs. Here are the music residencies in Los Angeles for the month of August.

Cotillon at the Echo (August 5, 12, and 19; August 26 at the Echoplex):
The August residency for the power-pop troupe comes in support of White Roses, its brand-new EP. The final night, with local fave the Dead Ships on the bill, will take place at the larger Echoplex, directly under the Echo.
Think: Hook-laden power pop from a band that has likely worn out several copies of Weezer’s Pinkerton.
Listen: via Soundcloud

Kiev at the Bootleg Bar (August 5, 12, 19, and 26):
With a new album due out soon, the L.A.-based quintet will likely sprinkle new tracks throughout their four-week stint. The record’s first track, “Falling Bough,” premiered on KROQ on July 28.
Think: A dive bar jukebox perched halfway between Wilco and The Black Keys.
Listen: via Spotify

The Cooling Time at Silverlake Lounge (August 5, 12, 19, and 26):
With four dates at the Silverlake Lounge, the Cooling Time returns from a lengthy hiatus with new tunes including standout track “Redwoods.” The five-piece band is preparing a full-length album for release in early 2014.
Think: KROQ-ready rock with a sense of melody.
Listen: via Soundcloud

Light FM at Club Los Globos (August 6, 13, 20 and 27):
There are few bands with the pedigree of Light FM, which opened for the Smashing Pumpkins, performed at three different editions of South by Southwest, and released four full-length albums. The lineup has changed around frontman Josiah Mazzaschi, but the signature sound remains the same as the band readies its latest LP.
Think: The jangly pop of ’80s college radio crossed with the buzzy edge of ’90s shoegaze bands like Black Tambourine.
Listen: via Soundcloud

The Janks at the Satellite (August 5, 12, 19, and 26):
Though the band has gone through several lineup changes (to the point where singer Zachary Zmed is the lone constant), the sound remains the same: melodic folk rock that’s equally appropriate in coffeehouses or on AM radio stations. The band is finishing work on a new EP, originally set to be released sometime this month.
Think: The Kinks, run through a Beach Boys filter.
Listen: via Soundcloud

Johnny Madcap and the Distractions at the Redwood Bar (August 2, 9, 16, 23, and 30):
With one album and one EP under its belt, Johnny Madcap and the Distractions have enough material to play a full set. For its residency at the Redwood Bar, the band is going a step further, playing one set of originals then another filled with covers of classic tunes.
Think: Elvis Costello mixed with… more Elvis Costello. Seriously, odds are they can play “Radio Radio” at a moment’s notice.
Listen: via Spotify

How Monday Became the Best Night to See Live Music in L.A.