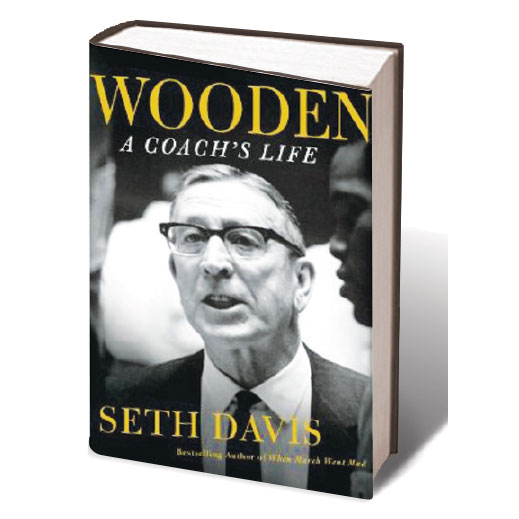 The stack of books about John Wooden looms as large as his shadow over college basketball, but you have to go back to 1974’s The Wizard of Westwood: Coach John Wooden and His UCLA Bruins to find a traditional biography. Wooden: A Coach’s Life, out this month by L.A. writer Seth Davis, changes that. Davis, who also covers college basketball for CBS, interviewed more than 200 people, devoting as much attention to the late coach’s adolescence in Indiana as his triumphs at UCLA. We caught up with Davis as he was reporting on a tournament in the Bahamas.

What was John Wooden, the man, like?
To be with him and to be in his presence is really one of the most special experiences I’ve had as a reporter. Just his beautiful mind, just to be with a 96-year-old man dropping line after line of poetry and the modesty of how he lived in this little apartment in Encino. He had everything he needed there. He had utter, complete peace of mind. He was charming, warm, kind, disarming. He was so easy to be around; it was as easy as talking to your best friend, and everyone who was with him felt like that. Everyone wanted a piece of him, and he never turned anyone down. He always left you with something to think about. I can’t say that I knew him, because so many other people had the same experience, but I’ll always treasure those memories.

Given that he was so beloved, was it tough to get people to open up about the rougher aspects of his personality?
It was surprisingly easy. I’d call someone who played for Wooden in 1960 and explain that all I know is the sweet old guy in the den who reads poetry. And, inevitably, I’d hear a chuckle on the other line, and they’d tell me, ‘I didn’t play for that guy.’ A lot of them left UCLA feeling ambivalent or even not liking him or their experience playing for him. But as they grew older and become dads and granddads and make sense of what he taught them, they could go back to him and talk about it over breakfast. He called them ‘his boys’ and he always had time for them. I went to South Bend and talked to guys who played for his high school teams, and the stories started flying. To me, that made him more interesting.

Are there any subjects that remain unanswered after having done so much research?
One question no one had ever asked him is why he went to UCLA in the first place. He was from Indiana, it was all he knew, and UCLA at the time was a very downtrodden program. He was only in his second year at Indiana State and just played for a national championship. My only speculation was that I saw some reportage that he was becoming wary of the expectations he created. Aside from that, it doesn’t make sense to me. He had opportunities to leave, but he had stayed, and it never was clear to me why he felt so compelled to leave that he took his family to the other end of the earth.

What interview stood out to you the most?
Speaking to Bill Walton at The Final Four in New Orleans, because I chased him for two years. He didn’t want to do it but he’s too nice to say ‘no.’ It was the morning after the championship game, and we went into the courtyard of his hotel and talked for an hour. He’s a really beautiful guy, a wonderful person. The fact that he did that was great.