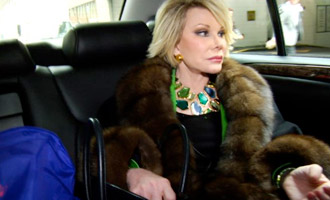 In this month’s L.A. Archetype, Joan Rivers impersonator Terri Navarra talks about hesitating to approach Rivers at a party last year. “You never know how people feel about being impersonated,” she says. I’d bet that Navarra would change her mind after seeing Joan Rivers: A Piece of Work, the critically-acclaimed documentary out in theatres now. According to the film, any measure of attention quenches the 77-year-old comedienne, who admits that she only finds happiness onstage (cough cough, you have a daughter, Joan). Rivers’ only caveat is artistic larceny; she sued impersonator Frank Marino for $5,000,000 in 1986 for using her material.

A Piece of Work begins with an uncomfortably close look at Rivers’ botox-mangled face as she paints on her daily mask of makeup. The clever opening reveals the film’s motif: the more you get to know Joan Rivers, the less you want to. Following a recent year in her life, the film pivots on Rivers’ staunch resistance of retirement and obsolescence. “I will wear a diaper. I don’t give a shit,” she says in her legendary, Brooklyn-accented rasp during a conference call with a potential gig. Joan’s endearment in the film, though meager, lies in her ability to maintain a sense of humor throughout. Her manager, Billy Sammeth, laughs remembering Joan donning sunglasses to shield herself from her the blinding white of her calendar pages. Shots of Rivers performing her routine prove her material to be much lewder, of course. It’s raunchy, politically incorrect, and tinged with Woody Allen’s brand of Jewish angst. “And now presenting,” she jokes about herself, “the funniest Jewess not in the ovens, Joan Rosenberg.”

I saw the film last week with my grandmother, who idealized Rivers on our way to the theatre, calling her “the first person who told the truth.” My grandma expressed sympathy for Rivers’ difficult lot, which the film addresses in earnest, from Rivers’ ostracism by her mentor, Johnny Carson, to her husband’s suicide after being let go from Fox’s The Late Show Starring Joan Rivers (Joan protested the firing and was asked to leave the show herself before his death) to more recent painful episodes, like her abandonment by longtime manager Sammeth. “He was my last memory bank,” she says, a tear creeping down her foundation-caked cheek. When you’re looking at an attention-starved narcissist who insists on living in an apartment fit for royalty, though, it’s tough to determine her sincerity. In any case, Rivers’ mourning of Billy had nothing to do with him—and everything to do with him as an extension of her.

The most unfortunate victim of Rivers’ ambition has been her daughter, Melissa. The story climaxes when mother and daughter are invited onto Celebrity Apprentice. Before they tape, Joan goes on about sacrificing herself in order to protect her daughter from experiencing shame on TV, which Melissa dismisses as typical mom B.S. When Melissa is later booted from the show and Joan comes out on top, it seems like Melissa was right all along. Joan’s calendar fills up with bookings and, while she knows the attention will likely be short-lived, she keeps at it anyway.

“I’m a performer…that is my life,” she says at the fadeout. For once, I don’t think my grandmother found Rivers’ frankness redeeming. “I never was a big fan of hers,” she decided as we left the theater.