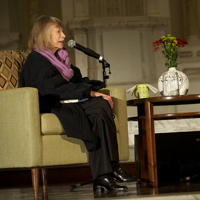 One surprise that came out of Joan Didion’s talk at downtown’s Vibiana earlier this month: She doesn’t like the word “memoir,” even though that’s what everyone has been calling her new book, Blue Nights.

“It’s soft,” she says, alluding to the memoir’s reputation (especially evident in Hollywood, where memoirs by aging celebrities arrive weekly) as mild-mannered, unrevealing, and self-promotional. Blue Nights is surely none of those things. It’s blunt, penetrating, and self-critical—Didion’s attempt to capture in words the tragedy of losing her adopted daughter, Quintana Roo, who died in 2005 at the age of 39. In her review of Blue Nights for Los Angeles magazine, Susan Salter Reynolds writes, “This is what they mean by blood on the page.”

Over the course of her conversation with David L. Ulin, a book critic at the Los Angeles Times, Didion spoke about the book, growing old, the writing process, and Los Angeles, a city many of us have come to associate with the writer even though she relocated to New York years ago. That’s because so much of her most celebrated writing—see collections like The White Album or Slouching Towards Bethlehem—came out of the 20-plus years she spent as a journalist in this city.

The event, part of the L.A. Public Library’s ALOUD series’ contribution to Pacific Standard Time, drew a sold-out crowd; ticketless hopefuls were turned away at the entrance. Didion and Ulin spoke for more than an hour, Ulin’s energetic enthusiasm tempered by Didion’s measured, straightforward style. At nearly 77, the petite author is fragile-looking but steely-eyed.

Didion explained that Blue Nights was originally supposed to be a more general study of parenthood and childrearing, but it turned inward after she began writing. It wasn’t an easy book to write, she said. The Year of Magical Thinking, her 2005 book about the death of her husband, took her 88 days to pen; Blue Nights took between six and eight months.

Part of the reason it was so difficult, Didion said, was the fact that “it has no narrative.” The book unfolds as a series of specific memories, inter-cut with characteristically lapidary, repetition-driven observations on the nature of parenting and aging, the twin themes of the book. More than once during the conversation, Didion turned to the thematic relationship between the two.

Didion will return to Los Angeles in April for an event at UCLA.