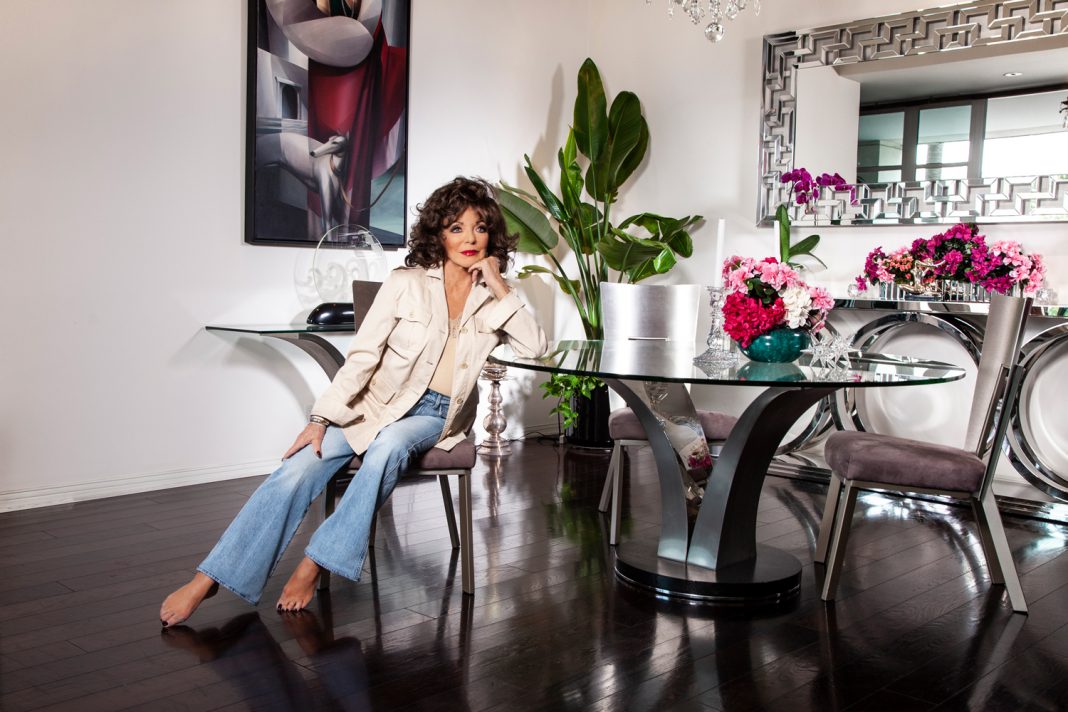 Whether you think of Joan Collins as aquatic cat-fighter Alexis Carrington on Dynasty or as the first film femme fatal to be murdered by a psychotic Santa in the 1972 horror classic Tales from the Crypt, the Hollywood icon reveals in a new interview that her life off-screen was more harrowing than anything on TV.

In a remarkably candid episode of The Originals podcast, Collins tells host Andrew Goldman that her first date with British actor Maxwell Reed ended in sexual assault. At 18, she already had a girlhood crush on a then-32-year-old Reed—and kept a scrapbook of his press clippings—but shortly after they were introduced at a London nightclub in 1951, she got a glimpse at who he really was.

“He came to pick me up in an amazing powder blue Buick, which was an American car, which you did not see around in those days,” Collins recalls. After telling her they were going to a country club, Maxwell instead drove her to his house in Hanover Square, where she says things immediately got weird.

“He said, ‘I’m going to take a shower,’ which I thought was very curious. And he said, ‘Take a look at this book. What do you want to drink?’ So I said, ‘I’ll have a rum and Coke,’ which is what I drank in those days. He gave me the rum and Coke, he gave me this book, which was full of the most explicit, sexually explicit, pictures that I’d ever seen. And the next thing I know, I was on the sofa in his sitting room and he had raped me, and I hadn’t known anything about it because he had drugged me.”

Collins says she felt ashamed and never told the authorities or her parents.

“They would probably say, ‘Well, why did you go up to his room? Why did you sit there when he said he was going to take a shower? Why did you look at this book with these dirty pictures?’ I didn’t even think about that. I wanted to wipe the whole thing off my mind,” Collins says, adding, “You didn’t go to the authorities then if you were raped. It would have been… I would have been on the front pages of all the newspapers, being this new, young actress, who was getting lots of publicity. My father would have gone berserk, absolutely berserk.”

Yet, Collins went on to marry Reed, explaining, that he apologized and “became very kind and loving and generous and a lot of fun. He was, I hate to say this, I mean, but he was fun. He was very amusing. And we had a group of friends who were very amusing, and being able to laugh with somebody has always been something that I find very appealing.”

They separated after just a year and a half, Collins says, but there was always one vile man or another trying to take her to bed, especially some Hollywood power brokers who dangled the part of a lifetime in front of her.

Collins claims that when Cleopatra was being cast, 20th Century Fox chairman Spyros Skouras and Fox studio head Darryl Zanuck both offered her the lead in return for sex—as did Fox production head Buddy Adler and Cleopatra producer Walter Wanger.

Skouras took the direct approach. “He basically put it in very plain terms: You sleep with me and…” The others, meanwhile, tried a softer sell, telling Collins, “You’ve got to be nice to us, we really want you to get this role, but there’s a lot of people in contention.”

Despite knowing what the role could do for her career, Collins says, “I wasn’t nice to them… I never, ever went on the casting couch. Never.”

Of course, not every man Collins met in those days was an old sleaze. Warren Beatty, to whom she was briefly engaged, still had pimples when they first crossed paths.

“He had told me he was 21, and he was trying to get a role in [Splendor in the Grass] the Elia Kazan film with Natalie Wood,” Collins remembers. “He was in Dobie Gillis on television, and he’d done some theater work. And it was when I saw his passport, not his passport, his driving license one day, that he had left out on the table, and I looked at it and I said, ‘You’re not 21. You’re 22. Why did you lie to me?’ He said, ‘Oh,’ and then he stumbled as he said, ‘Oh, well there’s just so much competition. There’s just so many actors today, so the younger you are, the better. So I thought that being younger would help.’”

Even though Beatty was still an unknown kid at the time, Collins saw that he had what it takes to make it in pictures.

“I sensed, yes, definitely, lots of ambition,” she says. “I introduced him to a lot of the people that he became very friendly with. Charlie Feldman, John Foreman, Stan Camin… I always felt that he did something that I had never been able to do. He was a brilliant, brilliant networker.”

RELATED: Fran Drescher Gets Real in the First Episode of Our New Podcast, ‘The Originals’

LAMag’s “The Originals”: Stevie Van Zandt on What Sex and Singing with Springsteen Have in Common