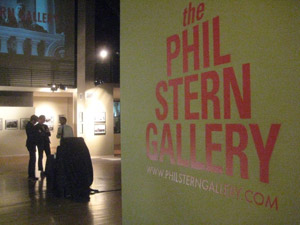 You may not know that city councilman Tom LaBonge is a pretty great photographer. His office is lined with images of Griffith Park and the landmarks of his district. I look forward to his photo calendar every January but didn’t expect that when he gave me one last night, he’d also pass along a ticket to the opening of a showstopper exhibit of work by Phil Stern.

Stern’s black and white images of James Dean and Marilyn Monroe are iconic. They’ve been reproduced thousands of times and you’ve surely seen them in art books and on billboards. We raced downtown to catch the opening night, hoping to meet the 92-year-old lensman (just missed him) at the opening of his new show “Celebrating JFK.” In case you didn’t hear (or see the Google doodle) yesterday was the 50th  anniversary of President Kennedy’s inauguration. Stern’s pal Francis Albert Sinatra was in charge of entertainment at the gala and invited the photographer to spend January 20, 1961 in freezing Washington, D.C. to capture the birth of Camelot.

The temporary home of the Phil Stern Gallery is the stunning penthouse of the Pacific Electric Buidling at 6th  and Main, downtown. The overscaled room is filled with Stern’s monochromatic images, some reproduced near life size. I love the print of the president in a top hat riding through Washington in a black convertible. There he is waving with Jackie and standing at the dais with Eisenhower and Nixon. The chronological arrangement makes you feel like you’re living that day over again with Stern. The show shifts to evening and you can imagine Mr. Sinatra at his peak and the party he got started. Nat King Cole on piano, Ella Fitzgerald at the mic. Legendary stuff. There’s also a mini museum about Stern himself, showcasing his Purple Heart, WWII credentials, and lots of salty notes passed among his immortal group of friends. The show is free and open through the weekend. Tuxedoes and top hats are optional.