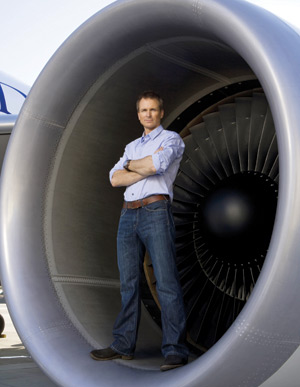 Well on my way to interview Phil Keoghan at LAX, I realize that I’ve forgotten my passport (I’ll need it to get through security). I go back home, pick it up, and retrace my route, only to be stymied by a traffic-stopping brushfire along the 105 freeway. By the time I run through the glass doors into terminal two, Keoghan has been waiting nearly an hour. “At this point,” he tells me, with a slight grin and one brow cocked, “you would have been eliminated from the race.” That would be The Amazing Race, which Keoghan has hosted since its debut on CBS in 2001. Part travelogue, part cultural immersion program, part character study, the reality show pits 11 teams of two—daughter and father, twins, separated spouses—in a dash around the world. The prize? One million dollars. Keoghan announces the players’ whereabouts and explains the tasks that must be completed before they can advance to the next leg. Called “Roadblocks” and “Detours,” these challenges might include milking a camel in Burkina Faso, say, or rappelling from a 590-foot mountain in Brazil. Where the exhausted contestants go, so goes Phil and his frosty blond tips.

Keoghan, who is 42, was born in New Zealand and travels to a second home there about ten times a year. This afternoon he has invited me to join him for a first-class lunch (alas, not a flight) aboard an Air New Zealand Boeing 777. A Kiwi entourage walks us through the terminal to the metal detector, where Keoghan has the routine down. He deposits his backpack, black boots, leather coat, and sporty wraparound sunglasses with yellow lenses in a bin. Keoghan, who lives in Santa Monica, racks up 100,000 miles a year flying for the race, up to another 160,000 traveling to and from New Zealand, and still another 100,000 or so more jetting to motivational seminars he conducts and taking pleasure trips with his wife and 13-year-old daughter. Then there were the 3,500 miles he biked across America last spring to promote the show and raise awareness for multiple sclerosis. He may be the best-traveled host in the history of television.

As we reach a door that leads to a mini control room, Keoghan remembers his first-ever flight, when he was three. “It was in 1970 on an Air New Zealand plane,” he says. “It was a 737-100, from Christchurch to Auckland.” His scientist father moved the family to Antigua when Keoghan was six to work on a research project. “We traveled into South America, Cuba, Jamaica,” he says. “That’s where my love of travel began. I became fairly fascinated with jets and planes. You can look at the skin of a plane to see how many repairs have been made on a fuselage.”

A van carries us out onto the tarmac, where big, loud, scary-when-this-close jets take off and land just to our right. An aviation nerd, Keoghan points out the window like a boy: “That’s an Airbus 340 with four engines, they fly a lot of those in Asia. It’s a comfortable plane…. Look at that 737! It’s probably a 700 or 800 with little wingtips like that. It’s a great plane, a real workhorse…. We used to have those turboprop Avros in the Caribbean.” The van turns behind a huge hangar, and soon enough Keoghan is smitten. “Here’s your plane, ma’am,” he says, beaming at the 777. “Is that sweet or what?”

She is beautiful—majestic, even—with twin engines and 313 seats. We climb stairs into the hushed plane. “It’s like it’s haunted,” Keoghan says, before offering me seat 4J in the posh premier business section. “These are my favorite seats in the sky,” he tells me, settling his six-foot frame across from me in seat 4K. “The good news is, unless there’s an earthquake, there will be no turbulence on the flight.”

In the six years since the Emmys have grown to include an award for Outstanding Reality-Competition Program, the category has seemed more like a coronation: Race has won every time. The 15th season premieres on September 27, one week after this year’s awards (Race is nominated again) are handed out. “The show is totally unpredictable,” says Keoghan, who is digging into our first course: salad with a tart avocado oil-pomegranate dressing. “We’re dealing with traffic jams, political unrest, food issues.”

When a duo is the last to arrive at a “Pit Stop” (the end of a leg), it is Keoghan who delivers the bad news: “I’m sorry to say…” He asks them what they learned about the world—and each other—on the trip. The beauty queen admits she never understood poverty until she saw India, the Kentucky coal miner who doesn’t have much is suddenly thankful for what he’s got, the deaf son appreciates for the first time his mother learning sign language. After such an intense experience, some couples fall more deeply in love; others realize they can’t stand each other. “These people go on remarkable journeys that profoundly change them,” says Keoghan, wiping his upper lip with a napkin. “I’m touched by the genuine goodness of people, no matter where we travel.”

“Cheers!” he says, popping open a can of L&P, a carbonated lemon soft drink whose label reads “World Famous in New Zealand.” A crew member asks what we’d like for our second course—chicken, salmon, or beef? Keoghan, tan and ultrafit, dressed in Hugo Boss jeans and a fashionable button-down shirt, chooses the salmon. He tells me how, when he was a teenager, his parents sent him back from the Caribbean to Christchurch to attend school, where he played rugby and tried to stay out of trouble. At 19 he became a host on a children’s show called Spot On; it was also the year he almost died in a scuba-diving accident, an experience that Keoghan says inspired him to leave “no opportunity wasted”—his mantra and the name of his 2004 self-help book. “The word can’t is not in my vocabulary,” he says. “I won’t allow my daughter to say it.” He moved to the United States in 1992 and hosted myriad adventure shows—it came down to him and Jeff Probst sitting together outside Les Moonves’s office for the Survivor job—before he landed Race.

Survivor may be the better-known show, but Race was a better fit for Keoghan’s wanderlust. The contestants are not limited to one exotic location but are exposed to a world wildly outside their borders. In 28 days they may hurtle across China, Mongolia, Vietnam, India, Kuwait, Mauritius, Madagascar, Finland, Ukraine, Morocco, Spain, and France. They face their fears, make missteps, and contend with uncomprehending ticket clerks, obstinate donkeys, and nincompoop taxi drivers who can instantly turn a front-runner into toast.

To avoid getting sick on Race (“I can lose ten pounds during a shoot”), Keoghan layers his suitcase with energy bars and vitamins, drinks a ton of water, and does 100 push-ups daily. Other than a “wicked stomach bug” in Africa that waylaid the crew in season one, he’s never come down with anything. Still, the host can’t resist concluding our third course—a cheese plate with red grapes and cantaloupe—without issuing a challenge. “That’s a very sharp New Zealand cheddar,” says Keoghan, pointing to a square block on my plate. “If you don’t like it,” he says, brow cocked again, “I’m never taking you to New Zealand.”

I like it. If the cheese is a roadblock, I’m making it to the next leg.