Home Uncategorized Jesus, Mary, and Jerry Garcia: The Black Velvet Painting Gets Its Due... 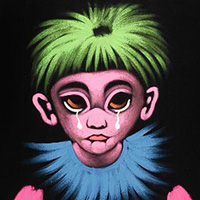 A few years ago Caren Anderson and Carl Baldwin decided to leave Portland, Oregon and return to Southern California. “We missed the sun,” says Baldwin.  There was one problem: The couple needed to find a suitable space for their collection of 3,000 velvet paintings, which had previously been on display at Velveteria, the museum they founded in Portland in 2005. It took five trucks to move the collection south, but in December of last year Velveteria reopened on New High Street in Chinatown, quickly becoming L.A.’s hotspot for the underrated art form.

“To most people who collect these, it’s a dirty little secret,” says Baldwin. Velvet paintings are often seen as a novelty, but to Anderson and Baldwin they are art. “As a medium it’s just very compelling to look at,” Baldwin explains. “When the light hits the painting, there’s a luminescence there that you don’t see with any other type of material. It makes the motifs pop. We have one of Hank Williams III smoking a cigarette and it looks like you can grab that cigarette right out of his hand. That’s how real they look.”

The couple’s fascination with velvet paintings began half a century ago. “We both grew up in Los Angeles. In the ’60s and ’70s, people sold velvet paintings on street corners, gas stations or swap meets, anywhere you could set up shop,” Baldwin says. They didn’t start collecting velvet paintings until 1999, when the couple was driving through Bisbee, Arizona and stopped at an antique shop. In a corner of the store they found a velvet painting of an African-American woman with a blue Afro. It was love at first sight, and the painting remains a centerpiece in Anderson and Baldwin’s collection.

“Once we opened up the museum in Portland, people started coming out of the woodwork,” Baldwin explains. He was once approached by a woman who was looking for a home for a collection of about two hundred velvet paintings from Hawaii and Tahiti owned by an 88-year-old friend of hers. “He lived in a Dodge Conversion van out in an old eucalyptus field in the desert,” Baldwin says. “The only thing he had to his name was those paintings. I asked him how he had ended up like this and he said, ‘It was the women. They took it all!’ Then he paused before saying, ‘But it was worth it all.’”

Anderson and Baldwin have found velvet paintings in the strangest places. These days they have suppliers in Mexico and they can even help people find artists for commissioned pieces. “If someone wants a velvet painting of their wife or the Dodgers or something, we can get that done,” Baldwin says.

The two hundred velvet paintings from the desert remain the pride of their collection. ”One of them is a beautiful painting of a Tiki woman pouring water, by an artist named Edgar Leetag who went over to Tahiti during the depression,” Baldwin explains. “That one is going to France in June for an exhibition in a museum right next to the Eiffel tower called Musee Du Quai Branly.”

Currently the museum has a 1960s themed exhibition on display. “We have the Beatles, The Rolling Stones, Frank Zappa, Jerry Garcia, JFK, Black Power, and the Vietnam War and, of course, our Jesus and Mary section,” Baldwin says. In the back of the museum Anderson and Baldwin installed a Hall of Elvis as well as a black light room with about forty black light paintings. Baldwin promises a psychedelic experience: “Anything you can think of in life has been painted on velvet at some point.”