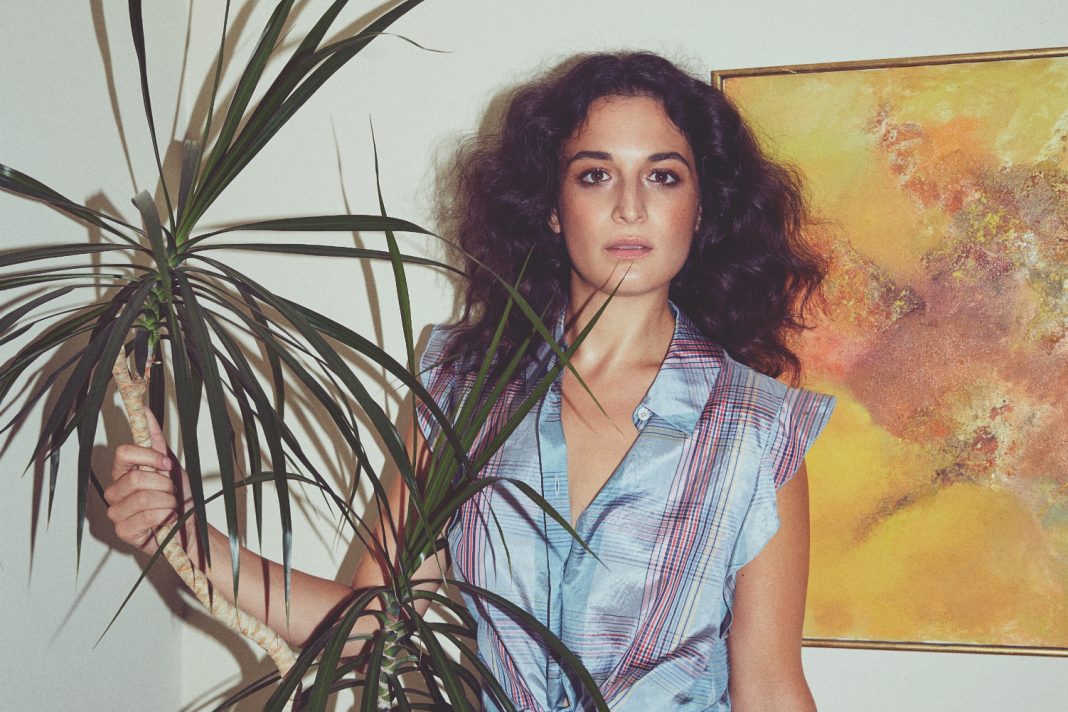 Ten minutes after Jenny Slate arrives at a Silver Lake coffee shop on a sunny September afternoon, she is accosted by another patron. Thankfully the accoster is her pal and fellow Bob’s Burgers actress Kristen Schaal, which makes Slate a very willing accostee. The pair hatch a plan to have dinner as soon as Slate is in town long enough to do such a thing, which, she estimates, will be in two months. “This is the trouble with being friends with Jenny Slate,” Schaal says to me with a laugh. “She’s a movie star. You can quote me on that.”

Indeed, Slate’s rise is indisputable: In the years since her web series Marcel the Shell went viral (she voices the titular curious gastropod), the 36-year-old has lent her talents to animated films like Zootopia, starred in beloved series like Parks and Recreation, and carried provocative indies like Obvious Child. (At the moment, you can catch her alongside Tom Hardy in the comic book tentpole Venom.)

In short, she’s one of the industry’s most interesting and chameleonic talents. “When you come from comedy, people think that’s what you are,” she says. “You almost feel fraudulent if you have darker, more velvety aspects of yourself. So I want to take roles that are dramatic or sad—the way I feel about it is, I’m just starting.” Here she talks everything from edibles to Eric Garcetti.

Most L.A. sentence Marcel the Shell could ever say?
[Marcel voice] “I’ll have the bone broth.” That, or like, “I don’t like the Beverly Center.”

You like rabbits, I hear?
I mean, they’re fine. Rabbits are fine.

Oh weird, I read this interview where you said they’re your favorite animal.
Rabbits? Really? I don’t think I would say that rabbits are my favorite. I love giraffes. But I have a lot of wooden rabbits in my house.

Well I’m going to ask you this question anyway, even though now it makes way less sense: Any rabbit, animated or otherwise, you’d have open for you at the Largo?
Harvey from Harvey—you know, the Jimmy Stewart movie? Freak ’em out, man. Harvey could get it done. But if not Harvey, isn’t there a big bunny in Donnie Darko? That guy could do it. And if not him, what about Bigwig from Watership Down? Make it crazy. Thumper from Bambi’s too dumb. Can you imagine me getting up on stage and being like, “Give it up for Thumper!”

And you couldn’t have Bugs.
Bugs can’t. You can’t do that. You can’t follow Bugs. And Roger Rabbit is too much.

I love that movie though.
It’s one of my favorites. Although I never really understood why Jessica—I mean, I love that they love each other. But I was always annoyed by him. He’s really irresponsible. I hate it when people are irresponsible. What are they doing together, Patty Cakes? Man, I bet there’s a lot of gross stuff you could look up on the internet.

When I was a kid, I used to tell my mom that I wanted Jessica Rabbit’s dress to be my wedding dress.
I see nothing wrong with that. A few years ago, Jessica Biel went on Weekend Update dressed as Jessica Rabbit, and first of all, I was like, Yes. Accurate. So sexual and gorgeous. But then I was like, this dress can work in real life. Then again, I guess you have to be Jessica Biel. Truly, so hot.

You’re working on a book. Angeleno you’d ask to write the foreword?
Miranda July. She’s the smartest, most beautiful mind in the world. But what if I was like, “Eric Garcetti.” By the way, I don’t know much about Eric Garcetti, but I will say that I think his voice is very sexy. I am truly turned on by Eric Garcetti’s gorgeous voice. He has the Justin Trudeau of voices.

He’s the voice of LAX!
I know! Every time he’s like, “Hi, I’m…” I’m like, “HI I AM TOO.” It’s funny, Jerry Brown’s voice is like rocks being jangled around in a bag. I’m super happy about how much he cares about our environment, but his voice is super gravelly.

Eric Garcetti should voice your audiobook.
Oh, my God, can you imagine?

It also seems like you smoked a lot of weed in college.
It’s something that continues to occur.

If you made a dream edible, what would it be?
The thing about edibles is, I always do them wrong. I always eat too much. I forget it’s not a normal candy, and then I freak out. So if I were to make one, it might be cool to make a very gentle weed soda. Those Bliss vapes are also very nice.

Some of those were mailed to my office, and I have never seen my coworkers fight over something more.
They’re really nice. The one thing that I forget is that you can’t use them in an airport. I did it once. It was an innocent mistake. I smoked it in the bathroom stall, and I slowly blew the vape into my shirt, and I was like, “I’m gunna be arrested.” But I wasn’t. I lived to tell the tale.

Character from your career that you’d want to be stuck on the 405 with?
I’ve had the pleasure to play a lot of people who are really annoying. Like, you don’t want to be stuck in traffic with Mona Lisa. She’s literally the worst. So probably Marcel the Shell. He’d have so many observations. What people like to drive, their faces. What we’re listening to. I like the way that he observes. It’s very soothing. Sometimes when I don’t feel good about myself, I observe things the way Marcel does to remind myself that that aspect is actually within me. He reminds you to watch and listen.

You’ve voiced a lot of animal characters in your career. Non-publicist-approved name for your pet hotel?
Pussy House. It’s a cat hotel. But I don’t want to go. I don’t like cats.

I read that you were on the speech team in high school. Is that something that requires you to present a closing argument?
No, speech team was taking a play, whittling it down to ten minutes, and doing all the characters. And I was incredibly competitive. I was state champion four years in a row, New England champion three years in a row, ranked eighth nationally, and I went to nationals three times—no, I went to nationals two times. The third time I refused to go because I wanted to go to grad parties instead, because I finally felt OK about myself, and I knew that I could make out with people. I only did speech team to get into college because I wasn’t good at sports. I liked it, but I also knew it was my ticket out.

How many people have said that sentence: “Speech team was my ticket out”?
It was my ticket out, though! But I liked the thrill of the competition. It’s turbo-dorky and really fun, and I did love it, and I was completely dedicated to it. I wore a full Talbot’s suit. I looked like I was going to divorce mediation, or synagogue in 1993.

Ok, so: Movie set in Los Angeles you’d perform in a speech competition?
Oh my God. What a good question. Who Framed Roger Rabbit, of course. I would be most excited to be Jessica. I’d also love to be what’s his name, with the Dip? Christopher Lloyd. Would be really pumped to be him. Another movie I’d like to do in that respect would be Babe. “That’ll do, pig” is what I say to myself after I put on my makeup and I’m ready to go out. Not really. But that’d be so great.

Pick a hype man: Nick Kroll or Nick Offerman.
Pfff. If you pick Offerman, you’re gunna get one type of show. If you pick Kroll, you’re gunna get another. I guess you have to know your audience. Let’s say I was performing at an outdoor festival filled with people who like to work with wood. Then I would pick Mr. Offerman. Let’s say I was performing at a synagogue filled with people who are going to synagogue. Then I would choose Kroll. This feels bad and hard to choose. Can’t they do it together? Can’t we give these white men a chance? Aren’t they being marginalized?! [Laughs.] I would choose both. If you’re going to have me minimize them in an offensive way, which I won’t, I choose both.

RELATED: Kevin Smith Almost Died, Became a Vegan, and Still Podcasts Every Week for You