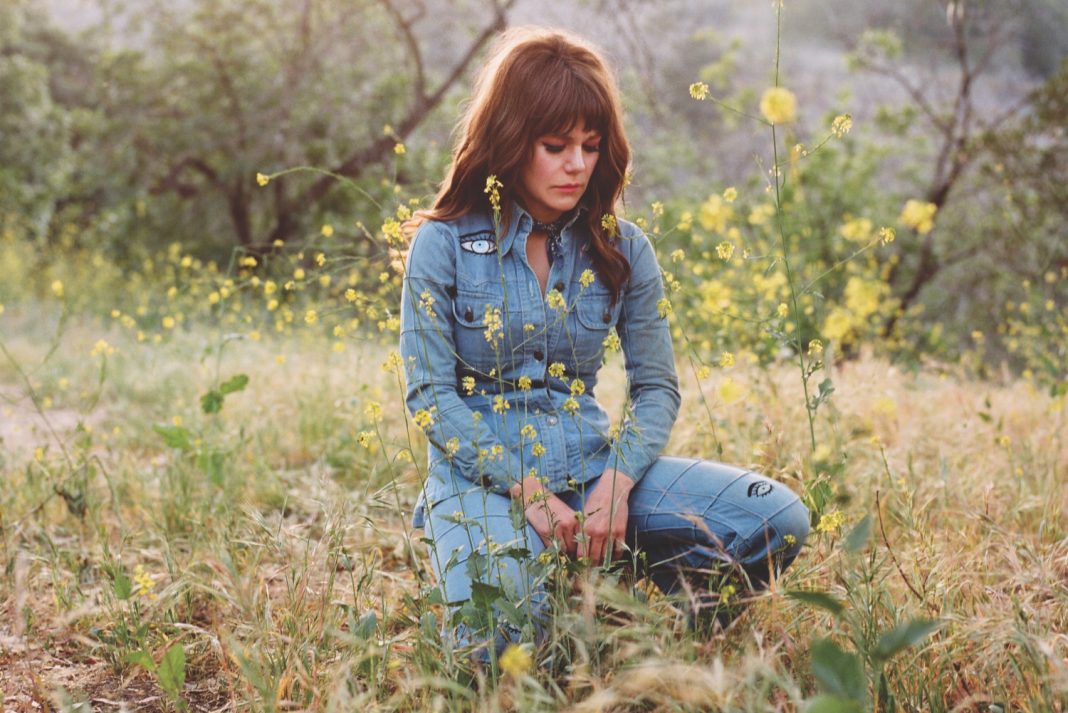 Jenny Lewis has been buying old paparazzi pictures of herself on eBay. In one, she and a teenage Sara Gilbert are being held aloft by Malibu from American Gladiators. In another, she’s wrapped in Donnie Wahlberg’s embrace. It goes on, a parade of ’80s faces sharing the frame with the redheaded child actress at parties and events. Lewis has snagged hundreds anonymously for a couple of bucks a pop. But they seem like snapshots of someone else’s story.

“The older I get, the more I embrace the fact that my life’s had a really strange arc,” says Lewis, 43, who is far better known as the frontwoman of indie rock band Rilo Kiley than, say, Fred Savage’s costar in a certain Nintendo-bankrolled 1989 film (that’d be The Wizard).

Lewis has stressed that she never looks back, but a lot’s changed for her in the last three years. After spending most of that time away from L.A.—the only home she’s known—running from pain or confronting it head-on, she’s back with the sort of LP you’d expect from someone who’s already lived a few lives. Out March 22, On the Line is a sure-footed, Americana-tinged set led by a narrator who sounds world-weary and wiser for it. Meanwhile, with due respect to living legends, her bandmates look the part. Aside from three songs produced by Beck, the album was recorded live at Capitol Studios with Lewis on piano, the Heartbreakers’ Benmont Tench on keys, Stones producer Don Was on bass, and session drummer Jim Keltner (Traveling Wilburys and many more). Oh, and Ringo Starr sits in for a couple of songs.

Lewis compares the process of assembling the band with producer-guitarist Ryan Adams to drafting fantasy football picks, except “they’ve all played with Bob Dylan,” she laughs. “I was so nervous leading a band of that caliber. My mouth was dry and my hands were trembling, and I feel like you can hear it on the record—it’s not perfect, but it’s real. I’m just singing it down.”

But On the Line truly owes its rawness to a series of events that began in 2016, first with the dissolution of Lewis’s 12-year romance and creative partnership with musician Johnathan Rice. The breakup was enough to propel her to New York, where she recuperated in the East Village apartment of St. Vincent’s Annie Clark.

“I’m a Valley girl at heart,” says Lewis, who was raised in Van Nuys and owns a Laurel Canyon-adjacent home dubbed “Mint Chip” (for its color scheme). “But every corner has a memory, every strip mall has a story, and every goddamned washcloth in my cupboard reminded me of Johnathan. I needed to get out for a bit.”

Within weeks of arriving in New York, Lewis started a super trio called Nice as Fuck with friends Tennessee Thomas (the Like) and Erika Forster (Au Revoir Simone). Loose, loud, and a little political, they often played in a Manhattan storefront window—and later at a Bernie Sanders rally. Lewis says founding the all-female band realigned her inner monologue after “sharing a consciousness” with Rice for so long.

While away from L.A., she also plotted an anniversary tour and reissue for her 2006 solo debut, Rabbit Fur Coat, an album that was largely inspired by her fraught relationship with her mom. Then, in the latter half of 2017—the middle of Lewis’s sabbatical—she was opening for Biz Markie at a Hamptons wedding, of all places, when she received a call: Her mother had only weeks to live.

“My mom was an addict, and we’d been estranged for maybe 20 years,” says Lewis, taking a breath. “I guess that’s the one benefit of cancer: You get a moment to go up close. I feel like that was her gift to me, hanging on long enough to have those talks.”

“The older I get, the more I embrace the fact that my life’s had a really strange arc.”

On the Line’s “Little White Dove” paints a psychedelic but bracingly honest picture of Lewis at her mother’s deathbed, while the gospel-tinged “Dogwood” is about a doomed attempt to salvage her and Rice’s love. The album confronts people who’ve hurt Lewis, but its songs are neither petty nor blithe. They’d seem documentarian if they weren’t so affecting—unpacking moments of trauma, ecstasy, ennui, and escape so they can be seen as a whole, not unlike photographs.

Before Lewis finally returned to Mint Chip last year, she bounced around the city for a while, renting spots on Airbnb or crashing with friends like Anne Hathaway. She’d go on walks and work on lyrics. When she thinks about that time now, it’s an old Rilo line that comes to mind: “When the palm trees bow their heads/No matter how cruel I’ve been/L.A., you always let me back in.” And so we have.