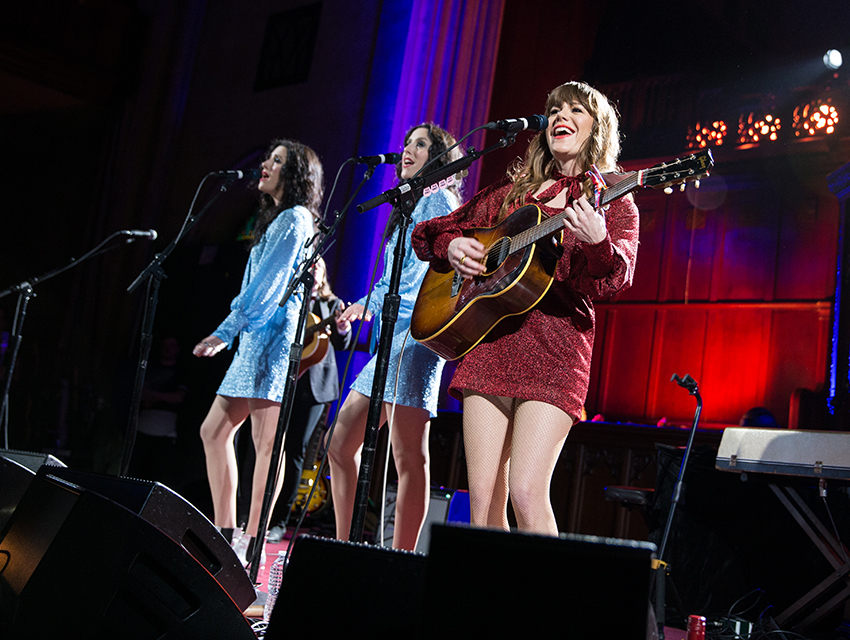 If it weren’t for fear of being struck by lightning (or a rogue meteorite), we’d call her Saint Lewis.

Last weekend, Jenny Lewis celebrated the ten-year anniversary of her debut solo album, Rabbit Fur Coat, with three stunning nights in the cathedral sanctuary at Immanuel Presbyterian alongside the Watson Twins. Lewis also recently announced her new wine, which marks the occasion by sharing the name of Rabbit Fur Coat’s opening track, “Run Devil Run.” Like her Voyager wine that preceded it, Run Devil Run is a natural wine made in collaboration with Domaine LA and La Clarine Farms, and it’s on shelves at Domaine LA and available online now.

Lewis managed to make her performances at Immanuel Pres both grand and personal, the church helping with the former by lending some of its grandeur. More than anything, from the moment Playbills were handed out at the door, the evening felt like an event. The show was set up like a play in two acts: The first act was Rabbit Fur Coat in full, a beautifully restrained, aptly reverent affair that showcased the album’s storytelling and gently soaring vocals. Entering through the back door of the darkened sanctuary, Lewis and Chandra and Leigh Watson glided down the center aisle while singing the album’s a cappella opener, “Run Devil Run,” amplified only by the room’s natural acoustics and lit only by religious candles bearing the song’s name in English and Spanish  (“Corre Diablo Corre”). The attention to detail—a short harmonica solo or triangle flourish; the choreography between Lewis and the Watson Twins; their outfits recalling the album cover—immediately charmed the audience, who reciprocated that respect for the evening.

“It’s weird. We’ve played those songs over the years, but never in order like that, so it really does feel like a play,” Lewis said from stage, thanking the “city of so many angels” for its enduring support.

As Lewis and the Watson Twins exited the stage, gliding back up the center aisle while singing an a cappella reprise of “Happy,” a few people started singing along. For a split second it felt inappropriate, like they’d just crashed a choreographed moment. But, as if heartened by the spirituality of the surroundings, the entire crowd began to join the refrain, a powerful moment that lasted until the door shut behind the Watson Twins.

After an intermission, Lewis and the band were back for Act Two in their more boisterous form, dancing, telling stories to the crowd and playing tracks from throughout Lewis’ career, both on her own and as a member of Rilo Kiley.

“I’m a little nervous,” Lewis said. “Well, as nervous as you can be in church, especially if you’re a Jew. Speaking of churches, this song is about a drug dealer. No, it’s not, actually! Surprise, surprise. It’s actually about something completely different. You’ll know when we start.”

They launched into “Just One of the Guys,” Lewis’ witty and incisive commentary on lopsided views of aging between men and women, but the drug dealer in question appeared shortly after in “See Fernando,” a track that got Lewis—who was now wearing one of two intricately designed suits she’d don that evening, this one with her favorite medicinal stitched on the back—into the crowd, which fed off the up-tempo energy.

Lewis’ shows always feel like a jam with friends, so it’s especially gratifying when her friends actually do join her. M. Ward, who also opened the show, added his guitar stylings throughout and reprised his original vocals on Rabbit Fur Coat, while Ryan Adams jumped on stage for “She’s Not Me,” rounding out a team of several collaborators instrumental to Lewis’ last ten years. It felt like an appreciative move on Lewis’ part, a toast to those who helped get her to that moment. And if you can toast your friends with your own wine, they’re probably happy to stick around for ten more.

M. Ward’s Newest Album Is an Ode to the Soggy Pacific Northwest