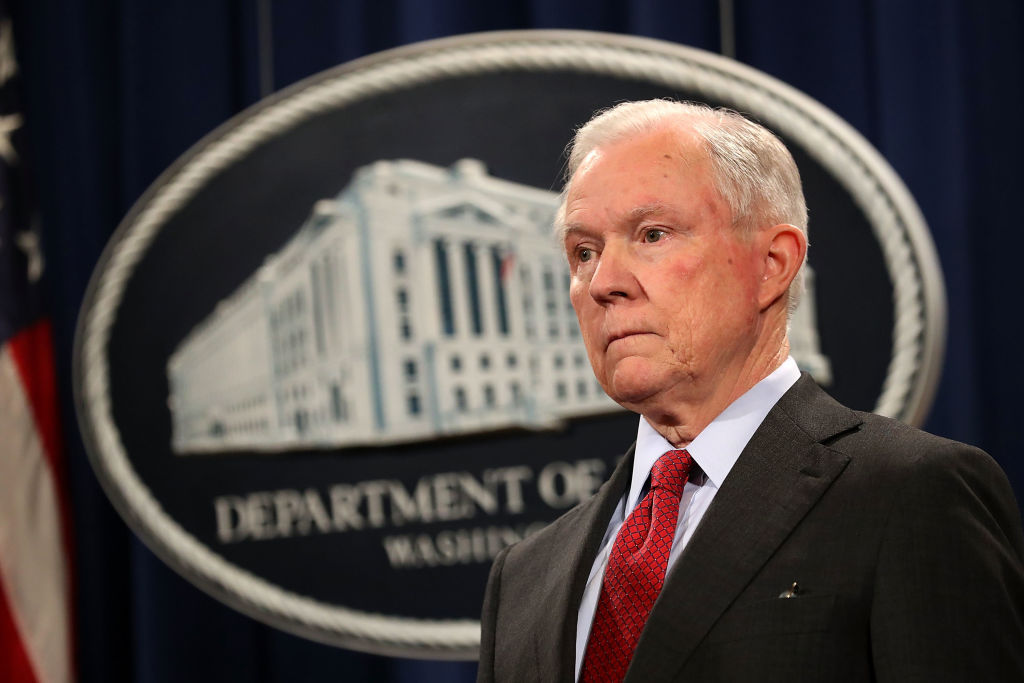 On January 1, recreational cannabis became legal in California. According to a detailed Washington Post story, roughly 100 shops across the state opened their doors without incident, sold weed to normal-seeming adult people who wanted to buy some, and that was basically that.

Earlier today, avowed marijuana opponent Attorney General Jeff Sessions—who is reported to have said he was OK with the KKK until he discovered they smoke pot—announced he was reversing an Obama-era policy that basically stopped federal authorities from preventing the sale of marijuana in states where voters had approved its sale.

The move wasn’t a complete surprise. Even as we published a guide to California’s new recreational marijuana rules, uncertainty lingered about what would happen at the federal level with Sessions at the helm. Jessica Ogilvie wrote…

“As for whether the Department of Justice will crack down on the state (U.S. Attorney General Jeff Sessions is staunchly in line with the federal government’s classification of marijuana as an illegal Schedule I drug, alongside heroin, peyote, and ecstasy), no one knows, says the California Bureau of Cannabis Control’s [Alex] Traverso. ‘We haven’t seen any sort of concrete plan from the federal government about how they want to handle cannabis regulations,’ he adds. ‘Until they come forward with something specific, we’ve had to block out that noise and focus on getting our work done.'”

In a short amount of time, Sessions’ decision to rescind the so-called Cole Memo has proven unpopular among both conservatives, who are historically in favor of states’ rights, and progressives, who consider legalization of weed a step toward ending the war on drugs once and for all.

At the moment, it’s unclear where Sessions’ announcement leaves an industry that was expected to produce $1 billion in annual tax revenue in California alone “within several years,” according to the Associated Press.

MedMen, Southern California’s largest marijuana retailer, is currently selling recreational marijuana for adult use at two locations—one in WeHo and and one in Santa Ana—with three more in the works, in Venice, DTLA, and near LAX. The dispensary recently launched a massive print and outdoor ad campaign that features a diverse array of faces along with the assurance that “it” (as in weed) is legal. In an email to Los Angeles magazine, VP of corporate communications Daniel Yi expressed confidence that Sessions’ memo would only serve to further the public’s enthusiasm for legalization:

“The developments today from the US Attorney’s office don’t change the reality on the ground. Mr. Sessions has not said his office will crack down on state sanctioned cannabis businesses, he said he will leave discretion to the district level US attorneys. This creates more uncertainty, but what is certain is that the vast majority of Americans support marijuana legalization, the largest numbers ever in history. The state legal cannabis industry is adding hundreds of millions of dollars to public coffers and employing hundreds of thousands of people. We believe today’s development will further galvanize the industry and its supporters at state legislatures and in Washington as it has already begun happening in reaction to Mr. Session’s new memo.”

For their part, California elected officials were quick to voice their displeasure on social media.

Instead of going after drug cartels, and violent crime, and major traffickers, Attorney General Jeff Sessions is going after recreational marijuana users. That’s not being smart on crime.https://t.co/BNlcxbTT4v

Ted Lieu ripped Sessions for attempting to take America back to the Prohibition era.

AG Jeff Sessions apparently wants to take America back to the 1920s. Prohibition didn’t work then and it will not work now. Congress needs to pass sensible laws to prevent a monumental waste of precious federal resources chasing Americans who use #cannabis. #thursdaythoughts https://t.co/GP3qPyKIve

My full statement on Attorney General Jeff Sessions’ harmful and destructive attempt to revive the failed war on drugs.

Calling on our federal leaders to move quickly to protect states’ rights from the harmful effects of this ideological temper tantrum by Sessions. pic.twitter.com/96xtRx6OYE

Reps from several legalization-adjacent organizations, including the California Cannabis Industry Association and the City of Los Angeles Department of Cannabis Regulation, did not return requests for comment.