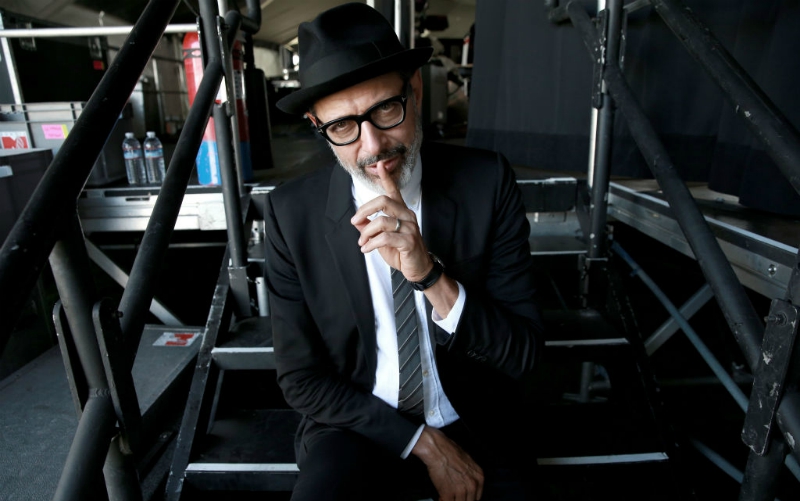 You haven’t truly heard your name until you’ve heard Jeff Goldblum say it.

The 65-year-old actor loves savoring—and sometimes butchering—names when he works the room at Rockwell Table & Stage in Los Feliz. Goldblum’s signature, oft-imitated speaking style has a bebop quality: a swingin’ rhythm and distinct musicality, punctuated with those jazzy “uh”s and “um”s.

The crowd of around 150 may have turned up for the novelty of hearing the cult character actor, famous for roles in The Fly, Jurassic Park, and Independence Day, play jazz. That he did, tickling the ivories with his Mildred Snitzer Orchestra—named after a lady he knew growing up in Pittsburgh—as he does semi-regularly on Wednesday nights at 9 p.m. He was back this week from a hiatus after doing a “publicity marathon” for Thor: Ragnarok, Jurassic World: Fallen Kingdom, and Isle of Dogs.

But the real draw for most people—and maybe for Goldblum himself—is the chance for ordinary folks to have an intimate, loose hang sesh with a very charming, very self-aware Hollywood icon.

“This is my real reason for doing this,” he says as he wades into the sea of tables, mingling. “I don’t get a chance to get out of the house.”

Decked out in a black suit with a smart fedora and black-and-white loafers, Goldblum and his band play less than ten numbers—crowd-pleasing standards like “The ‘In’ Crowd,” “Nostalgia in Times Square,” and “Doxy.”

As a pianist, he’s an unshowy showboat, providing sunny accompaniment and taking the occasional solo that usually ends in a high glissando. He bops and smiles while he plays with a kidlike energy, sometimes turning his head away from his hands for a while with a giant Cheshire grin as he surveys faces in the crowd. Mostly he cedes the musical spotlight to his more virtuosic bandmates: John Storie on guitar, Trevor Ware on bass, James King on sax, and Kenny Elliott on drums. Leah Zeger joins in for two songs with her violin and sultry voice.

But jazz plays second fiddle to the Goldblum Factor, and he serves it in heaping spoonfuls. For 45 minutes before the downbeat, he mills around the room with a mic, asking people where they’re from, relaying news of upcoming weddings and babies, making people laugh and feel dizzily touched by fame. He does a dramatic reading of a text exchange on one man’s phone, and signs another man’s leg next to a Jurassic Park tattoo.

He plays a game where, with the audience’s help, he connects one film or actor to another through a human-IMDb wormhole. He plays “Would You Rather?,” asking the crowd to register their vote with applause on the bangability of Paul Newman versus Robert Redford. Between songs, the show’s director, John Mastro, hands Goldblum pieces of paper with more crowd games, and the actor plays his greatest improvisatory instruments—his speaking voice and his wit—as he queries the audience on things like what hypothetical statements would constitute dating deal-breakers, and ways to “pornify” famous movie titles.

A ten-minute “break” during the two-hour show—designed to let people snap photos with Goldblum—turns into 30 minutes as nearly everyone in the room throngs him near the stage (he even lets a woman put on his glasses). But he’s the one who initiates and relishes the selfie onslaught.

Goldblum clearly thrives on the attention, doing a Topol shimmy when his band spontaneously plays “If I Were a Rich Man” and a spirited Irish jig when they strike up “(I’ve Got A) Golden Ticket.” This despite the fact that it’s late, and Goldblum—a father of two boys under the age of three—has been up since 5 a.m. He says Wednesdays are now his one late night out. On Tuesday night, he was in bed by 9.

“I’m kind of a disciplined fella…galoot,” he tells me between bites of salmon before the show, describing his new morning routine. “I played my piano first, and then I worked out in our gym in the house a little bit, and then had some nourishment—revivified my tissues—and fortified myself for the waking up of [sons] Charlie and River. We got them up at 6.”

Tonight’s show is a special one, not just because it’s Goldblum’s first time back in a while. In the audience is Grammy-winning record producer Larry Klein, who will produce (with Mastro) a live album for Decca Records at the Capitol Records Building next month. (A handful of lucky audience members will get to attend, thanks to a raffle Goldblum does between songs.)

Also in attendance are writers from the Comedy Bang Bang podcast crew, including Nick Wiger and Jessica McKenna. They’re doing reconnaissance for a planned TV pilot, also tied to the Capitol sessions, based on Goldblum’s cabaret act.

“We don’t know what it’s going to be yet,” the actor says. “But I think it’s kind of like this. It’s not a comedy about the band or anything like that. It’s a variety show where I probably adhere to the same thing we will do on the two nights at Capitol—which is, uh, me being surprised. Me having no idea what we’re going to do, and having guests about whom I have no prior knowledge. Because I’m non-careerist, it’s just fun. I conscientiously try to play piano every day, but besides that, the other part is a result, such as it is, of my improvisatory, you know, resources—such as they are.”

As he talks, he tilts his dinner plate slightly and a pool of salmony liquid perches precariously near the edge. When I point this out, Goldblum says: “You’ve just saved my life. Thank you very much.”

At least at Rockwell, Jeff Goldblum is exactly who you hoped he would be. A hammy hepcat, a cool dad, a warm and twitchy conversationalist. When he asks if you have kids, or what your wife does for a living, or if you like football—he seems genuinely interested in the answer. And when he says your name back to you, it’s like hearing it for the first time.

Goldblum’s next show at the Rockwell Table & Stage takes place on Wed., April 11 at 9 p.m. Sadly, it’s sold out.