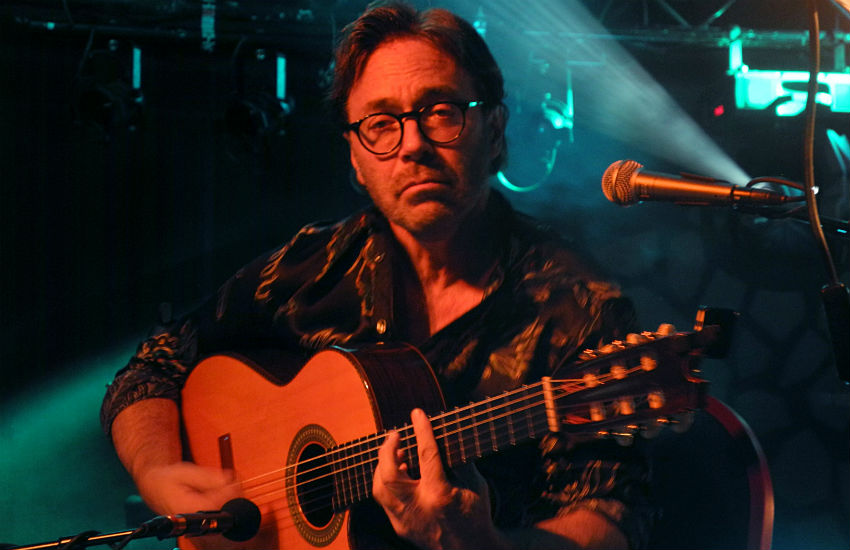 Every musician’s fantasy, at one point or another is to play with their favorite band. For Al Di Meola, it actually happened. By age 19, he was playing guitar in his favorite jazz band, Chick Corea and Return to Forever. Since living his teenage dream, Di Meola has become a Grammy-winner and perennial poll-winner. He’s one of Guitar Player’s most-decorated musicians and he has been inducted into the International Guitar Hall of Fame. After clearing airport security on the way to his San Diego gig, Di Meola spoke with us about his early days in music, his evolution over the course of 28 solo albums, and how he found his way back to the electric guitar after developing crippling tinnitus.

How did you get your start in music?
Chick Corea and Return to Forever just happened to be playing in Boston while I was attending school. I remember going to the show and speaking to a friend of mine after the show by phone who happened to be a recording engineer. He had a tape of me playing with a different band and he took it upon himself to seek Chick out, find out where he lived, and somehow get him that tape in the wild hope—the extreme hope—of having him like it enough to have me join the band. The timing was perfect, because he was actually, the week after that, looking for a new guitar player. That started my career, which resulted in my first show being played at Carnegie Hall: a sold out show with Return to Forever and it’s been nonstop since then. In two years with that band we produced three records. Then I went on to do some 28 solo records since then.

Your sound has really evolved since your first album, Land of the Midnight Sun, to now. How would you describe your style?
I was brought up loving the popular music of the day—anything from The Ventures to The Beach Boys and The Beatles—as a young boy. Luckily, my teacher, who was more versed in old school jazz, was kind of teaching me both worlds. He satisfied my yearning for the rock and the pop stuff, but at the same time I was learning all the theory behind jazz. I was able to read music at an early age and it just made it easier to transition into college and play the difficult charts that were presented to me from playing with Chick in Return to Forever.

My writing developed as a result of the influence of all that. Most of my writing is the result of a lot of charts being written for each player. So the music is really a combination of jazz and rock and classical and heavily Latin-oriented rhythms. It’s a contemporary instrumental mix present in world music because there are so many influences from different parts of the world. But I’d call it contemporary instrumental world music.

That has to be exciting. We heard that Steve Vai joined you at the Canyon Club this past weekend.
Yes, yes! We’re friends and he showed some real excitement to come out and do that and I said, “God, please!” I feel the same way with him. I joined him a couple times in the last couple of years. He was more concerned for me. He said, “How are you still doing this again with your hearing?” You know you’ve got to protect yourself. Volume has taken its toll over the years.

Your tinnitus forced you to move away from the electric guitar years ago. How were you able to pick it back up?
You have to put Plexiglas shields around everybody. You have special molds made that kill the volume and bring it down 20 decibels. Every musician loses some degree of hearing, and some audiences as well. But then there’s maybe one out of twenty that, in addition to losing a degree of hearing, probably also suffer from tinnitus. That’s far, far worse than a reduction. Guys like Pete Townshend [of the Who] have a really bad case like me. There’s nothing you can do about tinnitus; you just have to live with the screaming in your head. But that’s par for the course.

What is the Best Guitar Lick Ever Written?