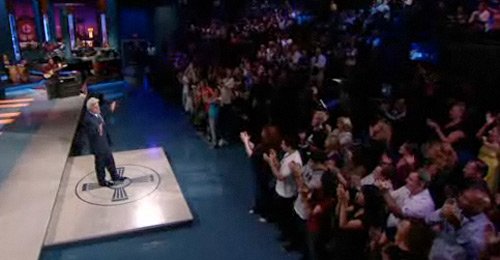 After a summer break from the late-night ratings race, Jay Leno debuted The Jay Leno Show on NBC last night. At 10 p.m.

As expected, some things about the show were familiar (Hi Kevin. Hi “Headlines.”), and some things were new (out from behind his desk during interviews, Jay got up close and more personal with his guests than he could on The Tonight Show).

Jerry Seinfeld, in a tux for the occasion, basically did stand-up sitting down, but he got big laughs—I think someone actually howled when he told Jay that “in the nineties, when we quit a show we really left”—and even Oprah made an appearance, literally dropping in on their conversation via satellite like some ratings angel.

But it was an emotional, momentarily speechless Kanye West—who was scheduled to perform on the show with Jay Z and Rihanna but decided to sit down as well to apologize for his outburst at Sunday’s MTV Video Music Awards—who proved Jay’s still in the game—just playing a little earlier.