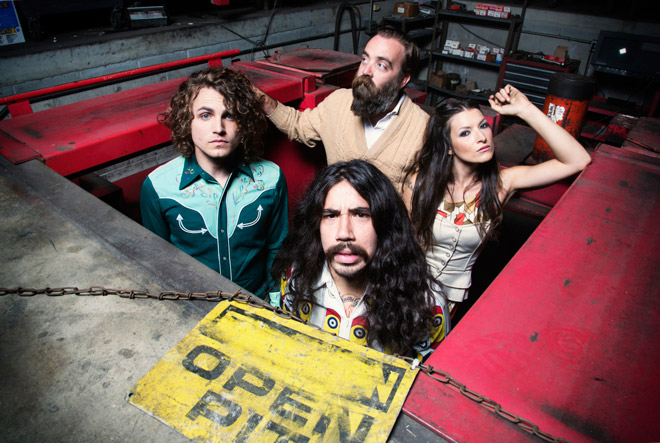 Photo courtesy of The Burning of Rome

January is filled with some of the year’s longest nights. With winter, such as it is in Los Angeles, in full swing, cut through the malaise of those dark, lonely evenings by taking shelter at one of the following band residencies during the inaugural month of 2013.

PAPA at the Bootleg Theater (Jan. 7, 14, 21 and 28)
Another in a string of nearly un-Googleable bands (for example: hi, NO), PAPA released the exceptional A Good Woman is Hard to Find EP in 2011 and toured with Grouplove this past autumn. The band’s residency is being sponsored by KROQ, meaning that someone is listening somewhere in corporate America, and PAPA may not be long for small venues like this.
Think: Blues-driven throwback rock and roll, with a stadium rock feel on tracks like “Song For Mike Gigliotti.”
Listen: via Soundcloud

Yellow Alex at the Satellite (Jan. 7, 14, 21 and 28)
Not to diminish the musical ability of Alexander Gedeon and his crew, but the best reason to check out the band has to be its live performances, which feature choreographed stage moves and sartorial choices inspired by the Village People. The funk and soul chops are compelling as well, though.
Think: The soul and theatricality of Purple Rain-era Prince and the Revolution.
Listen: via Bandcamp

Feeding People at the Echo (Jan. 7, 14, 21 and 28)
Its latest single, “Island Universe,” has earned the five-member outfit airplay everywhere from 98.7 in L.A. to the BBC. Lead singer Jessie Jones is an indie rock femme fatale with a sweet voice that barely conceals her sinister motives.
Think: Early 1970s AM radio – at times psychedelic, at times folksy, at times straightforward rock and roll.
Listen: via Soundcloud

The Burning of Rome at the Central Social Aid and Pleasure Club (Jan. 8, 15, 22 and 29)
Possibly the only band mourning the Mayan non-pocalypse, The Burning of Rome combines goth with melody to create dark but danceable tunes. The band is also in the running for Best Song Title of 2012 with “Ballad of an Onion Sprout.”
Think: Tim Burton producing Grouplove; bouncy music with bite.
Listen: via YouTube

Broken Anchor at Piano Bar (Jan. 3, 10, 17, 24 and 31)
When not placing songs on the Jersey Shore finale or recording music videos with Rachael Leigh Cook (for a cover of “Flagppole Sitta,” no less), the indie rock duo found time to release Vol. III, their third EP. This is Budweiser tallboy music, best heard coming from the stereo of a used Cadillac that required way too much effort to whip back into street legal shape.
Think: If the members of Band of Horses had grown up somewhere along the Pacific Coast Highway.
Listen: via Soundcloud