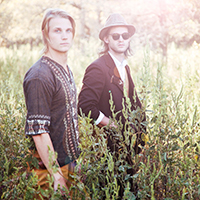 Roots and Americana group Jamestown Revival was formed in 2010 by Jonathan Clay and Zach Chance, two guys who have been singing together since they were kids in Magnolia, Texas. It shows. When the duo played the Troubadour in March as an opening act for the Wild Feathers, their easy harmonies and fresh take on classic twang stole the show. This Thursday (May 29), they’ll return to the Troubadour—as headliners.

Clay and Chance both flirted with solo careers but bumped up against frustration and disappointment. They shifted gears and forged ahead as a duo, and Jamestown Revival was born. Taking a leap of faith, they left Texas for California, settling in Los Angeles. When they arrived, they knew no one in the music industry and had written only a few of the songs that would end up on their debut album, Utah.

Jamestown Revival built a following by playing casual house parties, open mics, and any club that would have the band. “It was a great time,” Clay says, “I went jogging on the beach every other day.” They are especially grateful to Room 5 Lounge and to the Hotel Café where they ultimately scored a Wednesday night residency. After KCRW put the band’s first single, “California (Cast Iron Soul),” in rotation on Morning Becomes Eclectic, Rolling Stone named Jamestown Revival a band to watch. Since Utah came out in February of 2014, the band has been touring the country including stops at SXSW and the upcoming Bonnaroo festival in Tennessee.

Utah features country-folk gems that blend tight Everly Brothers-style harmonies with songs that Clay describes as “100% autobiographical.” The lyrics reference the uncertainty of moving across the country, fear, survival, and cast iron skillets. “Homesickness is a sad feeling, but it can be a very inspirational thing too,” he says.

Home is a state of mind for the boys right now. About six months ago, they gave up their apartments in Los Angeles (Clay and his wife lived in Santa Monica while Chance lived in Culver City) because “L.A. became a very expensive place to keep our things,” Clay says. “At this point we call Austin home, but our bags can’t seem to leave Los Angeles. That line might end up in a song!” Actually, their belongings are in storage and Clay’s wife lives with Chance’s family in Austin.

Asked how he feels about touring, Clay says, “I’ll be honest, I am tired. I think your body and your psyche adjust to this, though, and you start to perceive this as normalcy—never staying in one place for more than a week. It can be really out of balance, but it’s a good thing.”

The pair is excited about headlining the Troubadour. Recalling the show in March, Clay says, “For a good while there we’d just been playing support positions, but you can feel it. You could feel the swell of support in the room. People were singing the words to our songs. It was a little bit intimidating to say it’s time, let’s go ahead and headline it. Los Angeles, ya’ll came out in a big way. It’s pretty awesome.”

This leg of the tour ends in July; then they take a three-week break before returning to the road. Somewhere in there, they’re hoping to find time to write new material. “We don’t have any kids at this point,” Clay says. “We don’t have a whole lot of responsibility as far as that goes, so it allows us to live by the seat of our pants. We’re trying to take advantage of it and work as hard as we can, while we can. Because at some point we’ll have to put down some roots, somewhere.”

Will it be Texas or California? We’ll have to wait and see.