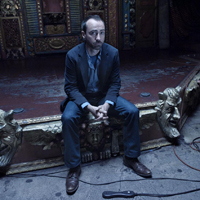 The Shins are releasing a new album, Port of Morrow, this month. How is it different than the group’s first three albums?
Well, the production is better, for one thing. I think the songwriting is more efficient and focused and I think it’s stronger. I’m biased, but I think I’m better at writing songs now.

Is that the result of having more experience, or did luck and inspiration hit?
It’s hard work and experience adding up. Maybe I’m being optimistic, but I think that writing songs is like most any other thing: if you work hard at it and care enough and think enough about it and you will get good results. When you see people getting older and then their pop songs aren’t cool anymore, it’s because they lose that self-critical side. I think they just get lazy.

So what does your song writing process look like? Do you carve out time to do it or are you waking up in the middle of the night and jotting things down?
Sometimes I do that. I always have a guitar in the house waiting and I just like to sit and play the guitar and write new parts. My favorite thing is those moments when I’m coming up with something new—where you don’t get exactly what it is yet but it sounds cool and you like it and it’s got a hook. I buckle down when it’s time to do a record. It’s somewhere in between the moments of inspiration and the really hard work where the thing that works happens.

The first single off Port of Morrow, “Simple Song,” is so catchy. Is it hard to get sick of playing a song like that?
We don’t have too many of those and that one is so new I’m certainly not sick of it yet. It’s the most abashed love song that I’ve ever done, so we will have to see if I can still stomach it in like a year.

You’re releasing the album, with support, on your own label. What’s that feel like?
Well Aural Apothecary is what I came up with in the ‘90s when I put out the first Shins EP and a couple singles and that was just me sending tapes off to the record pressing plant and getting the vinyl records and making covers and all that. I get to do that now again because our contract is up with SubPop. Columbia was generous enough to let me own my own masters and I get to have the imprint and stuff, but really Port of Morrow is on Columbia Records.

The Shins appears in pretty big text on the Coachella lineup. Are you excited for the festival?
It’s super cool. I’m stoked. My god, Noel Gallagher is playing before us. That’s amazing. In our minds we’re opening for Radiohead. If I thought about it, that would almost be scary. We’ve never even played Coachella.

Well we can tell you it’s a long, hot weekend. What’s your survival strategy?
I’m definitely told to bring the sunscreen, which my wife is on me all the time about anyway. I’ll hydrate. I probably wouldn’t be at a festival like this if I weren’t playing a show because it sounds so hectic and crazy. But that’s what a lot of people want. I’m just going to try and stay clean.

Will the band be doing a special set?
We’ve gone out dressed up before for a Halloween festival, but I don’t know—we haven’t really gotten our heads around the new songs as a live band yet, so we’ll have to figure that out first. Radiohead will have the benefit of lights and crazy shit, but I don’t know if Bon Iver or the Shins will be bale to use their regular backdrops in the desert. We’ll have to think about how we do it.

You have another group, Broken Bells, with Danger Mouse. Any news to share?
I’m going to tour for a year with the Shins and then it will be time to get back in the studio with Brian [Burton]. I was just hanging out with him last night and that dude is one of the coolest guys. It’s rare to have a friend that is so visibly happy for you when you do well. He was telling me how much he liked [Port of Morrow]. That was really cool.