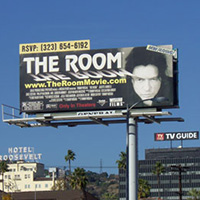 Share
Email
Facebook
Twitter
Pinterest
ReddIt
WHAT: The terrible movie that became a midnight sensation and then a book is going to be a movie that might not be terrible—but it’s going to star James Franco.
VERDICT: Break out the spoons! That’s right. James Franco and Seth Rogen are remaking The Room, the ultimate cult movie. Written by, directed, and starring Tommy Wiseau, it’s a cinema stinker for the ages—and that’s its charm. Franco should tread lightly. If he tries making the movie better, he’ll only be making it worse. Franco…you’re tearing us apart!