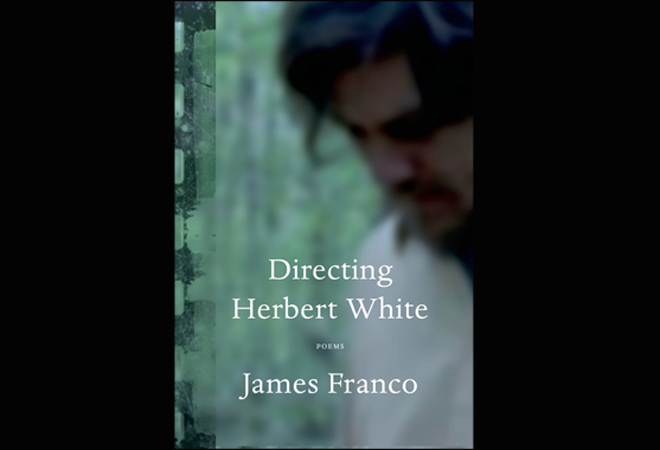 James Franco is one of the busiest—and most versatile—guys in Hollywood. When he’s not acting, directing, attending college classes, teaching college classes or starring in Broadway productions, he’s writing books.

And he’s taken plenty of flak for his literary aspirations. In 2010 his book of short stories, Palo Alto, came out and many readers (including his fans) asked: “Would this have been published if it hadn’t been written by James Franco?” Maybe not, but it’s hard to fault someone for trying too hard. Conversely, it’s easy to scoff at an actor publishing poetry until you remember that he was once just a kid who was working toward an English degree at UCLA and dropped out to try acting.

The poems in his new book of poetry, Directing Herbert White, revolve around Hollywood, specifically the dirt underneath the neon glare. In “When My Father Died,” Franco recounts getting the news while in full makeup on the set of Oz the Great and Powerful. “Because” is about a handsome, rich movie star who seems to have it all, but everywhere he looks all he can see are people who hate him.

The book is an amalgamation of the hodgepodge pieces of life that have influenced and stuck with Franco. Who was he before he was an actor? Who were his friends growing up in Palo Alto? His heroes? His crushes? There are film sonnets and odes to departed actors like Marlon Brando, Heath Ledger and Brad Renfro. There are even poems about places that have played a part in his life, like that time he lived at the Chateau Marmont.

In between previews for his Broadway show Of Mice and Men, Franco talked with us about his new book and shared some of his passion for poetry.

How long have you been working on Directing Herbert White?
About four years. I started some of the poems when I started studying at Warren Wilson. It’s a writing program for poets and fiction writers in Asheville, North Carolina. Because it’s low residency, they get the best poets in the country to come and teach.

Where did the book’s title come from?
“Herbert White” is a poem by a poet named Frank Bidart who has become a good friend of mine. It’s the first poem in his first book of poetry, which came out about 40 years ago; it’s a very dark poem about a murderer. When I was at NYU I was supposed to direct a short film that was an adaptation on some sort of written work. At Warren Wilson, a poet named Gabi Calvocoressi brought it in for a seminar, and it was very striking and disturbing and interesting. I immediately knew it was the poem I wanted to use for my adaptation.

I got in touch with Frank through my teacher Jay Anania who had done a documentary about Frank. I asked for permission to adapt his poem, and we became friends immediately. He is a big film fan and actually wanted to become a director when he was younger growing up in Bakersfield, California. It was the year Milk and Pineapple Express came out, and I was pleasantly surprised to find out that Frank was a fan of both films. He gave a very in-depth analysis of Pineapple Express; it was very touching.

Soon after, we became very, very close friends, and I made the movie. It’s a short film called Herbert White and it stars Michael Shannon from Boardwalk Empire. When I wrote this book I was looking for a title; none of them fit because my poetry kept changing and different kinds of material were going in [the final book]. Then Frank wrote a poem called “Writing ‘Ellen West'” for his latest book Metaphysical Dog. It’s sort of an essay-poem about writing one of his most famous poems, “Ellen West.”

I really liked the form of “Writing ‘Ellen West.'” The way it builds on another poem like a behind-the-scenes look at creating a poem. It inspired me to write the last poem for my book, “Directing Herbert White,” which used the same approach to talk about the making of my short film.

It seemed like a great title for the whole book because Frank was such a big influence not only on the movie but on all the poems in the book. Anyone who knows Frank in the poetry world will tell you that he’s one of the best readers of poetry and gives great notes. He helped shaped my book, so the title Directing Herbert White seemed apt for many reasons.

Were you in New York when he recently won the NBCC award for Best Book of Poetry?
I wasn’t there. I was in rehearsals but it’s amazing he won. Just great.

Is there anywhere we can we see the short film Herbert White?
That’s a good question. It was supposed to come out through Dave Eggers’s DVD series Wholphin. I guess they discontinued Wholphin, so it never came out. Then I put it out through a very limited book edition called Moving Pictures Moving Sculptures; there are a bunch of DVDs in there and Herbert White is on them. But we are planning to somehow put the short film out. Maybe we’ll just put it online.

You wrote about several celebrities in this book, including a couple of poems about Lindsay Lohan. Have you gotten any response from any of these people?
No, I didn’t write anything bad about them. And Lindsay herself has told lies about me with her people-she’s-slept-with list! So I feel like what I said is much less than what she’s said.

Which of the poems in this book did you most need to write?
I’ve found that I like series in whatever I do. I like longevity. I like a continuing kind of narrative. I like sequels. I like building on work that I’ve done. When I work on a subject I like that subject to continue. There are a series of poems in the book called “The Best of the Smiths Side A and Side B,” and they sort of follow a few characters as they go through high school. The title, “The Best of the Smiths,” was a way to touch on the deep feelings that one experiences in high school that feel extremely intense but from another perspective feel very clichéd or melodramatic. That’s sort of the way the music of The Smiths works, so that was how I wanted those poems to work.

So is this book a continuation of your book Palo Alto?
In a way. The book Palo Alto is a set of connected stories, so you get much more of the exterior behavior. You get more of a sense of narrative. In the poems, although you get place and character, it’s a much more inward-looking presentation of those characters.

Because you’re an actor you receive extra scrutiny when you come out with a book of poetry. How do you handle that?
I’m an English major. I’m working on my Ph.D. in English literature, so this is something that has been a part of my life for a long time. My mother is a poet and a writer. It’s just one of my loves and I went to graduate school for it because I take it very seriously.

I know that my life as an actor obviously casts a shadow over what I’m doing with the poetry, but it allows me to get readers that maybe normally wouldn’t read a book of poetry. It also attracts skepticism and contempt prior to investigation, but I can’t think about that. It’s something I love, and if people want to judge my poetry through the lens of my acting then there’s nothing I can do about that.

As Beyond Baroque Turns 50, L.A.’s Poetry Scene Is Thriving