Home Film The James Franco Movie That Might Destroy a Studio 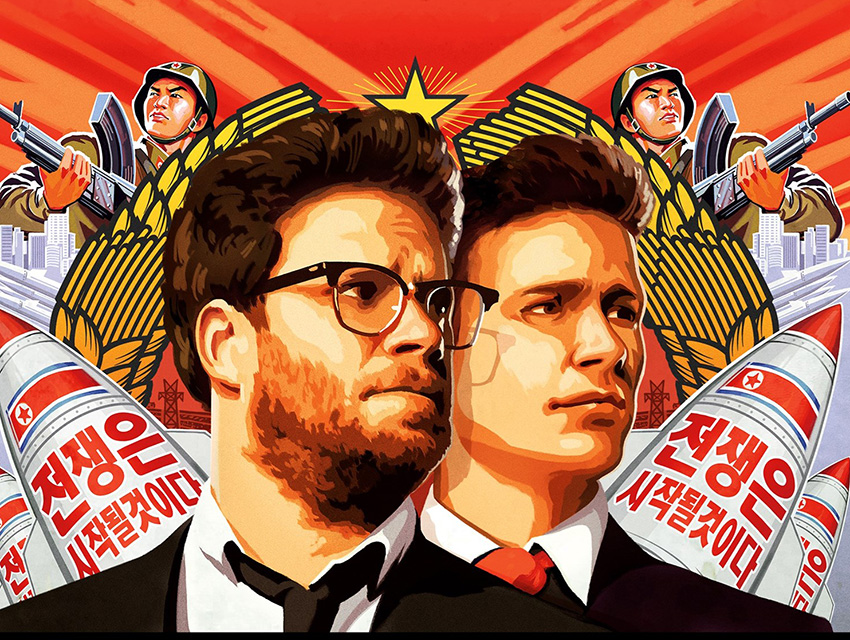 WHAT: What did James Franco do this time? We kid, we kid. On November 24, while Americans were brining turkeys, hackers breached the Sony Pictures network exposing the names, birth dates, and social security numbers of nearly 4,000 employees and leaking several movies (including the musical Annie and WWII drama Fury) to file-sharing sites. The attack was quickly linked to North Korean hackers, who were supposedly unhappy about the action-comedy The Interview. (That said, North Korea has denied their involvement in the incident, the destruction of which has been deemed “unprecedented in nature.”) The film, which is set for release on December 25, stars Franco and Seth Rogen as tabloid journalists who are recruited by the CIA to assassinate North Korean potentate Kim Jong-Un. Last week The Hollywood Reporter asserted that sources inside Sony think it’s more likely the hack was an inside job, possibly the work of disgruntled former or current employees. Yesterday, a group calling itself the GOP (nope, not the Republican party but the “Guardians of Peace”) posted a warning on GitHub threatening Sony with further consequences:

We have already given our clear demand to the management team of SONY, however, they have refused to accept. It seems that you think everything will be well, if you find out the attacker, while no reacting to our demand. We are sending you our warning again. Do carry out our demand if you want to escape us. And, Stop immediately showing the movie of terrorism which can break the regional peace and cause the War! You, SONY & FBI, cannot find us. We are perfect as much. The destiny of SONY is totally up to the wise reaction & measure of SONY.

THE VERDICT: It’s a fascinating whodunit, but we’re skeptical about the North Korea angle. While dictators are a notoriously humorless bunch, the country is such an ideal scapegoat for American anxiety that it’s a little too perfect. Yes, there’s plenty to be worried about when it comes to the hermit kingdom ruled by a mercurial, third-generation dictator prone to killing family members and purging rivals. But data breaches like the Sony hack often originate closer to home. If you were an angry North Korean leader who has kept a country of nearly 25 million people in your iron grip, wouldn’t you be smart enough to figure out that you’re giving a ton of free publicity to a movie plenty of Americans would’ve ignored? Besides, James Franco dabbles in a little bit of everything: acting, directing, poetry, visual art. His stint as a political provocateur will likely be brief. Regardless of who’s responsible for the Sony hack, the studio shouldn’t cave in and pull the film. If we can’t watch a James Franco/Seth Rogen stoner action-comedy on Christmas Day, haven’t the terrorists already won?

BONUS: In addition to medical records and salaries, the info released by hackers included celebrities’ secret aliases. Good luck to you, Johnny Madrid (aka Tom Hanks) and Cash Money (aka Jessica Alba).

Is Joan’s on Third Santa Monica a Big Fake?

The Interview is Back On