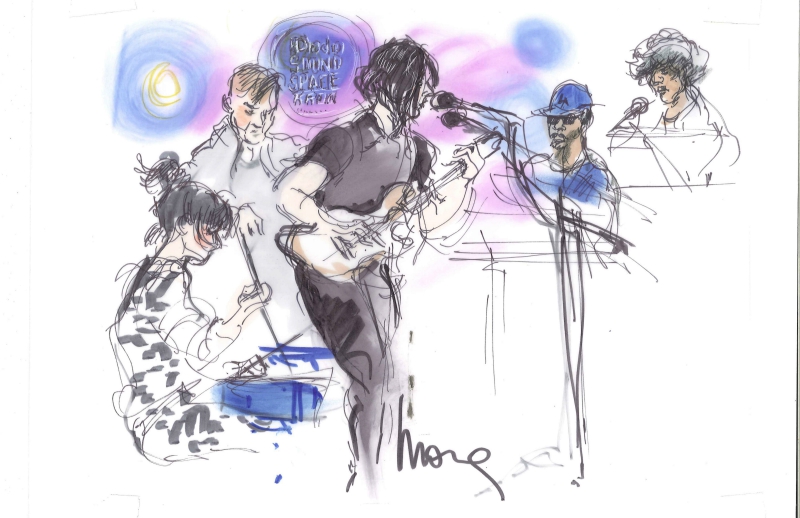 There are few hours of the week less rock ‘n’ roll than 11 a.m. on a Monday. But that’s when I join a line of people forming outside the concrete bunker of a building at the corner of Venice and Fairfax that is the home of KROQ-FM. Here, in about an hour, Jack White will perform a brief set of songs from his new album, Boarding House Reach, in something grandly called the “HD Radio Sound Space,” to be broadcast later in the week.

There’s something vaguely oxymoronic about the idea of Jack White performing live for HD Radio. He’s a famously analog man in a digital world, the kind of guy for whom a tube amplifier and some vintage KLH speakers—the kind with beige fabric covering the woofers—is all the “high definition” he needs. At his Third Man Records headquarters in Nashville, bands’ performances are cut live to acetate, not broadcast on the local affiliate of a corporate radio chain.

So what would it be like to see such a retro-rock shaman pacing the confines of the KROQ HD Radio Sound Space? I had to know.

Actually, in fairness to White, he’s never really been the Luddite the press often paints him as. No one with an aversion to new technology could ever headline so many major festivals, or play so many screeching guitar solos with the aid of a pitch shifter. And Boarding House Reach is the strongest evidence yet that the primitivism of his White Stripes days was a phase, not a philosophy.

The new album features synthesizers and drum loops and all manner of electronic murk. It’s still recognizably a Jack White album, with the bluesy chord progressions and ranting rock-preacher vocals he’s famous for, but one with a more 21st century, cut-and-paste sensibility. That time he spent working with Beyonce and A Tribe Called Quest in 2016 has clearly rubbed off. (Not that White has abandoned his love of the quaint entirely; to document the KROQ performance, HD Radio hired a courtroom sketch artist.)

About 15 minutes after our motley group of music journalists and KROQ contest winners files into the HD Radio Sound Space—which, it turns out, looks pretty much like the Echo, except with more elaborate lighting and no bar—White and his band take the stage and rip into “Over and Over and Over,” the Jack White-iest track on Boarding House Reach, with a low-slung, fuzz-tone riff as its backbone and one of those pitch-shifted solos that sounds like Jimmy Page being run through a Gameboy. From there, they blaze through “Battle Cry,” a stomping instrumental released as a single-only in 2017, then three more tracks from Boarding House Reach, before finishing with the crowd-pleasing one-two punch of the Raconteurs’ “Steady As She Goes” and the swaggering title track from White’s last solo album, Lazaretto. As though to foil any attempt on KROQ’s part to make it too high-def, the whole performance is excruciatingly, distortedly loud. After the set, KROQ DJ Stryker has the unenviable task of interviewing White, who has gotten less persnickety over the years but still clearly takes some delight in confounding members of the media. He answers three questions with random stories about his “prison days,” and an admittedly clumsy query about his songwriting process with a bone-dry, “There’s a website called writeasongforme.com. I go to that a lot.”

But he also says some revealing things, like citing Rage Against the Machine as an unlikely influence and seeming to credit Meg White as the main architect of the White Stripes’ stripped-down approach. “What she brought to the band was this amazing minimalism,” he says, comparing her style of playing to the De Stijl art movement after which the duo named their second album. “I would write a song and she would reel it in and it would become minimalistic and very much more powerful.” Maybe he’s over-compensating for a dickish-sounding aside in a recent Rolling Stone interview, in which he implied that the White Stripes was basically a Jack White solo project. But when he says it, it sounds sincere.

Maybe that’s the best way to think about Boarding House Reach: It’s the anti-White Stripes album, Jack White going maximalist, attempting to shed once and for all any comparisons to the band that launched his career. It’ll probably sound great on HD Radio. Unless the band was playing too damn loud.