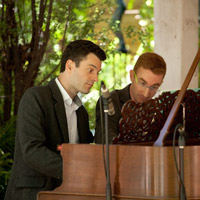 A garden in Mar Vista was transformed Sunday into a concert venue à la Alice in Wonderland (minus the Queen of Hearts and the Mad Hatter) for Jacaranda’s pre-season concert “50 Fingers & 88 Keys.” Renowned for its carefully curated classical music series, Jacaranda took concertgoers on a trip down music’s rabbit hole with ethereal works by Erik Satie, John Cage, and other composers performed by five pianists who will play during the upcoming season. Sunny skies, wine, and sculptures (courtesy of local artist Tanya Ragir) set the stage for artistic director Patrick Scott. “In the spirit of John Cage, we have a plan,” Scott said, “but then reality steps in.”

The first half of the performance featured music from composers David Lang, Tobias Picker, Nico Muhly, and Satie with pianists Danny Holt and Steven Vanhauwaert in the driver’s seat. Holt enthralled audiences with his interpretation of Lang’s “spartan arcs,” a toccata-like piece that pulses from beginning to end with tantalizing serialist-like cycles. Taking the wheel for Picker’s “Old & Lost Rivers,” Vanhauwaert displayed his precise control amid the ebb and flow of wandering melodic lines, which ended with a deliberate whisper.

Joining forces, Vanhauwaert and Holt treated the audience to a performance of Satie’s provocative “Parade,” an absurdist ballet originally created with Pablo Picasso and Jean Cocteau. In slapstick comedy argot, Satie (along with Holt and Vanhauwaert) took the powder and left the listeners holding the bag. Fortunately, the audience was amused. At intermission audience members couldn’t stop talking about the “Parade.” As they grazed at the buffet of salads, pasta, and berries, patrons got the chance to chat with Vanhauwaert and Holt, both of whom said they had fun with the piece.

The second half took the crowd into more psychedelic territory with trancelike works from Alvin Lucier, Veronika Krausas, Kaija Saariaho, Harrison Birtwistle, Cage, and Olivier Messiaen. Pianist Genevieve Feiwen Lee’s rendition of Lucier’s “Nothing is Real (Strawberry Fields)” had spectators craning their necks. Lee performed fragments of the famous Beatles’ melody on the piano and recorded them in a sound system inside a teapot. She played back the snippets, lifting the lid and sometimes the entire teapot to alter harmonies and resonances.

Pianist Aron Kallay played three of Veronika Krausas’ “Un-Intermezzi,” which she described as “un-Brahmsian miniatures,” before Grammy Award-winner Gloria Cheng closed out the afternoon with a smorgasbord of reveries. She reeled listeners in with her clarity and direction, then broke the dreamy haze with Birtwistle’s “Betty Freeman: Her Tango.” It was a brief but wonderful spin on the popular dance before the presentation of Messiaen’s “Preludes: Les sons impalpables du rêve.” A complex work of tonal melding, Cheng played the Messiaen with tremendous force, nearly enough to blur the lines of sound and reality.