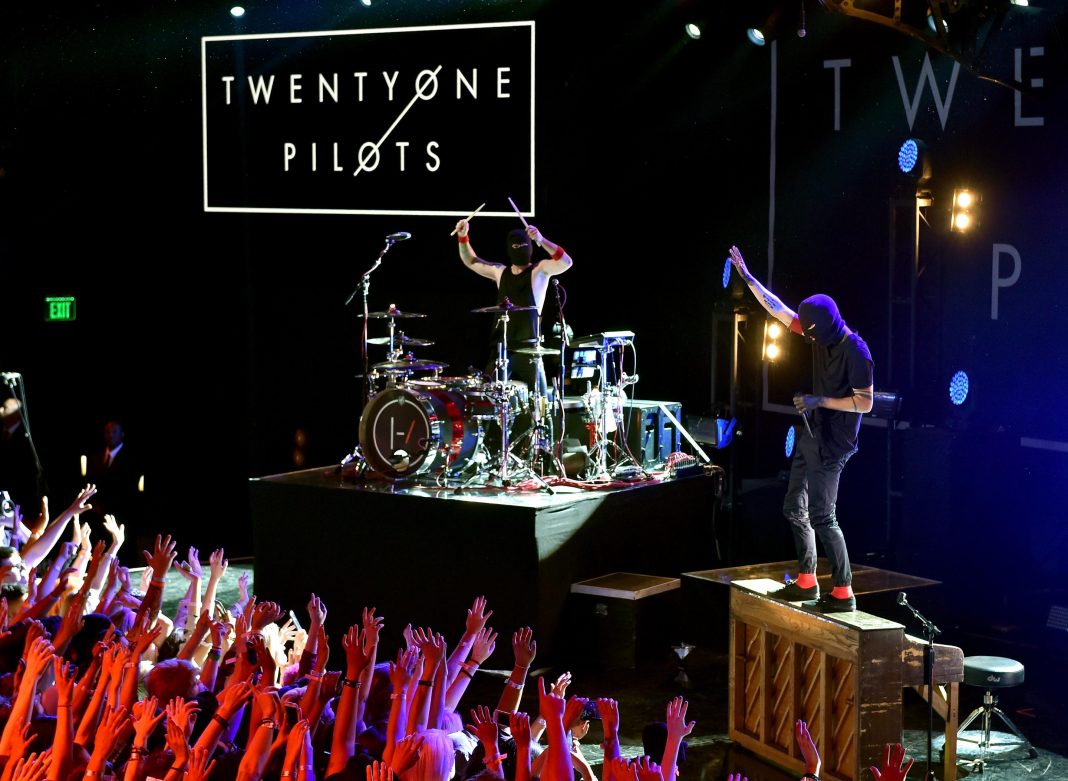 Unless you lived in Ohio between 2009 and 2012, it’s likely you got wise to rock-rap-pop-synth duo twenty one pilots when the rest of us did—last year, when their single “Stressed Out” took them mainstream. Since then the Columbus-bred pair, comprised of singer and multi-instrumentalist Tyler Joseph and drummer Josh Dun, have been enjoying the kind of success angsty twenty-somethings write songs about (themselves included): their mid-year albums sales are nearly double that of rock icons like Coldplay, David Bowie, and Radiohead, and they’re in the middle of a 58-date arena tour (complete with two nearly-sold-out performances at Madison Square Garden in August). Not too shabby for kids who, only three years ago, played the side stage at KROQ’s Weenie Roast.

On Saturday, the band played 24 songs over two hours for a sweaty, dance-crazed, sold-out crowd at the Forum. Everything about the show was genreless, from the diversity of the audience to the hybrid quality of the tunes. But more importantly, it was a sign of what’s to come; if the band’s meteoric rise is indicative of anything, it’s that they’re going to be a cultural force, and you’ll want to be a part of it. Here are a few reasons to support them by purchasing their entire discography—and why you should catch them next time they’re in town.

They Put Their Music in Your Hands—Literally
Dun and Joseph are nothing if not fans of audience participation. This weekend, a pink-haired Dun crowd surfed while playing his drum kit—meaning he put his life in the hands of fans in the pit, who held the platform he played on aloft. Joseph, on the other hand, ran across the hands of the pit while inside of a gigantic inflatable hamster ball. It’s that sense of involvement that leaves enthusiasts feeling like they are part of something larger than themselves—and who can’t get behind that?

Tyler Joseph May or May Not be David Copperfield, only Cooler
Trickery, misdirection, sleight of hand—call it what you will, but Joseph could easily be a member of the Magic Castle. At one point on Saturday, he was playing piano on stage. All of a sudden he collapsed onto the instrument, only to be spotlit moments later in an upper deck of the venue. Sorcery is the only logical explanation. But any band who melds excellent music with mind-blowing stagecraft is a band we want to be following.

You Don’t Listen To a twenty one pilots Concert. You Experience It
Dun and Joseph have built a following of all-lyric-knowing-fanatics in a very short time. From tweens to tattooed adults, the crowd at the Forum never stopped singing their complex rock-rap verses. They jumped when Joseph said jump, an arena of fists pumping up and down in unison with Dun’s beat. You didn’t have to be in the pit to feel like you were part of the show—the entire arena was transformed. Intimacy and interconnectedness like that is generally achieved when a band is playing in a basement on its way up the ladder, not when they’re topping the charts.

At the End of the Day, TOP Cares About Their Fans More Than Themselves
Saturday’s concert was completely focused on audience satisfaction, which is a welcome change for an arena show. The energy pulsing through the crowd felt rare and special, with Dun and Joseph hitting all of the emotional beats at the right time. What more can you want from two dudes in black ski masks.

The Proposed Inglewood Clippers Arena Cleared One Legal Hurdle, but More Lie Ahead