Home Uncategorized It’s the Coachella of Comedy: 4 Great Reasons to Laugh at Festival... 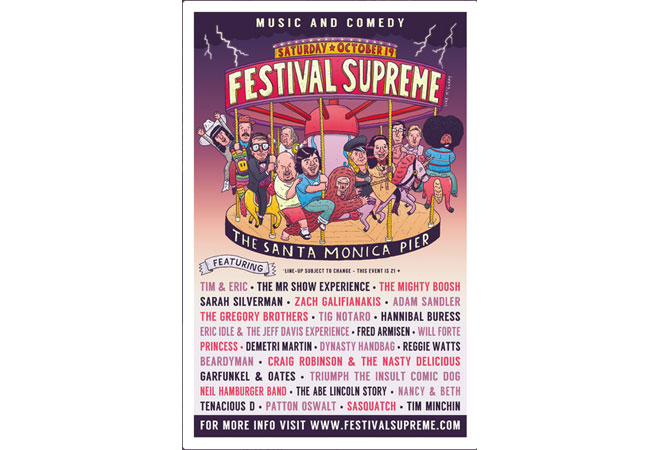 It’s the Coachella of comedy. Organized by Tenacious D bandmates Jack Black and Kyle Gass, Saturday’s Festival Supreme will turn the Santa Monica Pier into a multi-venue campus dedicated to joke-throwers of all stripes and sizes. More than 20 acts take the stage from big names like Zach Galifanakis, Adam Sandler, and Sarah Silverman to upstarts like Hannibal Buress, Demetri Martin, and Reggie Watts.

Like those big music festivals, this comic confab will also showcase bands whose songs take a walk on the funny side. Garfunkel and Oates are known for creating cute, slightly twisted folksy music. Portlandia star and Saturday Night Live alum Fred Armisen is actually a pretty good drummer who has shown off his skills on various occasions. Don’t miss Princess, fellow SNL actor Maya Rudolph’s Prince cover band. And Tenacious D is actually one of the best live bands around, conjuring hilarity while executing epically stellar guitar licks.

While the roster of nearly 30 acts may be too much comedy for any single human to take, here are eight great gags by some of the festival’s jokesters to get you started.