Home TV It’s All About Netflix at 2013 Emmy Nominations 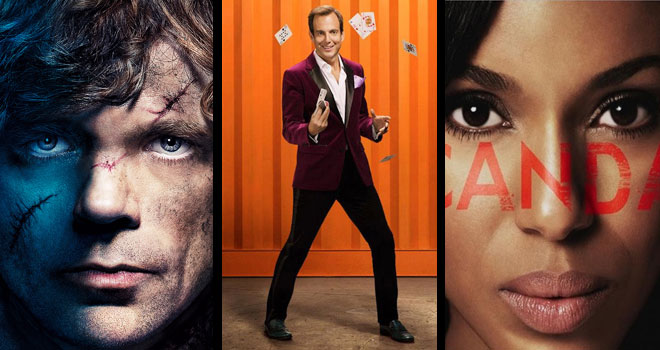 If 2012 was the year of Homeland, then 2013 is the year of Netflix. The streaming service’s first original drama, House of Cards, a political thriller starring Kevin Spacey, was nominated for nine Primetime Emmy Awards. The nominations, which were announced this morning, also included three for Arrested Development and two for Hemlock Grove, bringing Netflix’s total to 14 and marking the first time that shows released only via the internet have been nominated for TV’s highest honor. Think of it as the year the Internet made history—again.

The nominees in all the major categories are listed below, but here’s a quick recap of what’s trending up, what’s on a downhill slide, and what’s quivering in between.

Louie: The show doubled its nominations from three in 2012 to six in 2013. Star and creator Louis C.K. won an Emmy last year for Outstanding Writing for a Comedy, and his dark, painfully funny show is only getting better.

Game of Thrones: Didn’t think the death of Ned Stark was harsh enough? How about killing off his wife, son, daughter-in-law, and most of the adults in the Stark clan? Season 3 was darker, more violent, and more brutal than any TV drama out there. When it comes to literary epics translated to television, Game of Thrones is the gold standard—at least right now.

Behind the Candelabra: It’s the heavy favorite to win Outstanding Miniseries or Movie, and the stars of the Liberace biopic, Michael Douglas and Matt Damon, will compete against each other for Outstanding Lead Actor in a Miniseries.

The Big Bang Theory: In its umpteenth season (okay, sixth season), the show keeps building. This year it received eight nominations, three more than last year. They include nods for Jim Parsons and Mayim Bialik and a nomination for Outstanding Comedy Series where it’s up against some tough contenders: Girls, Louie, Modern Family, 30 Rock, and Veep.

Scandal: The show didn’t start out with a huge viewership but it has steadily built an audience—and a lot of buzz—thanks largely to star Kerry Washington’s nuanced performance as Washington D.C.’s most competent (and stylish) crisis management expert. Thank goodness she was nominated for Outstanding Lead Actress in a Drama.

The First-Timers: In their first eligible year, these middle-of-the-road shows—neither brilliant nor risible (except for The Newsroom; utterly risible)—all earned at least two Emmy nominations: The Americans, Nashville, Da Vinci’s Demons, Elementary, The Newsroom, Revolution.

Breaking Bad: It’s criminal that in 2012 Breaking Bad, one of the best television shows of the decade, only won one of the 13 Emmys for which it was nominated. This year, the series has again received 13 nominations including the biggies: Lead Actor in a Drama, Supporting Actor (twice), Supporting Actress, Outstanding Writing, and Outstanding Directing. If the show doesn’t walk away with more than one statuette, there is no god in heaven.

The Office: Sure, it received three nominations this year as opposed to last year’s big fat zero, but these feel like pity nods—pats on the back for a series that had been stale for years but managed to infuse a little life (Jim and Pam argue!) into its farewell season.

Modern Family: Who cares? Seriously, who cares? It’s a funny show, but it’s not the be-all, end-all of TV comedy. Last year, it received 14 nominations and won five awards. This year it received 12 nominations. Enough already. Although it’ll be fun to see Jesse Tyler Ferguson, Ed O’Neill, and Ty Burrell compete gainst each other in Supporting Actor in a Comedy Series.

Boardwalk Empire: It’s not that HBO’s Jazz Age gangster drama did badly this year—it received 10 nominations, after all—but that’s two less than last year and none in the award show’s biggest category, Outstanding Drama. We’re glad Bobby Cannavale, who played the psychotic gangster Gyp Rosetti, earned a nod although he’s up against some tough competition, most notably from Peter Dinklage who plays everybody’s favorite character on Game of Thrones and Jonathan Banks as hard-bitten fixer Mike Ehrmantraut on Breaking Bad.

Downton Abbey: The British soap opera with all its upstairs/downstairs drama earned 12 nominations compared to last year’s 16. It’s an impressive total, but with the death of two major characters this past season—Sybil and Matthew—Downtown Abbey is on the verge of becoming a parody of itself and its genre.

Mad Men: The show only garnered 12 nominations compared to last year’s 17, even though this season was its strangest, its most socially ambitious, and its most self-reflexive. Don’t worry, you’ll still get to see Jon Hamm in a tux.