Home Uncategorized It Was 50 Years Ago Today 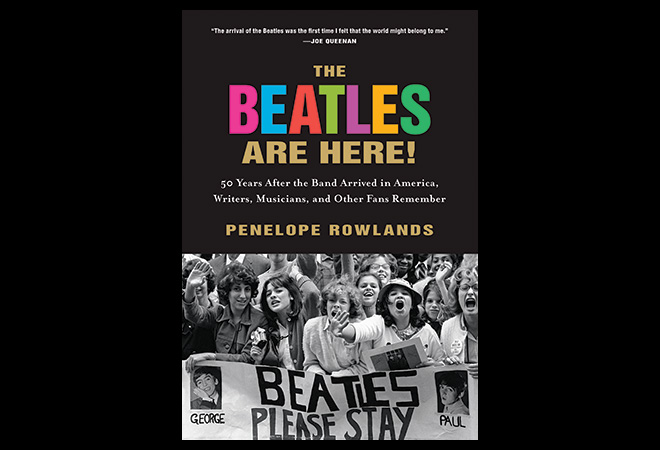 I was born in 1963, and for as long as I can remember I have been a huge Beatles fan. I was playing my older siblings’ 45s on a Show N Tell record player instead of the Winnie the Pooh EPs that came with it. While I’ve seen and read countless rock n roll documentaries and biographies where musicians explain how seeing the four lads from Liverpool on The Ed Sullivan Show that night in 1964 set them on their career path, for me there was never a “Where were you?” moment. The Beatles were always a part of my life. It’s been a revelation to read The Beatles Are Here!, a series of essays edited by Penelope Rowlands (Algonquin Books) in which fans, DJs, photographers, writers, and musicians recount how life changing that moment truly was.

Rowlands was one of those hysterical teenagers who tried to catch a glimpse of the Fab Four outside their hotel in New York, her face clearly visible in the photo on the book’s cover (It ran in the New York Times in September of 1964). Gathering stories from Fran Lebowitz, Billy Joel, Renee Fleming, Cyndi Lauper, Joe Queenan, Peter Duchin and many others, she delves into so many aspects of the era that I had never considered, reminding me how different life was in the ’60s.

John F. Kennedy’s assassination had occured just three months prior and the country desperately needed something to smile about. The civil rights movement divided the nation with mainstream radio stations refusing to play “black” music. Instead, they stuck to “safe music”: Steve Lawrence and Eydie Gorme, Frankie Avalon, Fabian, Lawrence Welk on television, and Elvis Presley in silly movies. So when American ears heard these songs for the first time, they were ready for something happy and fun. And teenagers were ready for something different—something their parents didn’t listen to.

The lyrics of the first songs you heard were simple and sweet and spoke straight to teenagers: “I want to hold your hand,” “She loves you, yeah yeah yeah.” The music was fresh and different with a danceable beat, unique chords and strong harmonies.

TV was in its infancy. You got most of your media—news, entertainment and music—from the radio, so there was a good chance you didn’t know how John, Paul, Ringo, and George looked. Part of the hysteria surrounding the Beatles, which hadn’t occurred to me, was based on teens starving for the chance to see them.

Through these entertaining anecdotes, even stories that detail how the girls in the photo on the cover of the book all find each other again, The Beatles Are Here! explores how the Fab Four affected people from vastly different walks of life. There was the photographer who shot pictures of them at that first press conference in New York and realized how intelligent they were, the DJ who watched armed guards arrive with their new records, the Catholic school girl who was crestfallen to find out Paul was Church of England and would have to convert to marry her, Cyndi Lauper’s mother screaming at her daughter while pointing to the pictures of the Beatles on the walls, “I want you and all your friends to clean this room up right now.” Ever the contrarian, Fran Lebowitz says it had no affect on her at all.

These personal stories explain how Beatlemania changed everything. Not just music, but hair, clothes, attitudes, media, stardom, and even how people talked. For the subjects of this book, as for many, February 1964 was when their lives truly began.