Home Uncategorized It Could Be Worse 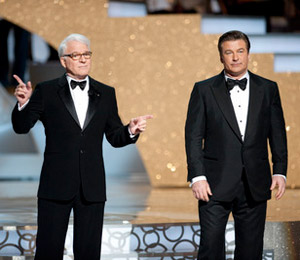 Criticism of last year’s Academy Awards telecast—in which host Hugh Jackman worked it from beginning to end—inspired me to defend that show as entertaining without being maudlin. I cannot muster the same enthusiasm for what went down on Sunday night. While Neil Patrick Harris may indeed be, as a friend at the Oscar party I attended declared, “the best thing to hit awards shows in I don’t know how long,” there was too much heavy lifting required of him in that lame opening number. Steve Martin and Alec Baldwin were too inside baseball or too out of line for me (Toyota jokes? A rapid acceleration to a terrifying death is not yuk-yuk material, boys). The Snuggies bit was mildly cute, but their Paranormal Activity spoof was a blown opportunity.

I wasn’t sure if this year’s proceedings were under-rehearsed or just poorly directed. The clueless entrances and exits, the long shots of onstage nothingness, the presenters in heels and trains who had to struggle down those impossible-to-navigate-without-an-escort stairs—who was at the switch? While we’re pointing fingers, I implore the director in the control room: Enough with the cut to black. You know exactly what I’m talking about, and it’s offensive. Precious wins, so let’s cut to…Morgan Freeman. Precious wins again, so let’s cut to…Samuel L. Jackson. I was begging for a few more of those random cuts to Kathy Bates. The awkward young presenters have got to go as well—could Miley and Kristen and Zac look more stiff? As for the entertainment, I would like a documentary done on the moment someone suggested an interpretative street dance to the score of The Hurt Locker, and someone else said, “Yes! Great idea!” Maybe the now-defunct Barbara Walters special should be replaced with Oscar Rehab with Dr. Drew: “So I’m sensing you’ve got a lot of unresolved feelings about whether Animated Shorts should be included in the primetime broadcast…”

Truth is, they weren’t the worst Oscars ever. That distinction goes to the 1989 show (think Rob Lowe and Snow White). In the March issue of the magazine, Robert Hofler writes about that debacle and the man who produced it, Allan Carr, whose life it destroyed. Hofler, a senior editor at Variety, has a new biography out on Carr. Next year, for a truly memorable show, a Snow/Lowe reunion might be in order.