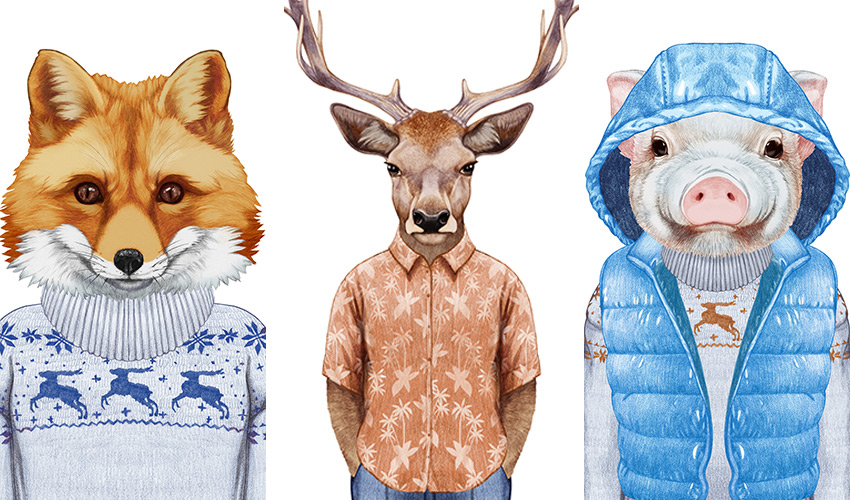 I’d like to begin by saying that all animals are wonderful in their own way. But today we’re here to discuss and judge a particular subset known as “It” Animals. You know what I’m talking about even if you think you don’t: “It” animals are a class of creature who’ve so thoroughly infiltrated your psyche that you wake up one morning to realize you’ve become “the girl who loves deer.” (This is why you’ve mounted a whitewashed deer bust with gold antlers to your bedroom wall, why the centerpiece on your dining room table is a chic mess of wooden antlers, and why your phone case bears a deers-in-scarves design. Deer have “it.”)

It’s often tough to call which animals fall into this category—there is no rubric for deciding which animals have more of “it” or less of “it,” and yet there is a conclusive delineation. Think about it: We’ve come to an unspoken agreement that Komodo Dragons do not have “it.” They are fascinating, to be sure, but will they ever merit an Etsy shop rife with Komodo Dragon paraphernalia including (but not limited to) keychains, necklaces, graphic coffee mugs (“Komodon’t Talk To Me Before I’ve Had Caffeine!”), door stops, quilts, frilly baby underwear, etc.? Hard to say, but no.

What we do know is that there are 13 animals who do have “it.” But even within that elite grouping, some of those animals are more “it” than others (this is not an opinion. It is a fact). Here is a definitive ranking of the most “it” animals, as determined by ubiquity, preciousness, a cultural relevance that has transcended their species, Hollywood appeal, and, for at least one, business savvy.

Owls have many things going for them. They can rotate their heads 270 degrees. They aren’t afraid to ask the tough questions. They are at the center of a devastating Harry Potter plot point. But their omnipresence is so overwhelming that they have, in turn, become obsolete. Once an animal has had a set of crocheted fingerless mittens made in its likeness—which, due to the lack of a finger pocket or a thumbhole, are really just arm warmers or maybe soft casts—they are relegated to the bottom of the “it” pile.

Penned on behalf of Professor McGonagall by props concept artist Miraphora Mina, a number of the letters sent to Harry had to be printed on paper light enough for real owls to carry; and for the scene in which a blizzard of letters blasts through the living room at Privet Drive, ten thousand envelopes were printed on even lighter paper (the kind used for bank notes) so that they could be easily blown all over the place. #TriviaTuesday #HarryPotter @MinaLimaDesign

At best, crabs are flown in from Alaska and served with drawn butter. At worst, they are referred to as “pubic lice.” At mediocre, they’re the crux of an interior decor scheme at your mom’s book club leader’s lake house.

Are you ready for Black Friday?! www.vintagechiccreations.com is! Don’t miss our incredible sales on our one of a kind pieces that are 100% handmade by a true local artist in Maryland. Everything is so coastal and rustic and beautiful! Sales start thanksgiving and quantities are limited! Bookmark the website now so you don’t miss out!

There is little more soothing than watching a tiny hamster eat tiny foods, like burritos or carrot slices. But sometimes, they also eat their own babies. So.

The llama is a fame-whore. (Things to consider: Disney’s The Emperor’s New Groove; Napoleon Dynamite, which forever ruined the lives of Tinas everywhere thanks to the line, “Tina, you fat lard, come get some dinner”; that video of two llamas running through a retirement community in Arizona; that one sweater J. Crew made a few years ago.) Nobody likes a fame-whore. Conversely, The Emperor’s New Groove is one of the most underrated movies of all time, and I own that J. Crew sweater.

Riding the Bambi wave since 1942 with impressive longevity. Less-cool cousin to the animals responsible for delivering presents to the entire world on Christmas Eve.

This pig is eating an ice cream at a tiny picnic table. Now there is no reason not smile! Have a good Saturday nerds pic.twitter.com/dmCOMRw9I6

A descendant of the English Bulldog, Frenchies are loyal and don’t like to exercise, making them better company than most romantic partners. Pros: So ugly they’re cute. Cons: Gassy. Extra easy to love when they’re on candy dishes, Instagram, and table lamps.

A broadcasting company. One half of a phrase used to describe silver-haired men. A fantastic character in literature. A uniting force (two animated foxes—the title character in Disney’s Robin Hood and Zootopia’s Nick Wilde—bridge a cultural chasm by providing common conversational ground). When it comes to fox goods, never buy this cowl, but consider this punny mug.

Beyond excited about our new “Zero Fox Given” travel tumbler! 😍 It’s already been added to Etsy and our website. *link in profile* 🐺

You think you know about sloths, but you have no idea. They’re named for one of the Seven Deadly Sins because “they’re lazy.” In reality, their slowness is a metabolic adaptation to conserve energy. Their fur is basically its own ecosystem, hosting everything from symbiotic algaes to moths. They literally can’t stop smiling. No one gives them enough fanfare, except Kristen Bell.

Scholars refer to Red Pandas as the “lesser panda” in comparison to Giant Pandas. But Desiigner‘s “Panda,” the art for which is a Giant Panda wearing gold chains, is the worst. Red Pandas will now be referred to as the more panda.

Whales have managed to monetize their majesty in a way few ocean-dwellers have. Artistic renderings of whales are often cartooney and adorable, unlike their real-life counterparts. The whole charade adds to their mystique an thus their overall “it”-ness, but they also reached peak “it” a few years ago. Which leads us to…

Despite an omnipresence that spans eons—Tchaikovsky was on the swan train back in 1875—we are always drawn back to the swan because of its humble origin story. Was there ever an animal so relatable? We were all ugly ducklings at one point, and so we commiserate with the swan’s early plight and subsequent triumph. The swan is unassuming yet regal, approachable yet formal. The crook of their neck gives them a posture of humility, meaning they aren’t too good to be printed on your clothes or even your (my) nails. And now, they are experiencing yet another resurgence: Pool floaties. Blouses. Paper products. Once you get wise to their “it” factor, it’s impossible to avoid full-blown, lasting obsession.

Marielle Wakim is the Arts and Culture Editor at Los Angeles magazine. She went viral once, which is not how she thought she’d spend her 15 minutes of fame, and she’d be much obliged if you’d remember that with extra sprinkles comes extra responsibility. You can follow her on Twitter @mariellewakim, on Instagram @marielle.m.n.o.p, and on her website. She wrote Let’s Explore the Shockingly Honest Dating Deal Breakers in L.A.