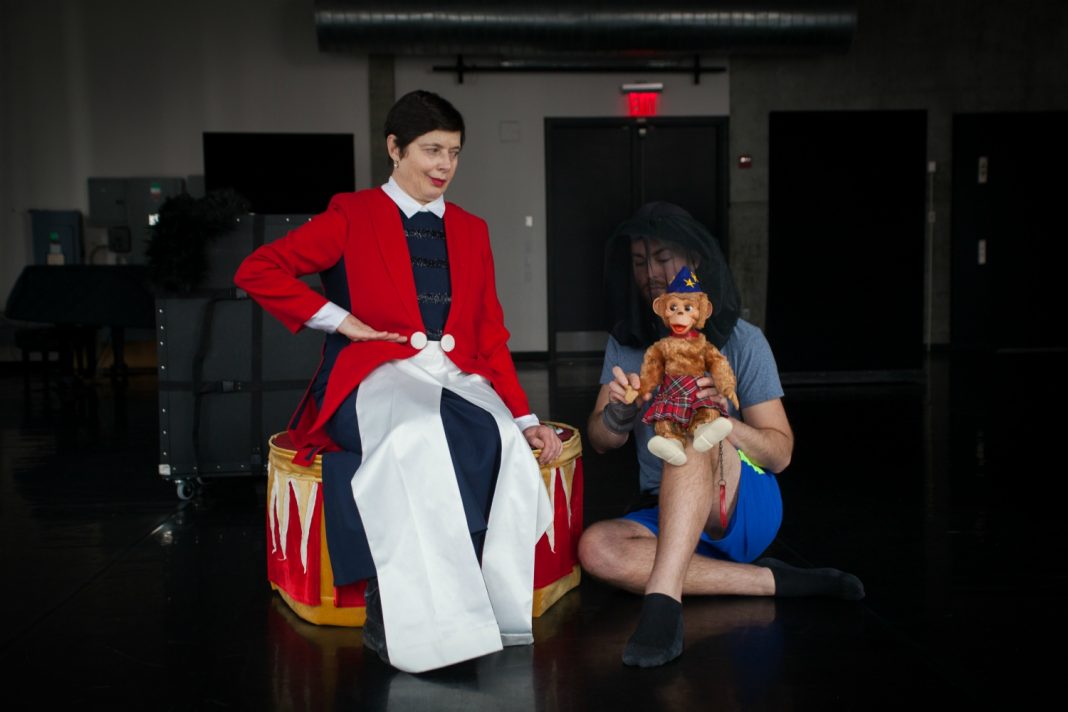 It’s been 11 years since Isabella Rossellini made Green Porno, a series of short videos for the Sundance Channel in which she dressed as different animals and acted out their mating rituals. The videos were entertaining as well as factual—Rossellini had enrolled at Hunter College in New York City to study animal behavior. The actress lives on a farm on Long Island and expects to earn her master’s degree in animal behavior and conservation this year. In the meantime, she’s created a stage show to share even more of what she’s learned. Link Link Circus—which comes to the Broad Stage for three shows starting Friday, January 25—is named for the many links between humans and animals, and features short comic films, animations, and a rescue dog named Peter Pan. In a recent phone conversation, she told us about farm life, biodiversity, and working alongside a dog.

How do you describe Link Link Circus to people who haven’t seen it?

We believed that we were distinct from animals, because we can choose our actions and have rational minds and free will, and we believed that animals are unable to choose their actions and that they act on instinct. I talk about different philosophers from Aristotle to Descartes that discuss the different formulation of this idea, but always distinguishing the human being as having what scientists call “cognition,” but not animals.

Animals didn’t have intelligence or the ability to decide. But if you look at Darwin—and I play Darwin, too—Darwin shows that the bones that form the hand are the same bones that form the wings of a bat and the same bones that evolved to become the fin of a whale. There are always five fingers. Darwin said, “We are different, but the same.” Now, with the new field of animal behavior, we applied this principle of a link, of different, but the same. Why should it be that with the skeleton, the hand can be a wing or a fin, but the brain is something that is unique to our species? Darwin argued—he never really experimented or studied it, but he argued that even when it came to cognition, the differences were “of degree, but not of kind.” Those were his words. Science has now proven that yes, there probably are different intelligences, but there are some things in common.

As someone who lives on a farm, has your research changed your relationship with animals?

It made it very interesting. There were things I didn’t know about farm animals. One of them is that a lot of farm animals are very endangered. We’re all familiar with heirlooms—the rare types of vegetables that you can’t find in the supermarket, but you can find at farmers’ markets. Industrial farming favored, let’s say, one type of spinach or one type of asparagus, because it had a long shelf life, because it could travel in trucks and be shipped and won’t spoil, or whatever reason. Nowadays, you go to the store and find one type of vegetable of each kind. But, of course, there are different heirlooms. Breeds and heirlooms are the same, only we use breed for animals and heirloom for vegetables. Well, the same thing happens with animals. We eat, basically, one breed of chicken—the broiler. A lot of breeds of chickens have become endangered, some of them critically endangered.

You know how there is a seed farm in northern Norway where they keep varieties of seed? I think small farms like mine can protect the biodiversity of breeds. So at my farm, I only have heritage breeds of chickens, turkeys, and ducks that are highly endangered. This doesn’t mean all chickens are endangered—there are billions of chickens, but just one type of chicken. It would be the same as if we gave up all the breeds of dogs and we only had the dachshund. You would lose the bulldog, the herding dogs, the Labrador, the hunting dogs, you would lose everyone and just have dachshunds. That is what has happened with chickens, pigs, goats, sheep.… We’re losing the biodiversity. So now at my farm, I only have these very rare breeds.

I work with a wonderful organization called the Livestock Conservancy, based in North Carolina, a group of scientists that count breeds of farm animals that are endangered. They’re trying to bring back all these breeds so we don’t lose the biodiversity. 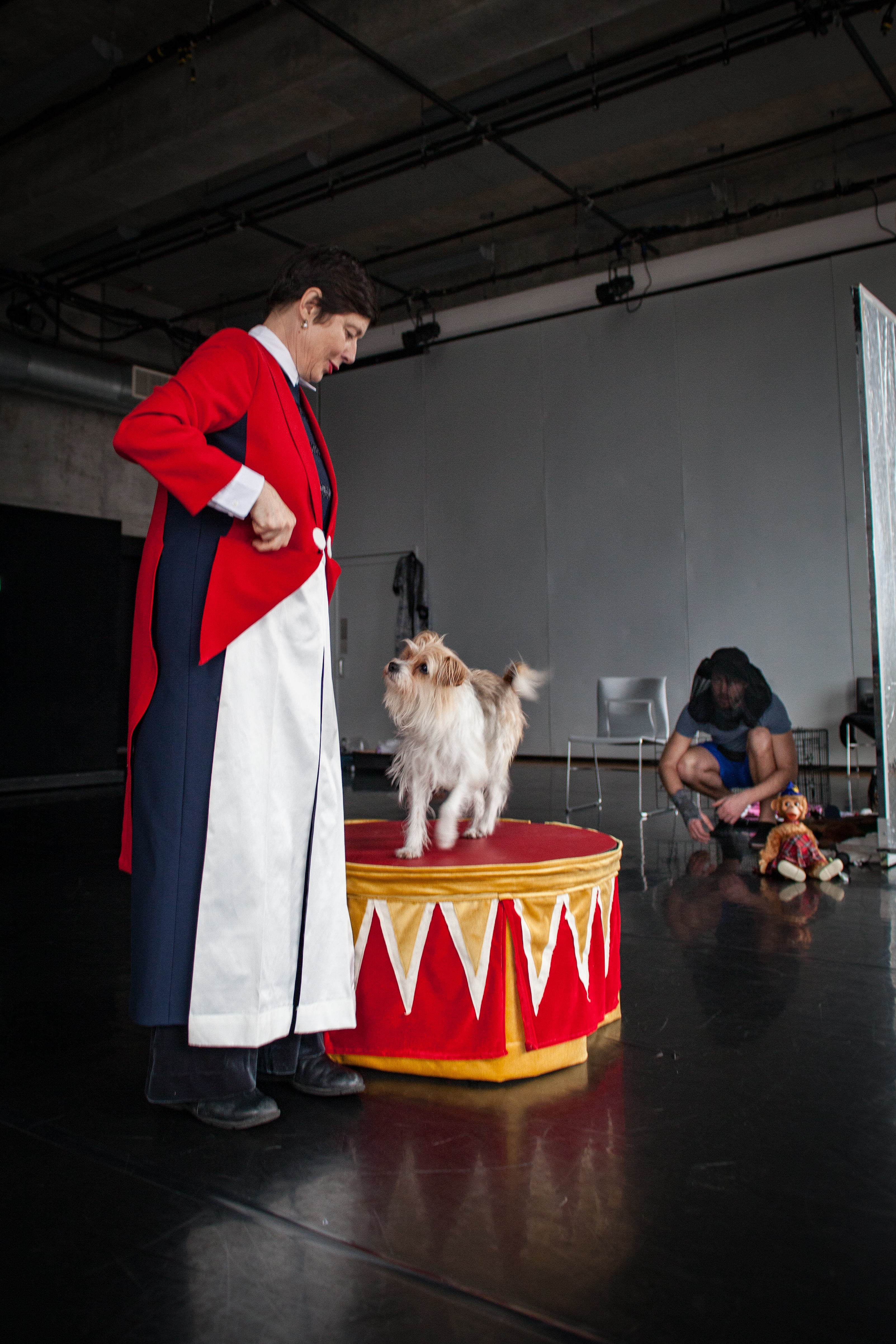 What inspired you to include a live animal in this show?

Well, to tell you the truth I was a little bit afraid—my first show was Green Porno, and it’s pretty easy to make people laugh about sex. It’s harder to do it with words such as “consciousness,” “mind,” “free will.” … So, I wanted somebody to help me charm the audience at this show. I thought, I’ll do it like a little circus, and I’ll have a little doggie with me, a trained dog. She’s there to charm the audience and she certainly does. In San Francisco, the audience was so enthusiastic, they yelled and applauded so much, she got scared. I had to ask the audience to contain their enthusiasm for her sake, because she looked at me with terror. She looked at me, “Am I doing something wrong? Why are they making so much noise?” But she’s a performer. She was good.

Why is it important to you for the show to be funny?

Everything I say is scientifically sound, but the show is about entertainment. I think especially when it comes to conservation, there is so much gloom. I would like not to add to that gloom. I can see the huge tragedies happening, but I want the comical aspect to be emphasized. Maybe through laughter, we make people love our animals and our planet, and therefore protect it.