Home Animals Isabella Rossellini Is the Ringmaster of Her Own Circus 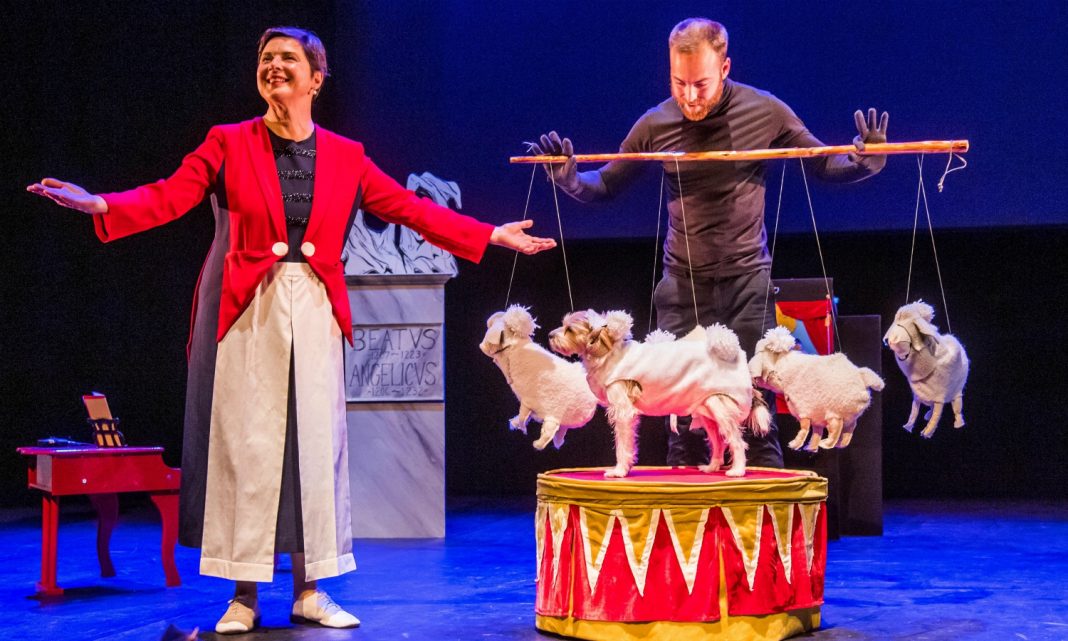 In the course of her eclectic career, Isabella Rossellini has been a model, an actress, muse to David Lynch, a shorts filmmaker, a writer, and a Hunter College masters degree student. These days, though, she’s playing ringmaster.

Her one-woman (and some animals) show Link Link Circus returns to town this week for shows at the Lodge Room in Highland Park (February 13, 14, 16, 17, 18 & 19) and the Malibu Playhouse (February 15). It’s described as a comedic and scientifically informed look at the links between animals and humans, per Charles Darwin. The Hollywood Reporter called it “the most fun college course you never took.”

We talked to Rossellini about her long and winding journey—and how she came to be the ringmaster of her own life.

We saw you looking so glamorous in New York in your modeling days—and then see you in videos with chickens. Would you ever have imagined that for yourself?

I don’t know what people expect—I just do what’s interesting to me. I love fashion, love modeling, and I’ve always loved animals. Now I have a masters degree in animals. It all starts with love. I was a little girl who loved animal behavior, but at university I felt too intimated to study biology. I became a model and an actress, but I still went to lectures on animals, read books on them. When Lancôme let me go, other companies also stopped hiring me too. So I had a lot of time in my hands, my children are grown up. I found the feeling that we all have, dog owners, that they can think, they can ponder – now it’s a science that says old ladies like me are right!

How did the one-woman shows start out?

And a dog named Peter Pan co-stars with you?

Yes, my doggy Pan comes on stage with me. When I started rehearsing, I didn’t know how to make a dog not react to the audience. She went to the audience and started saying hello! I told a stage animal trainer I wanted a small dog that had certain instincts, plus floppy ears and patchiness. Patchiness is a sign of domestic life. [We] contacted several pounds, found one from North Carolina. It turns out Pan’s a very good actress. She remembers things better than I do. I don’t have to rehearse her—she knows all the commands.

How does the show gets booked?

My UTA agent books it for me. I live in Long Island on the farm, but right now I travel six months out of the year. I didn’t think acting would come back into my life! Right now I’m at Sundance, I’m part of the jury. Then when the fest is over, I’m on the road again. Now a lot of museums want me to do a series of funny conferences. In the next year I am working on two lectures in 45 minutes for museum formats. It’s like a whole new genre. It’s important that what you say is scientifically correct. Everything else is laughter. It has to have an element of seriousness. For me it’s very, very important that the research be accurate.

I like it this way. Next I fly to Italy to do a documentary on Pompeii. Luckily, my daughter is also involved with my farm. You’d be surprised—there are now a lot of women farming.

RELATED: Everything You Need to Know About the Return of Frieze Los Angeles

L.A. Music Venues Where You Can Actually Get Something Decent to Eat

The Ask Chris Guide to a Weird and Wonderful Weekend