Home Uncategorized Is This Really the End for Phil Jackson? 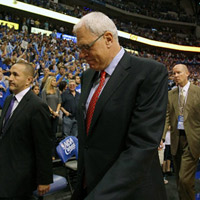 Share
Email
Facebook
Twitter
Pinterest
ReddIt
Walking off the court after the worst playoff loss of his career, Lakers head coach Phil Jackson gave a short wave to the Dallas crowd, along with a flash of the odd half-smirk for which he has become known. It was miles away from his demeanor an hour earlier. The “Zen Master” was uncharacteristically flustered, yelling furiously at his players for their horrendous performance against the Mavericks. As the end of the 4th quarter grew near he became quieter; Jackson seemed resigned to exit the final game of the season with more dignity than Lamar Odom or Andrew Bynum did.
This was meant to be the last year of coaching for the man many have called the greatest coach in the game; the man who guided Michael Jordan, Kobe Bryant, and Shaquille O’Neal, amongst others, to 11 NBA championships. Few could have imagined it would end like this. But is it really over?
“Yes. This is,” he said when asked if this was his final game at a post-game interview.

“In all my hopes and aspirations,” he said, “this is the final game that I’ll coach.”

The former New York Knicks player is 65 years old, with two replaced hips, a bum knee and a history of heart problems. To put it plainly, Jackson is exhausted, and there is little doubt he would rather spend his time retired at his Montana ranch than rehash the problems facing next year’s Lakers team. But is retirement that simple for such a storied champion?

Jackson announced plans to retire in 1998 and then again in 2004, but then returned to coaching. If he does decide to return to the court again, it may not necessarily be with the Lakers; the New York Knicks may be seeking an experienced hand to shape their young, star-studded team. Coaching the USA Olympic team might also have it’s appeal, given that success in that field is much more likely than in the NBA.

Jackson is a coach who has always had a deep affection for helping develop young players into successful superstars. His drive and motivation for success may not be as tangible as the on-court efforts of Jordan or Bryant, but it exists nonetheless.  Of course, few would blame Jackson — an avid fly-fisherman — if the call of Montana’s mountain streams proves more tempting than another year on the court. Yet, leaving the NBA for good on the heels of such a embarrassing second-round sweep will be a tough pill to swallow for a coach like Jackson. It’s enough to make you wonder whether he will be taking the road to retirement after all.