Home Uncategorized Is the Headshot Truck the Most L.A. Thing to Ever Happen to... 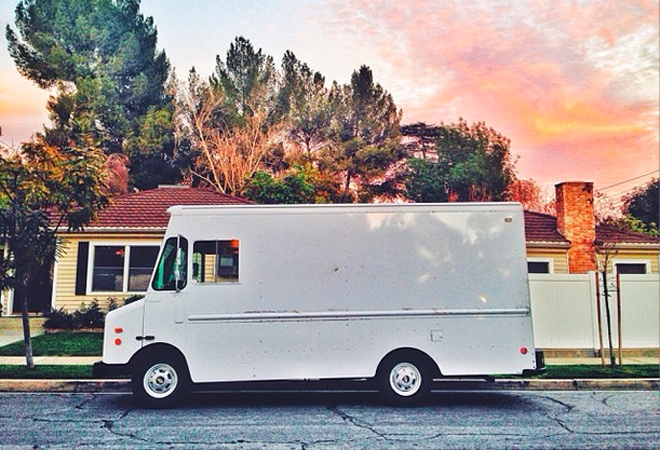 Forget the duck-lipped selfies. The Headshot Truck, a rolling photo lab, will soon be cruising Los Angeles, ready to photograph you in all your glory.

The brainchild of actor-turned-photographer Adam Hendershott, the mobile studio aims to create professional headshots on a modest budget. An average package costs $250 and includes two looks—and that comes with style advice. (Ditch the neon skinny jeans and go normcore if you want to land that sitcom role.) As they’re being photographed, customers can see each image immediately after it has been taken so they know what to change for the next shot.

Hendershott, who came up with the idea after getting fed up with his own terrible headshot experiences, says he never understood why other photographers charged an arm and a leg for what’s “only a photo of your face. You really only need one good shot with a little bit of drama.” He and his crew of five people rented out a truck to see if the crazy idea could work. When it succeeded, Hendershott launched a Kickstarter campaign that aims to raise $20,000. The fundraiser, which ends April 30, has already received more than $21,000.

Hendershott has already purchased the truck and is outfitting it with an air conditioning system, essential so that would-be Zooey Deschanels and Zac Efrons don’t get sweaty while they’re finding their best angle. Hendershott also plans to wrap the truck with a colorful logo. When asked what he’d do if the Kickstarter campaign raises additional funds, Hendershott mentioned “pimping out the truck in an eco-friendly way,” perhaps with solar panels.

Although the Headshot Truck’s target clients are, per Hendershott, actors “from Arkansas who may not know any better” about the ins and outs of headshots, at least one well-known thespian, Lost’s Jorge Garcia, has been photographed in the truck. Hendershott says he approached Garcia (you may know him as Hurley) who is a friend from an acting class, and the actor agreed to hop into the Headshot Truck because he always needs updated, quality images for when he makes talk show appearances.

What’s in store for the Headshot Truck? Hendershott says he wants the business to branch into shooting corporate headshots and hosting private parties. Next time you’re traipsing around L.A. keep an eye out for the Headshot Truck hanging out in local parking lots and at studios, ready and open for business.