Home Uncategorized Is “The Greatest Event in Television History” Coming Back to TV? 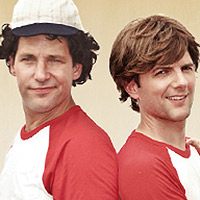 In October of 2012, Adam Scott gave the world a wonderful gift: The Greatest Event in Television History.

The “event” was a shot-for-shot remake of the opening credit sequence for ‘80s series Simon & Simon (in which Scott and pal Jon Hamm played the titular characters). The redux was prefaced by a brief “making-of” mockumentary hosted by Survivor’s Jeff Probst, who added another layer of self-referential humor to the mix. The result was surprisingly hilarious and unbelievably precise, making it weirdly worthy of its hyperbolic title. (If you don’t believe us, watch the inaugural episode above.)

Scott followed up with three other episodes in which he recreated the openers for Hart to Hart, Too Close for Comfort, and Bosom Buddies, but it all came to a halt in January of this year when, within the first minute of the fourth installment, Probst announced that Bosom Buddies would be television’s true and final Greatest Event.

In an interview for our July ‘80s issue, Scott made it sound like more episodes could be on the horizon (insert 1,000 confetti Emoji here). “They’re a huge pain in the ass,” he said. But? “I mean maybe, I don’t know…I think Adult Swim would be into it.” Yeah, so would the rest of the world.

As for which shows would get the GETH treatment, Scott shared his dream lineup: 90210, Magnum P.I., and Riptide. “Those would be the ones if we decided we wanted to do it all over again,” he said.

In fact, Scott said 90210 was originally slated as episode three before Too Close for Comfort took its place. “We were almost to the point of no return with it,” he explained. “We got Rob Lowe to be Jason Priestley’s character, I was talking with [Jon] Hamm about being the Luke Perry character, I was going to try and do the dad, Elizabeth Banks was going to be Jennie Garth’s character, and Brian Austin Green was going to play himself. Just be Brian Austin Green. But we would’ve needed all of them for like six days, and it was impossible.”

It’s still unclear whether Greatest Event will officially return to the airwaves, but we’re secretly hoping that, outside of his new stint for Smirnoff, Scott has nothing better to do than to keep reliving the shows of his childhood.