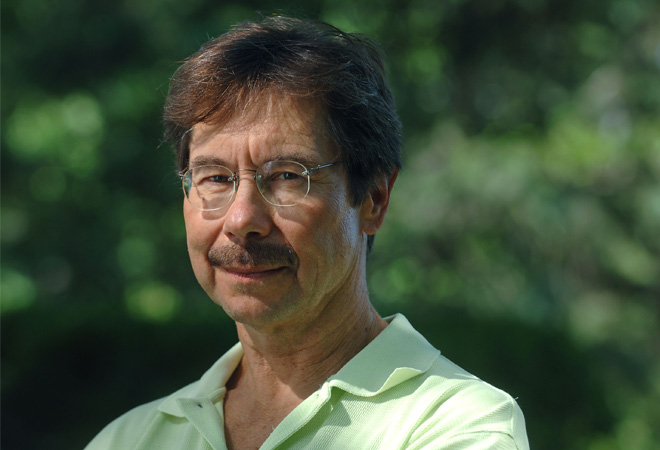 Either way, he returns this summer with not one but two new books, both of which were released on June 3. Paper Lanterns is a collection of nine love stories and Ecstatic Cahoots contains fifty short stories, ranging in length from two sentences to five pages.

The stories in Ecstatic Cahoots are the literary equivalent of photoblog Humans of New York. Quickly told but deeply felt they don’t reveal the whole story; they show tiny slivers of life. From the holocaust survivor who serves sandwiches to a nun who steals a streetcar, Dybek’s stories follow the characters through one moment in their lives.

He writes the way the mind works, with no regard for time or linear storytelling, looping his tales back on themselves so the beginning becomes the ending. “The Start of Something” begins with a man buying a pair of pants from an estate sale. A woman sitting near him on a bus comments on his pants and during a lull in their conversation he contemplates continuing this relationship to its full completion. In his mind they love, they fight, and they fall apart, all while he sits quietly on a bumpy bus ride.

He also delves into the surreal. “I Never Told This to Anyone” imagines the figurines of a bride and groom atop a wedding cake as they come alive and visit a boy in his room. As time goes on, the couples’ clothes wear out and memories of the honeymoon fade.

The nine stories in Paper Lanterns are more traditional. The longest, “Four Deuces,” is narrated by a female bartender who was jilted by a former lover she refers to only as “Frank that son of a bitch.” We watch their relationship travel evolve from love and lust to deception and retreat.

Dybek is on a month-long book tour during June. Though he doesn’t have any stops in L.A. he talked with us about his love of the short story, getting undergrads published, and the novel he’s working on.

Why did you release two books at once?

The author Tracy Kidder and I have for at least ten years arranged our life so that every April he and I can go to the Keys together. We rent a house, we rent a boat, we rent a car, split everything down the middle and pretty much live off what we catch fishing. We spend the rest of the time critiquing one another’s work from the past year.

Two years ago, the day he was supposed to come, he got word that his mother, who was well into her 90s, was failing. He wasn’t able to come and I was already out there so I had that entire month by myself. Instead of having a power boat all I had was a kayak, so I went out every day and I got a fish for dinner and then the rest of the day I worked. It wasn’t until that month that I realized I had two books. It came as a surprise to me.

What followed was a year-and-a-half of top-to-bottom reworking. In some cases the kernel of the story became a different story.

I teach a grad and an undergrad workshop. When I first put the course together I put in some stories that Italo Calvino wrote when he was only 20 or 21. They weren’t his best work but they were impressive for a guy that young. The kids in the class were the same age, and I wanted them to see what somebody their age was able to do.

One of the things that teachers observe is that you can get young writers who write beautiful sentences but don’t have anything to write about yet. The thing about this class is, because it relies so heavily on imagination and making up fantastical stuff, it kind of jumps the crux, that barrier.

Do you think you’ll ever write a novel?

When I handed in those two books of stories I actually handed in three manuscripts and the third one, I haven’t decided whether it’s a novel, a memoir, or a non-fiction novel. The main character has got my name and the title of the thing is Saint Stuart.

LeVar Burton Would Like to Read You a Story

7 Ways You Can Impact Climate Change Right Now, According to a NASA Scientist