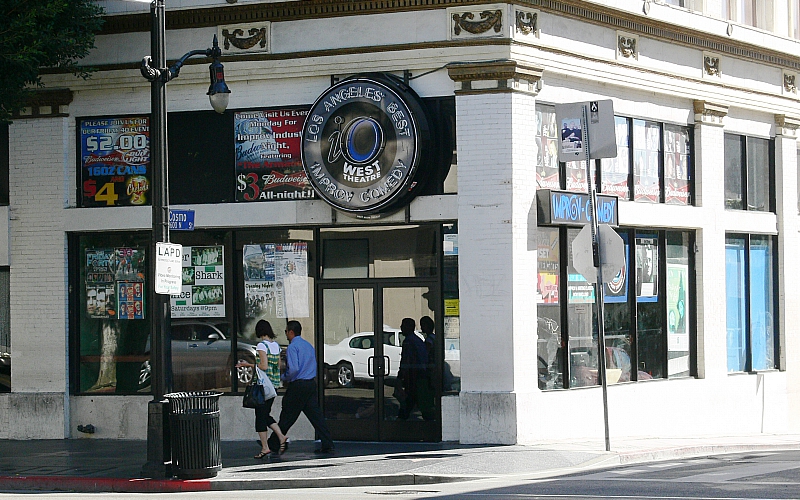 After more than two decades in Los Angeles, iO West, the Hollywood Boulevard comedy institution that housed a school, theater, and bar, survived a car crash, and became a second home for thousands of comedians including Dave Holmes, Rob Delaney, and Jordan Peele, is closing. Charna Halpern, the theater’s co-founder, broke the news in a tweet on Tuesday afternoon with little warning and no explanation.

In a Facebook post later that day, iO West cited financial difficulties as the reason for its sudden closure, which comes a year after the theater’s artistic director, James Grace, was ousted following multiple sexual harassment allegations, some of which dated back a decade. The shuttering of its West Coast outpost — its flagship Chicago location will remain open — came as a shock to many of its students and alumni, some of whom are now scrambling to find alternate venues for programming they’d already scheduled. The theater’s last shows will be held on February 24—a goodbye party is in the works—with classes wrapping up the following day; fees paid in advance for next term’s classes will be refunded.

Initially known as ImprovOlympic, iO was founded in Chicago in 1981 by Halpern and Del Close, who wrote the book Truth in Comedy: The Manual for Improvisation, and developed the influential Harold style of improvisational comedy taught to then students like Chris Farley, Seth Meyers, John Favreau, and Vince Vaughan.

Its famous alumni also include Matt Besser, Amy Poehler, Ian Roberts, and Matt Walsh, who went on to found iO’s arguably more popular competitor, the Upright Citizens Brigade, based on iO’s Harold style of improv. When iO West opened in Los Angeles in 1997, initially in the Complex Theater on Santa Monica Boulevard, it became a haven for Chicago-bred comedians like Ike Barinholtz, who graduated from iO in Chicago in 1996 and didn’t want to have to start from scratch taking classes at comedy schools like the Groundlings just to earn some stage time. “When I first moved to L.A., the only place I could really go to was iO,” says the MadTV alum who stars on The Mindy Project. “That’s my theater.”

On Facebook, Besser remembered iO West as the first place he performed improv in Los Angeles. Holmes, meanwhile, called it the “scrappier, weirder,” version of UCB, “full of people who did it for the love of it.” Beloved by many as more than just a school where comedians had free reign to develop their own styles, iO West was also a social scene—thanks in part to its on-site bar—where comedians made lifelong friends, met their spouses, and hosted memorials for loved ones. We asked five of its alumni to share their favorite memories of the place where they laughed, they cried, they drank, and they performed with a talking clitoris. It turns out we all missed the epic two-man show performed there by Ike Barinholtz and Jordan Peele to an audience of four. (Interviews, conducted over phone and email, have been edited and condensed for clarity. )

“I was on a team in my early improv days and my mom flew into town and she came straight from the airport to a show; she’d never seen me do improv before and suddenly I’m on somebody’s shoulders and his [character’s] head, in perfect position, became my clitoris. A talking clitoris! I had a grounded relationship scene with a talking clitoris. It was the dirtiest show I’ve ever done in my life. My mom loved it. She thought it was very funny. All of the other theaters, they’re all great, but they don’t have the bar where you can just hang out. [A couple years ago] we were all in the bar and it was completely packed, and I was in [a show] that was playing on the TV but with the sound off and I had one line, but every time they cut back and forth to my face, the bar erupted and was just saying my name. It would be like ‘Molly!’ And then it would be quiet. And then they would wait. And then ‘Molly!’ It started off kind of quietly but people caught on. It was like an improv show was happening in the bar, and it got bigger and bigger and bigger and by the end of it everyone in the bar was screaming every time my face came on the screen.”

“iO West was the first improv school in LA. .to feature what so many other schools have tried to create only years later and still with limited success: an all-in-one location where the classes, shows, and cool hangout spot were all in one place. After any class you could run downstairs to catch a show, or grab drinks with your friends. And before the area cleaned up a little with fancy sushi restaurants opening next door (and it’s still not that cleaned up) you always felt a little sense of danger that you were in the middle of Hollywood and anything could happen on or off the stage. Andy Dick would frequent parties at iO West in the earlier days I took classes there (around 2006), and when he was drunk he was notorious for hitting on people of any gender. If he didn’t get any interest from a guy he hit on, he’d move to the girl next to them. It was like a right of passage and you almost felt insulted if you weren’t hit on by Andy Dick.”

“The thing about iO and really a lot of improv theaters and regular theaters is, it’s tough to get people to come sometimes. I remember I did a two-man show with Jordan Peele and we were so excited because Jordan and I had been performing together since forever and we were so excited to do a two-man show and we came on stage and the lights came up, I think there were a total of four people in the audience. I don’t know why. We had like a 7 p.m. Tuesday spot and in L.A. a lot of people flake. I remember walking out and seeing nobody in the audience. Jordan and I had such a good show. I wish more people would’ve seen it.”

“My boyfriend, John Norris, and I were friends before we started dating. The night that I performed my one-woman ninja musical (yeah that’s real) on the iO West main stage was the night he realized he was in love with me. There I am in this ninja costume dancing around on stage and John’s thinking, ‘I love that little weirdo.’ There are so many important, deeply personal moments I’ve shared in that theatre. It’s not just losing the ability to perform in that stage that makes us all sad. It’s those precious real-life moments we all hold dear that makes us feel we’ve been socked in the stomach a little. Life happened there! iO West was one of the important center pieces in my relationship. I always imagined that when John proposed we’d like revisit those important places to us (corny I know) and iO would have been one of those places.”

“In July 2010, a man by the name of Bryan Burgess suddenly died. He was gregarious, friendly, comically unkempt, just an all-around wonderful dude. He was an improviser and sketch performer at iO, and an omnipresent fixture at the bar on late nights after shows. Bryan died on a Thursday night/Friday morning, and if my memory serves me correctly, by that Saturday evening, a memorial was held for him on the iO main stage. His father was there, his closest friends; it was a real Irish funeral type vibe as the bar was open for business much earlier than usual, but it was such a communal showing of love and support and life celebration. Of course folks broke down at the podium (over-libated as they were) but the one thing I’ll never forget, that I have never experienced since, was the collective struggle to not break down…when Bryan’s dad rose to speak. In the theater that has housed some of the greatest hall-of-fame heavyweights of all time, hosted riotous explosions of pure joy, it was the heavy, somber silence, punctuated by 200 curt, sniffling noses, remembering a dear, dear friend, that always hammers home the fact that the iO was more than just a money machine for Chicago, and more than just a theater for the students and performers.”