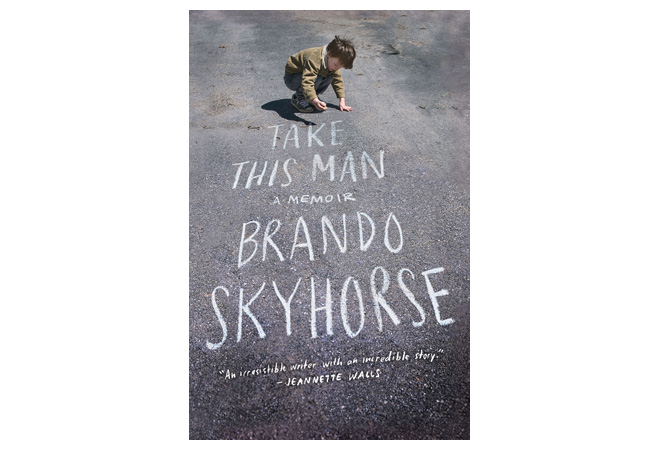 Brando Skyhorse didn’t know he was Mexican until he was twelve, maybe thirteen. He had grown up in Echo Park believing he he was the son of incarcerated American Indian political activist Paul Skyhorse. It turns out that it was one of many lies spun by his mother. He wasn’t Native American and when the man who was posing as his father was released from jail, his mother found another prisoner to continue pretending he was Brando’s father.

Take This Man centers around Brando’s attempts to figure out who he should call father, not an easy task. His mother had invented so many dramatic stories about her life that it was difficult to tell fact from fiction. She claimed she had nearly been killed by Ted Bundy and that Marlon Brando was her son’s godfather. Little of what she said was true except for the assertion, “At least it’s never boring.”

Over the course of his childhood Brando’s mother would marry four times and have at least as many names. Each time one of these men left, she removed all pictures of him and when a new one arrived Brando was expected to call him “father.” These men were mostly thieves, drug users, and liars who fled after a few years, leaving Brando searching for a new dad. “I was father rich but family poor,” he writes.

Brando eventually went to Stanford and received his MFA from UCI. After winning the PEN/Hemingway award for his first novel, The Madonnas of Echo Park, he decided to start work on his memoir. It is a beautifully written and heartbreaking account of a boy’s search for a family.

Brando sat down with us to talk about growing up in LA and the difficulties of recreating your childhood when you don’t know how much of it was real. He will read at Skylight Books on Wednesday, June 25, and at Vroman’s on Friday, June 27.

In the book you mentioned that you read Los Magazine magazine when you were growing up.
I did! Kelly Marcel, the person who tried to option The Madonnas of Echo Park and get it made into a television series, discovered the book through a tiny little review in Los Angeles, so I have a lot of warm feelings for the magazine.

You’re living in New Jersey now?
Yeah, I’ve been dividing my time between New Jersey and Bushwick, Brooklyn. I’ve recently moved in with my girlfriend so it’s sort of an influx situation. But Jersey City is where I’ve been planting my flag for the past 15 years I think.

When you come home now, where do you have to stop?
I recently found where my biological father is living, Whittier with his three daughters, so I have three new sisters. So that is now a place I have to go. My family is there! I still go to Echo Park. I don’t get out to Los Angeles as much as I’d like to, but every time I go out there I have to drive through the neighborhood and take a walk down Sunset Boulevard and to the lake and kind of see where things are.

The Madonnas of Echo Park sort of imagined what gentrification would look like. I knew it was coming, I just didn’t know it would come so quickly. The last time I was there, about a year ago, I was astonished at the changes. The apartment buildings, the renovations, the new businesses. It’s surprising.

What made you decide to write this memoir? Was it sparked by one thing, or was it people who kept telling you “You need to write this stuff down!”?
I think it’s probably both. The single incident was being at the UCI writers workshop. I went there from ’95 to ’97 and I studied with Geoffrey Wolff, who wrote the extraordinary memoir Duke of Deception. We got to talking and I think he just sort of suspected that I had a deep reservoir of material to draw from. He has this intuitive mind and he was like, “You know, you should write this down and maybe start taking some notes.” That was in ’96, so I’ve been thinking about this book for about 18 years.

Whenever I meet people, they go, “Oh, your name’s Brando Skyhorse. What’s the deal behind that?” People seem to be interested in my background, and I wanted to find a place finally to put it down. Just to write it down somewhere so I could actually look it over and evaluate: How does a young Mexican American from Echo Park become some guy named Brando Skyhorse? It still surprises me!

I love narratives. I love stories. My grandmother got me into storytelling and books from a very early age. So to have my story in one place and one book, it’s like I can now understand my story because it’s written down in a book somewhere.

Was it hard to piece together what actually happened?
I did a fair amount of research. It was problematic because my mother and grandmother both passed away in the late ’90s. But I realized that was actually an asset because if I had access to my mother she would have lied anyway; it wouldn’t have made a difference.

So I did do a little bit of research. I checked the prison records and my mom left some writings from a memoir that was in process; I had access to that. I spoke to my biological father, Candido, to see if he could fill in some of the gaps. One crucial figure who really helped me piece a lot of it together is the person I consider my father now, his name is Frank. He’s in the book. He’s sort of the emotional pillar through the entire memoir. It was really helpful to ask him, “Do you remember that thing that my mom did? Was it really that crazy?” He was really crucial.

I think Frank came off wonderfully in the book, but it’s not necessarily the most flattering portrait. He was very supportive and said, “This is the truth. This is what happened. Write it down. It all has to go in the book.”

It’s great that you had that support.
Yeah, obviously I have a complicated relationship with fathers, so it was nice to have him offer that support. One of the things through the book is: How do you form a relationship with this man who basically was in his twenties when he dated my mom for a short period of time and basically became a surrogate father to me? We spent years trying to figure out what the nature of our relationship is. Doing this process has been clarifying for both of us because now we can call each other father and son. Almost. We do still slip up sometimes.

I think a lot of people reading the book will be rooting for a happy ending.
I wanted to have that ending but I also wanted it to be authentic. When people read memoirs there’s always that desire to make sure that everything’s better now for the person who wrote it. I’ll be the first to admit, everything is not perfect, but given the background that I’ve had, it’s stable and it’s real and it’s not something that is totally calamitous. There’s always going to be some kind of damage when you live this kind of life. I survived, but there was a cost.

You turned this in a while ago. Have you been working on something else since then?
I wish! The book was sold in 2009. I turned in my first complete draft in December 2011. It’s basically taken me two solid years of revision to get to the point where we could go to production. The first drafts I turned in were awful. They just sucked. My editor, Millicent Bennett, worked with me over two or three completely different drafts to figure out how to tell the story. This was a marathon so I think I’m going to take a break for a while, but I am thinking of something new. It will definitely be fiction, because non fiction is hard. Non fiction memoirs are really hard!

What was so hard about this book?
The first draft I turned in, my editor kept saying, “Where are you in the book?” And the thing that was that when I was telling these stories about my mother or my stepfathers I always seemed to be the least interesting person on the page. And she had to remind me that none of that matters if we don’t know who’s telling the story. We don’t care about them; we only care about them in relation to you. When my mom was alive I was used to her taking center stage. She wanted the limelight and I was happy to give it to her. That’s the hard part: finding that balance between reporting what you’ve experienced and putting your own experience on the page in the same way.