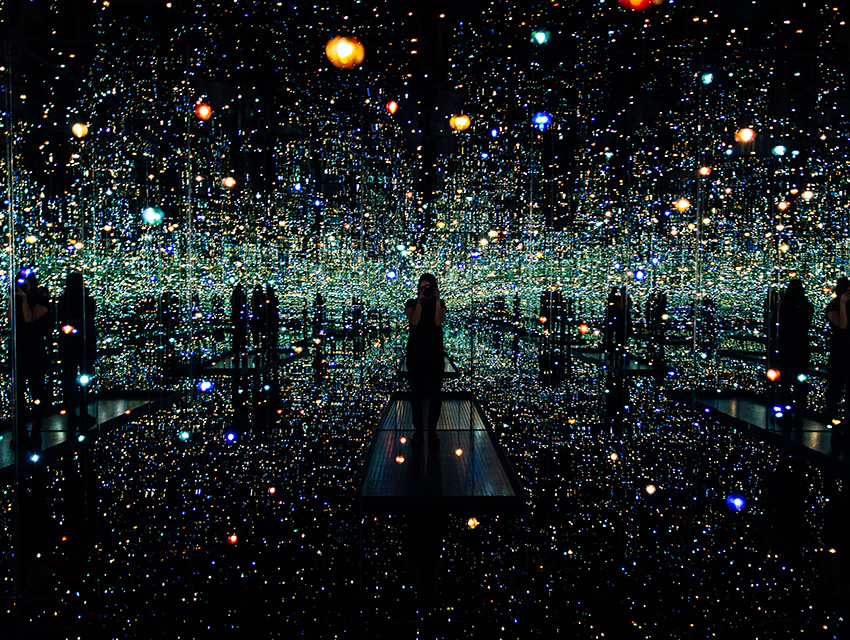 Less than two hours after going on sale in early September, 50,000 tickets to the Broad’sYayoi Kusama: Infinity Mirrors exhibition had sold out. In part, that’s because Kusama’s reputation precedes her—she’s been making polka-dot covered, larger-than-life paintings, sculptures, and dazzling mirrored installations since the 1960s. But there’s also a distinctly modern reason for why the Broad sold an additional 40,000 tickets to this exhibit: Instagram.

For many, the app has morphed into, among other things, a stunning visual ledger of our experiences with art. Last year, for instance, everybody’s feed seemed to include a painting from the popular Kerry James Marshall exhibit that premiered at the MCA Chicago before posting up at MOCA. Now, some exhibits are tailor-made for social media, like the Museum of Ice Cream, a pop-up installation in DTLA where Angelenos can take selfies against ice cream themed backdrops or in a pool of sprinkles, and 29 Rooms, a similarly colorful and Instagram friendly exhibit, the latter of which opened December 7 and had to add a second week after its first sold out . Even installations not primarily built with Instagram selfies in mind, like Rain Room and James Turrell’s Breathing Light installations, both at LACMA, have nonetheless proven to be very popular with the platform.

But no modern art exhibit has captured the attention of the Instagram-obsessed quite like  Yayoi Kusama’s six infinity rooms at the Broad. Ever since her 2013 Infinity Mirrored Room–The Souls of Millions of Light Years Away opened as part of the Broad’s permanent collection, people have waited hours in line to take a selfie among those seemingly endless points of light. Since the expanded exhibit opened in late October, Instagram users have posted more than 40,000 photos with the #InfinityMirrors hashtag.

A cynic would say that people are doing this merely to show off, stay on trend, or stoke the envy of friends and followers. In fact New York magazine ran an article on The Cut with the headline “Everyone at the Infinity Rooms Is Doing It for the ‘Gram.” But some artists and curators see this behavior as enhancing the art’s power and purpose.

Jason Ostro, who owns the Gabba Gallery in Historic Filipinotown, has found that the platform has allowed a wide age range of people to discover art, from millennials to his 70-year-old mother. Ostro has found Instagram particularly useful when it comes to finding muralists for the Gabba Alley Project (which uses street art to combat urban blight in various L.A. neighborhoods). He discovered one participating artist, the Spanish muralist DourOne, after seeing the latter’s DTLA mural on Instagram. He’s even able to persuade certain artists to work with him by geeking out over accounts both parties admire. “Next thing I know, it’s created a community,” he says. “It’s a great research tool.”

Sarah Loyer, assistant curator at the Broad, who was in charge of the Kusama exhibit, feels that people’s experiences with the installations add to its ever-evolving relevance: “Something that’s really interesting about this Instagram phenomenon around her work and specifically around the infinity mirror rooms is the fact that she started making them in the mid ’60s. At the time, they were experimental new-media works, and they still feel experimental and new media.”

Kusama asks the audience to reflect on the concept of endless repetition and obliteration, and Loyer thinks that this is why the rooms work so well on social media. “When you’re posting a picture of yourself in [a mirrored room], that act of posting the picture is doing what the work itself is already doing,” she says. “You’re putting yourself out on social media to be replicated. But you’re already having that experience as well inside the room.” At the same time, Instagram privileges the individualistic interpretation of the work. “You really become the subject of the artwork that is reflected all around you,” she adds.

Jihan Zencirli, an artist whose large-scale balloon installations have earned her 144,000 followers on Instagram, feels the impulse to share is related to the yearning for community, an idea that was amplified for her after she traveled to Italy to see Jeanne-Claude and Christo’s The Floating Piers, which invites people to walk on water over their nearly-two-mile long yellow carpet. “There were dogs, there were strollers, there were people in wheelchairs, there were teenagers in love, there were people who lived in the neighboring village who never heard of Jean-Claude and Christo, but arrived to see this magical experience of something as simple yet stunning as a saffron covered floating walkway over a lake,” she says.

So, yes, maybe people flock to the Museum of Ice Cream solely for the selfie. But if art has the power to forge connections among disparate groups of people, then arguably Instagram only enhances that power by incentivizing institutions to consider work that will draw crowds who might come for the selfie, but stay for the Cézanne. “People are building these experiences to bring you there, [but] you can go to these experiences and not just ’gram the photo,” says Zencirli. “You are a part of the art piece.”

Sophia Li, 22, who works for a local housing non-profit, had a similar motivation when she posted a photo of herself in front of Barbara Kruger’s photograph of a crown emblazoned with the words You are a very special person (also on display at the Broad). Li says she coincidentally wore a red shirt that happened to coordinate well with Kruger’s piece, yet it underscored the connection she felt to the photo and what it’s doing. “I feel like that’s my aesthetic–feeling myself and dragging myself at the same time,” she says. She saw the Infinity Mirrors exhibit during the same visit, and had expected it be underwhelming given its social media exposure. “When you actually step in the rooms, it’s so different than what you see in just a single picture,” she says. “It feels tiny but endless at the same time.”

Meanwhile, the museum has launched the social media campaign #InfiniteLA, which features video interviews with prominent Angelenos about how the exhibit relates to their work and lives. Each video features a question of the week for the audience regarding how they connect to the concepts explored in Kusama’s art. In one, n/naka head chefs Niki Nakayama and Carole Iida-Nakayama talk about not following the traditional path in their field, like Kusama. “The ability to have so much freedom in choosing what we want for this restaurant to be, and for it to not have to be traditional, or to incorporate ingredients that aren’t traditionally Japanese, or techniques that aren’t traditionally Japanese, but still keep in line with the philosophy has been very liberating,” Niki says.

“Part of what we’re trying to do is give more insight into the artist and her greater practice, and the other ways that people can engage with it,” says Loyer. “It’s not all related to taking pictures.”

RELATED: The World According to Kerry James Marshall