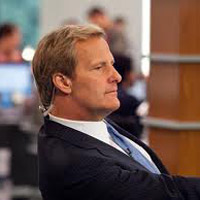 Plenty of critics—both professional and otherwise—weighed in on the debut episode of Aaron Sorkin’s new series, The Newsroom, which premiered on HBO last week. Between the buzz and the backlash, we were left wondering how realistic the show is for the writers, reporters, and producers who live in the real world that the drama explores. KTLA Morning News co-anchor Wendy Burch weighs in before catching episode two.

Audiences are Shrinking
By the time people get home from work, they’ve seen the news online or on Twitter. As an industry, we’re trying to figure out how to stay competitive and efficient without losing sight of the high standards that have been passed down by great broadcasters like Edward R. Murrow.

Romance is in the Air
It happens much more in newsrooms where you have younger people. In an industry where you work so hard and such long hours, and your friends are the people you work with… My first markets were just dens of iniquity. That’s what makes newsrooms so interesting.

Presidents are Present
At times of big breaking news stories, it’s not uncommon for an executive to come in. I can remember a time when the news director was at a computer helping a producer with a rundown. When it’s all hands on deck, you do see that.

The Set
It’s dead on. Their set looks like any newsroom that I’ve worked in. How the anchor is live on TV and the newsroom is behind, that’s exactly right. You scurry across if you’re behind the shot—and you saw that in the scene.

The Lead In
It’s totally common to have a producer in your ear while you’re seconds away or even while you’re speaking. I usually shut up by the time I heard [the last syllable of my name]. But there’s a rhythm to it. At KTLA we do a lot of two-shots, and when one person is answering a question, a producer is often suggesting the next.

Newsflash: There’s No Red-Coded Newsflash
We have AP alerts, sure, but they aren’t color coded. At first I was wondering what system they were on. Red and yellow to tell us how important the new is? That would be helpful, but no—it does not work like that. But it was dramatic for storytelling.