Due to the pandemic, this year’s event marked the first Smokin Grooves in SoCal since 2019, when it was held in Long Beach at The Queen Mary. The festival, which has the tagline “amazing energy and good vibes,” had a communal energy that at times felt like a family reunion. 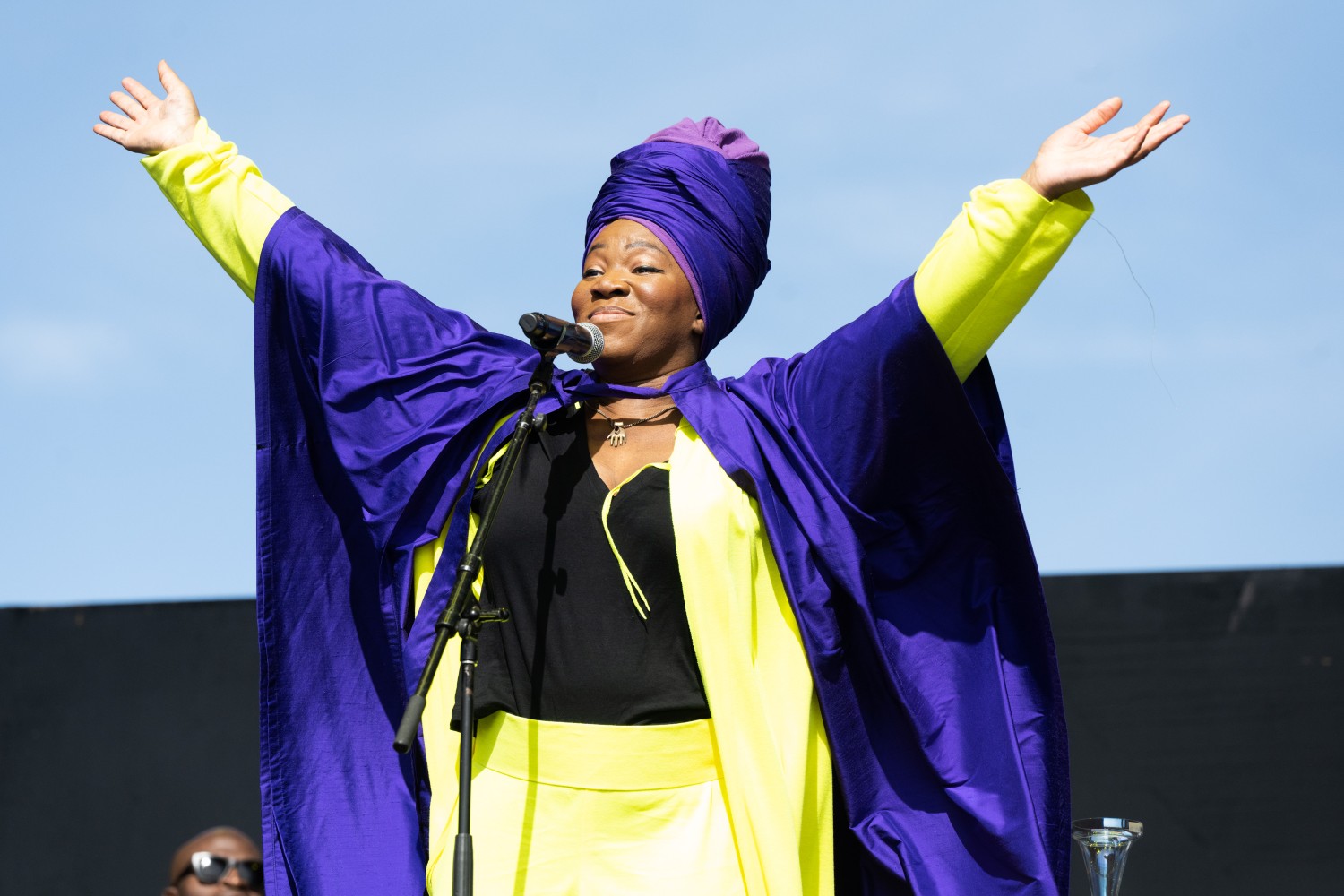 At some music fests, lesser-known acts perform early in the day, but at Smokin Grooves a handful of veteran artists graced the stage well before sunset. Festival-goers who arrived in the late afternoon might have missed memorable sets from Philadelphia crooner Bilal, who took the crowd to church with his surreal vocal abilities and impressive backup band. Also on the early side was a captivating showcase from India.Arie, who transformed her set into an intimate, healing experience, along with R&B vets Angie Stone, Macy Gray, Goapele, Leela James, and Musiq Soulchild, as well as rapper-producer duo, Blu & Exile.

But by dusk, festival goers had to make some tough decisions on which act to watch at one of the park’s two stages—the Jupiter or main Smokin Grooves stage. Witness Los Angeles alternative R&B band, The Internet, or opt to see funk-jazz pioneer Roy Ayers who turned 81 in September? Experience Slum Village with head-knocking production by the late legendary rapper-producer, J Dilla, or a showcase from L.A. vocalist-bassist, Thundercat? Watch The Roots, or check out dynamic Swedish quartet, Little Dragon?

Regardless of what choices the attendees made, they weren’t likely to be left disappointed as each of the acts on the thoughtfully curated lineup knew how to put on a show.

Although it’s a great problem to have if you’re a fan of most of the artists on a festival bill, the back-to-back sets—made possible by a two-sided turning stage—caused logistical issues as the day progressed. Some early acts had their mics cut off mid-song, and headliner Erykah Badu’s set was sliced in half due to a city sound ordinance that took effect at 11 p.m., leaving the audience confused as to why Badu’s set ended so abruptly.

The “Window Seat” singer took it in stride.

“Questlove always told me the headliner spot at a huge 1-day concert festival is the worst slot,” she said in an Instagram post. “Because when curfew comes & you aren’t even 1/2 way thru the set, they will cut the mike. When things run behind that night, the headliner has to take the weight. But still, I give my all. Love you guys. Grateful.”

When Badu left the stage, as if on cue, a cloud that had been sprinkling the festival with a light rain throughout the evening finally let loose a torrent.

But even as people began to trek toward the exits, the crowds remained in high spirits, discussing their favorite sets, while some were already wearing the festival gear they’d just purchased.

Despite the sudden end of Badu’s set and a few audio issues throughout the festival, there was still a sense of gratitude in the air from the scores of music aficionados who hadn’t experienced a live music festival since the pre-pandemic days. Though it wasn’t picture-perfect, Smokin Grooves provided just enough to leave fans feeling recharged, filled up, and ready for the next one.

Below we’ve compiled some of our favorite moments from the music festival.