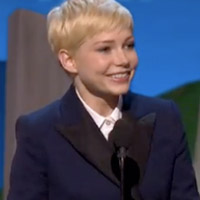 Seth Rogen put on his best “California casual” suit Saturday to host the 27th annual Film Independent Spirit Awards on the beach in Santa Monica. Before taking their seats inside a large tent set up just south of the pier, celebs like Bryan Cranston (looking extra dapper with a beard and scarf), William H. Macy, Patricia Clarkson, Lucy Liu, Anne Heche, Goran Visnjic, and John Hawkes caught up with producers, directors, and publicists—the kind of people who get thanked from the stage of an award show—in the sunny parking lot-turned party space.

Although the show didn’t have any super memorable surprises this year (this is, after all, where Mikey Rourke once planted a wet one on his The Wrestler director Darren Aronofsky before thanking his dearly departed Chihuahua and calling Hollywood out for turning its back on Eric Roberts in his five minute-long acceptance speech), it retained its cool kid vibe.

After nabbing the Best Actress award for her turn as Marilyn Monroe in My Week With Marilyn, Michelle Williams remembered attending her first Spirit Awards ten years ago. She wore her own clothes and did her own hair and makeup for that event. “I still remember the feeling that in the room, unlike others, that was okay, possibly even preferred,” she said. “I want to say thank you for supporting me and welcoming me and making me feel at home in this room, all the way back then and now.”

It’s a sentiment Jameson Find Your Audience Award winners Benjamin Murray and Alysa Nahmias echoed after the last trophy was handed out. “Her speech said everything,” said Murray. “[But] ten years? Hopefully we’ll be back before that.”

Audi Someone to Watch Award
Mark Jackson, Without

Nokia Truer Than Fiction Award
Where Soldiers Come From