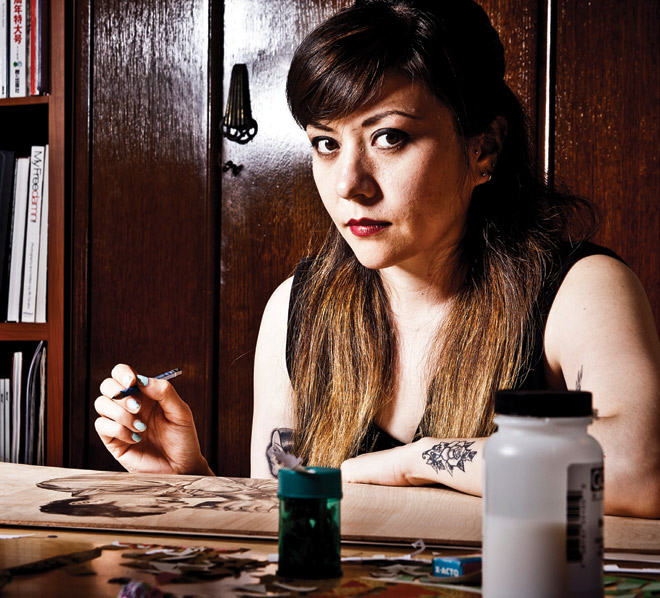 Her canvases have ranged from bedsheets and handkerchiefs to plywood and notebook paper, but it wasn’t until she turned to the human epidermis that Shizu Saldamando’s career took off.“The more I showed my work in museums and galleries, the smaller my audience got,” she says. “I needed to find a job that informed my art practice.”

Last year the 35-year-old artist began apprenticing at the East L.A. tattoo parlor Old No. 13, where she learned to wield a tight three needle as deftly as she does colored pencils and ballpoint pens. Nowadays, whether it’s Odilon Redon’s famous eye balloon inked on a biceps or ten panels created for the Metro station at Palms and National, her meticulous style embodies the cross-pollination of classic and pop art.

That fascination with youth subcultures—gay, Latino, punk—and unabashed love of rock stars will be on display at Saldamando’s first solo museum show, a survey of her drawings, paintings, and videos opening September 10 at the Vincent Price Art Museum at East L.A. College. Just don’t expect any works on live skin. Joel with Gran Legacy
2013
“This is my friend Joel, who had passed out after a night out. There was something very beautiful and painful in his self-medicated slumber.” Gerardo Posing
2007
“My friend Gerardo and I were at a lesbian bar, and I took pictures of him dancing. I used oils on cheap plywood with a little bit of glitter for the cigarette smoke.” Sandy Switchblade
2013
“This piece is of my friend Sandra and her amazing hair. She lives by the mantra ‘The bigger the hair, the closer to God.’ ” Carm’s Crew
2008
“These are friends from Downey outside some club in Hollywood where they had a reunion of Café Bleu, a British pop club that used to happen in the ’90s.”